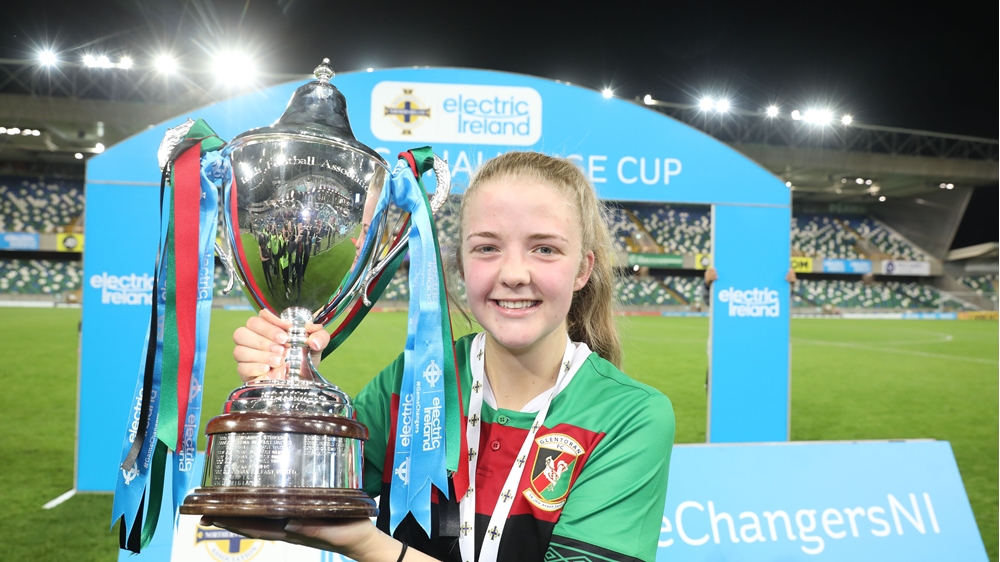 Glentoran Women match winner Emma McMaster says the belief among the squad helped propel them to victory in the Electric Ireland Women’s Challenge Cup final at the weekend.

The Glens made it back-to-back successes in the competition with a second consecutive win over rivals Linfield at the National Football Stadium at Windsor Park on Saturday evening.

McMaster took a gamble after Blues stopper Lauren Perry parried Demi Vance’s rasping 30-yard effort in fifth-minute, pouncing to put the holders in front.  Her early strike proved to be the difference between the two teams and meant the east Belfast outfit bagged a record eighth cup title.

“It was unbelievable,” McMaster told irishfa.com, “I really didn’t think I was going to get on the end of it, but I was glad I did. It started us off well and the team just grew in confidence. We just pushed on and didn’t give up.

“I knew Demi was going to take the shot; she normally does. And I know Lauren is a good keeper so I knew she was going to get something on it but I just took a chance and I was lucky enough to get on the end of it.

“We’re known at the ‘Big Two’ and for Glentoran to win the trophy back to back against Linfield is a massive achievement.”

For McMaster it was her first goal in only her fourth appearance since her move from Cliftonville.

“It’s not a bad start to my Glentoran career! I’m just glad that I can make an impact on the final and all of the girls put in such a shift from the first to the last minute. It’s been a brilliant experience," she said.

“We knew we had the belief and we knew if we took our opportunities that we could win the game. We never really had the feeling that we were going to lose it. We knew from the start that we had a really good chance of winning it.

“We had belief in each other and belief in ourselves. We’re delighted that we have come away with another trophy.”