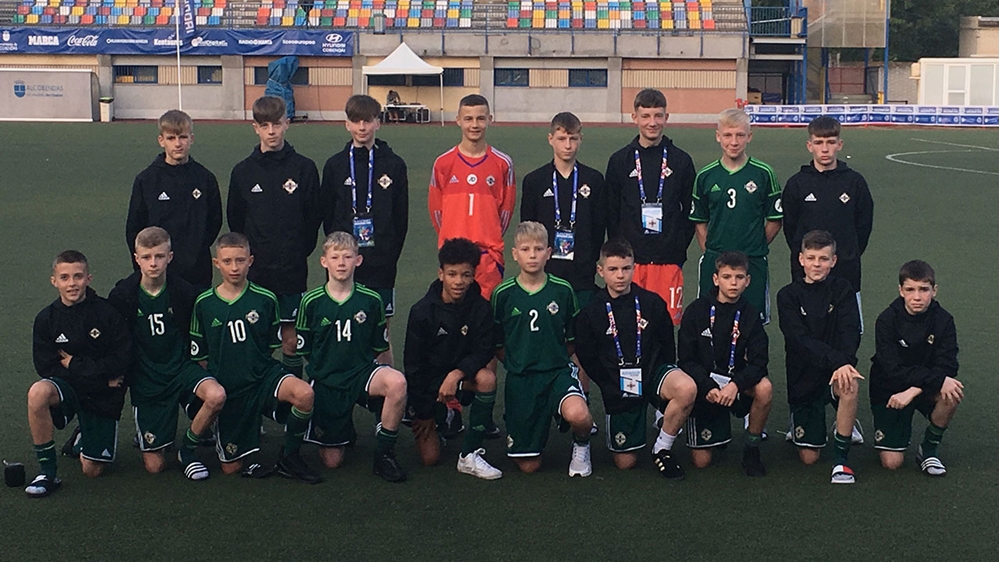 The 32-team annual international tournament, staged at Alcobendas in Madrid, features the youth sides of leading European clubs as well as teams from around the world.

And FC Barcelona’s U14s were among the opponents for the boys from the Irish FA’s elite development programme as they improved on last year’s showing when a Club NI U14 team finished 17th overall.

In the group stages JD Club NI U14s defeated the U14 side from La Liga outfit Getafe 2-0 in their opening fixture. The boys defended well and took their chances when they came, Jay McDowell grabbing both goals.

The second fixture was another tough encounter. The U14s took the lead against Austrians Flyeralarm Admira, with Jay McDowell again on target, however they conceded late in the game, which ended 1-1.

Their final group match saw them take on the eventual tournament winners, Swedish outfit Brommapojkarna. The boys produced a brilliant second half performance. After going 2-0 down they fought back and were in with a shout when Jack Hastings scored, however the Swedes eventually sealed a 3-1 victory.

JD Club NI were in fact the only team in the tournament to score against Brommapojkarna who went on secure the overall trophy, defeating PSG, Bayern Munich and Atletico Madrid (in the final) along the way.

Northern Ireland finished second in the group which earned them a last 16 tie against FC Barcelona.

JD Club NI created two or three good chances early on against the Spanish giants but did not take them. Barca then scored just before half-time and after the break they piled on the pressure to eventually run out 4-0 winners.

In subsequent games to determine their overall position the boys lost 2-0 to the U14s team from Japanese J League side Kawasaki Frontale and then 1-0 to Swiss outfit Lugano. In their final game, however, they defeated Latvians BFC Daugavpils, thanks to a cracking Jack Hastings volley from the edge of the area, to finish 15th overall.

The team’s head coach, Stephen Lynch, said: “It was a quality tournament and one which shall last long in the memory, from getting the opportunity to play the likes of Getafe and Barcelona to being the only side to score against the eventual winners.

“We were slightly disappointed at finishing 15th overall but the boys can be proud of their efforts against some of the biggest clubs in the world. And I would like to give special mention to the fantastic role played by coaches Diarmuid McNeice, Darren Martin and Scott Carse in making it a weekend to remember.”

A super weekend of football for the JD Club NI boys was topped off with a tour of Real Madrid’s Santiago Bernabeu stadium.