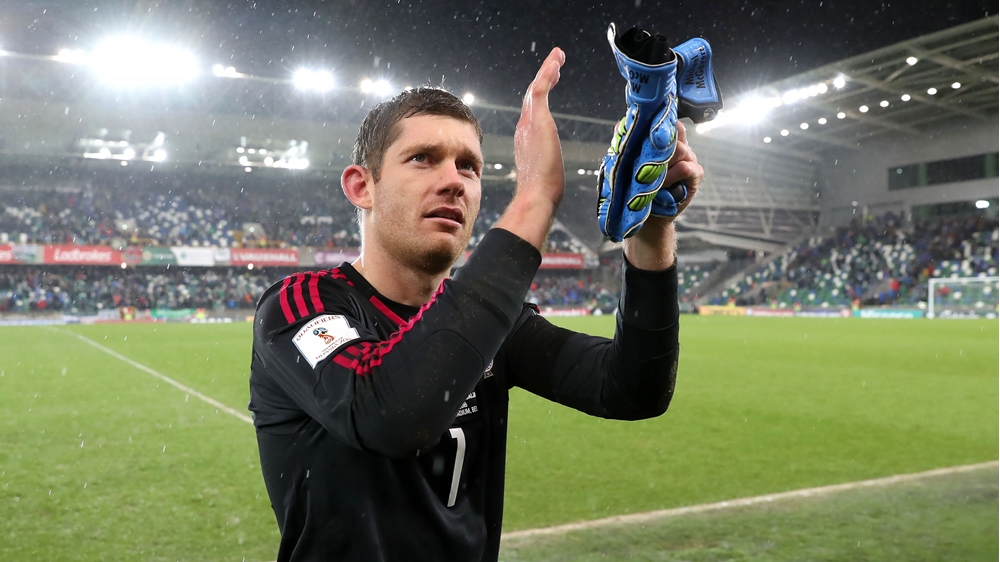 At the age of 35, goalkeeper Michael McGovern came on as a substitute at the weekend to make his Premier League debut for Norwich City in their 2-0 defeat at Crystal Palace.

The Fermanagh-born netminder signed a new two-year deal with the Canaries back in April and he admitted making his top-flight debut at the weekend justified his decision to remain at the club, despite being third choice at Carrow Road this season.

“The chance of the Premier League doesn’t come around very often, especially when you’re 34, so I had to take it,” explained McGovern, who came on to replace the injured Ralf Fahrmann after just 22 minutes on Saturday.

“I work hard every day in training so that I’m ready to take my chances, and that’s happened.

“For myself, personally it’s been good but I don’t want to see it happening with injuries,” he added. “Tim and Ralf are brilliant guys, great goalkeepers and I’m disappointed for them.”

On a more worrying note for Northern Ireland boss Michael O’Neill is the news that City’s talented left-back Jamal Lewis is due to have a scan on his elbow today following the defeat at Crystal Palace.

Norwich boss Daniel Farke said: I’m a bit concerned about Jamal Lewis because he fell on his elbow and that could be a major injury.”

On the goalscoring front, Paddy McNair hit his second of the campaign for Middlesbrough on Saturday, though it was merely a consolation as Jonathan Woodgate’s side slumped to a 4-1 home defeat to Sheffield Wednesday in the Championship.

Elsewhere, 33-year-old Jamie Ward took just 13 minutes to open his account on his debut for Scunthorpe United when he found the net from the penalty spot as the Irons drew 1-1 at home to Bradford City.

In League One, Jordan Thompson hit the winner for Blackpool when he coolly nutmegged an opponent and slotted home for his first goal of the season as they beat Lincoln City 2-1 at Bloomfield Road on Friday evening.

Tangerines manager Simon Grayson would like the former Manchester United and Rangers man to get on the scoresheet on a more regular basis though.

“Jordan will be the first to admit that, in the last few weeks in that final third, he’s been a bit too safe,” said Grayson. “He can make things happen with his own ability.

“I asked him the question before the Lincoln game and he responded with a fantastic goal.”

Meanwhile in Scotland, Northern Ireland under-21 international Cammy Palmer, who is on-loan at Partick Thistle from Rangers, scored his first goal as the struggling Jags recorded a much needed 3-1 victory at Inverness Caledonian.

In the Premiership in Scotland, Liam Donnelly saw red in the dying moments of Motherwell’s single goal success at Tommy Wright’s St Johnstone.

The 23-year-old was dismissed by the referee for an alleged stamp on Saints’ substitute Chris Kane. However Motherwell boss Stephen Robinson insisted that the midfielder had not intentionally stamped on the player.

Said Robinson: “I have seen the red card back and can see why he was sent off, but the momentum has taken Liam over him and I don’t think there is any malice involved in it.”

Also receiving their marching orders over the weekend were  Millwall’s Shane Ferguson and midfielder Matty Lund of Scunthorpe United.

Finally, there were assists for Sunderland’s Conor McLaughlin and Walsall’s on-loan winger and under-21 international Rory Holden.