Review of 2020 (pt 2): A dramatic penalty shoot-out win… and a record for Steven Davis 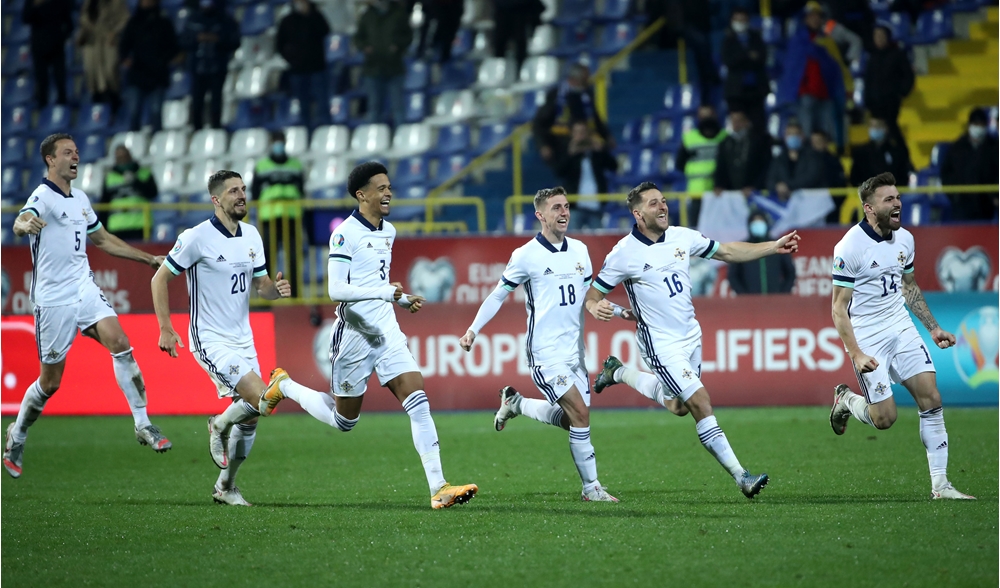 The heavy defeat to Norway in September was not ideal preparation for the Euro 2020 Path B play-off semi-final against Bosnia and Herzegovina in early October. However, it was quickly forgotten as Northern Ireland secured a famous victory in Sarajevo.

Ian Baraclough’s boys triumphed with a 4-3 penalty shoot-out win after the game ended 1-1 after extra time at the Grbavica Stadium.

Liam Boyce, who along with fellow substitute Conor Washington entered the fray with just minutes to go in extra time, scored the all-important spot kick which secured Northern Ireland’s place in the play-off final in Belfast in November. 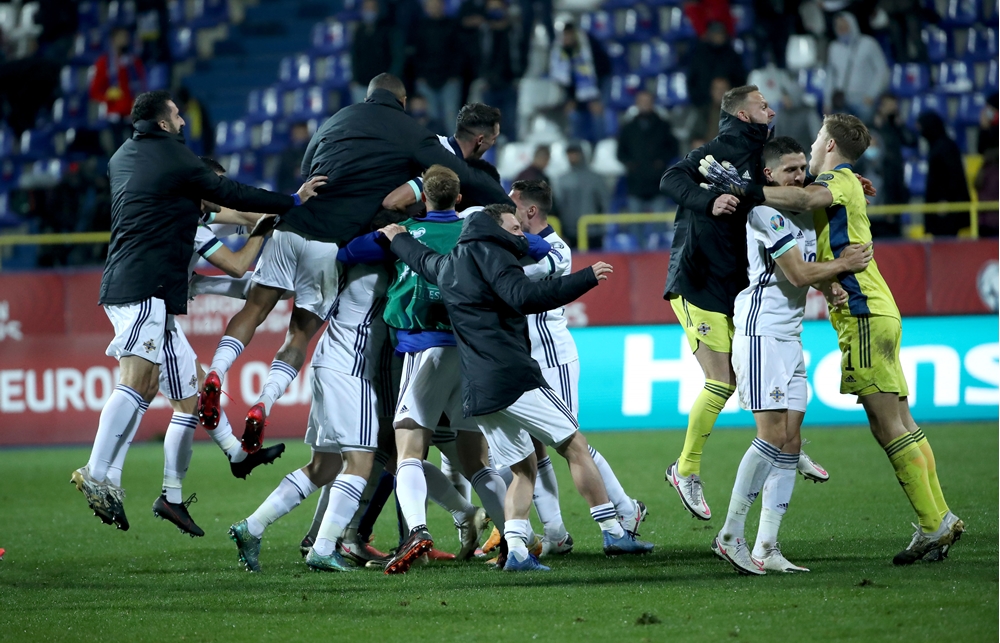 Northern Ireland were very much the underdogs going in to the Sarajevo showdown but they gave as good as they got in a rugged encounter in front of 1800 Bosnian fans at the 13,000-capacity venue.

Steven Davis, as expected, broke legendary goalkeeper Pat Jennings’ caps record for Northern Ireland. And the players he leads ensured he had a night to remember when earning his 120th cap.

Bosnia took the lead on 13 minutes through Rade Krunic and both sides had opportunities before Niall McGinn popped up with the equaliser on 53 minutes. A Jonny Evans free-kick was flicked on by Josh Magennis and McGinn nicked the ball off Branimir Cipetic before it then hit off a Bosnian defender. The ball fell nicely into his path and he coolly tucked it past the keeper. It was a sweet finish.

The game then went to extra time, which failed to produce a goal. So it was on to penalties.

Miralem Pjanic scored the first penalty for Bosnia before Stuart Dallas hammered his spot kick into the back of the net. Then Haris Hajradinovic had his penalty saved by Peacock-Farrell before substitute Kyle Lafferty scored.

Next up was Edin Visca who smashed his spot kick off the top of the bar before George Saville skied his penalty.

Dino Hotic then slotted his penalty home before Washington scored. Legendary Bosnia striker Edin Dzeko made it 3-3 on penalties but Boyce blasted his spot kick past Bosnian keeper Ibrahim Sehic to ensure the shoot-out victory. 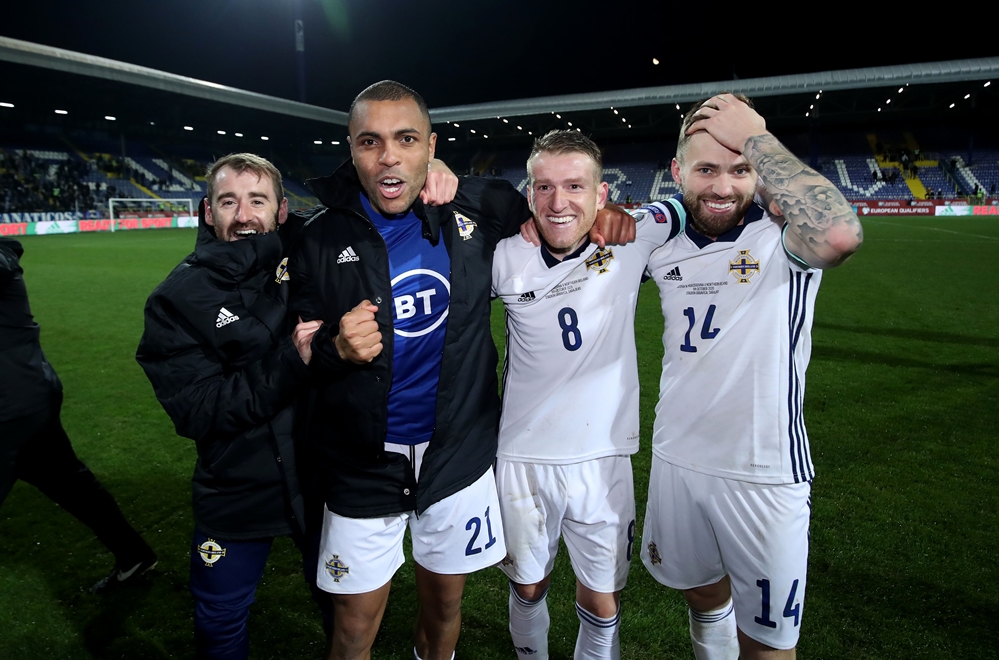 The team were still buzzing when they took the field at home to Austria for a Nations League fixture just a few days later.

Austria dominated the game in the first half and probably did enough in that period to merit a narrow 1-0 victory.

With five changes from the eleven that started against the Bosnians in Sarajevo, the boys in green and white struggled to make an impact in front of 600 members of the Green and White Army, who were allowed in to the National Football Stadium at Windsor Park after Covid restrictions were eased slightly.

Austria took the lead on 42 minutes. David Alaba and Martin Hinteregger exchanged passes down the left and the centre back’s pinpoint cross found Michael Gregoritsch who neatly nodded it past Michael McGovern from six yards as he rose between Jonny Evans and Jamal Lewis.

Northern Ireland created a few decent chances after the break, although the Austrian defence held firm.

Baraclough’s charges were unlucky to lose out to Norway in a UEFA Nations League encounter in Oslo three days later.

An own goal by Stuart Dallas separated the teams in a tight encounter at the Ullevaal Stadium. It was watched by 200 fans at the 27,000-capacity venue.

Baraclough’s side, playing their third match in seven days, produced a solid performance and were unfortunate not to take a share of the spoils.

They had the better of the chances in the first half, although Norway largely bossed the second half.

Baraclough made 10 changes from the side that had lined out against Austria as he went in search of a first win in League B Group 1.

The home side made the breakthrough in the 66th minute thanks to the OG. Martin Odergaard fired in a corner and substitute Dallas was unlucky to inadvertently steer the ball past Northern Ireland stopper Trevor Carson and into the net.

Steven Davis came on to win his 122nd cap after 84 minutes and was quickly on the ball, however Northern Ireland could not force an equaliser in the Norwegian capital. 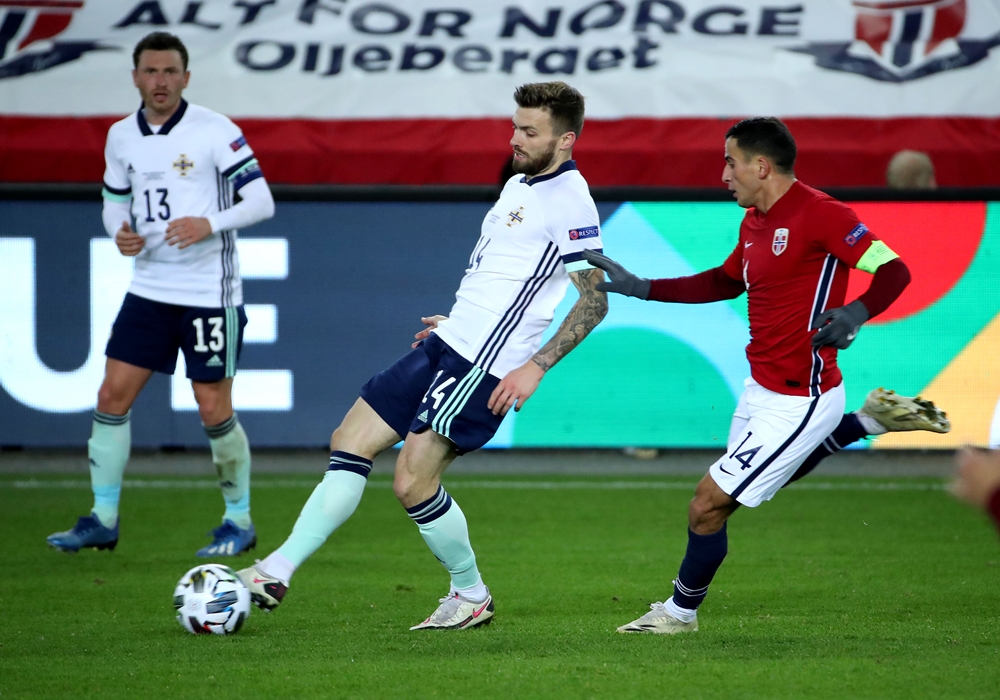