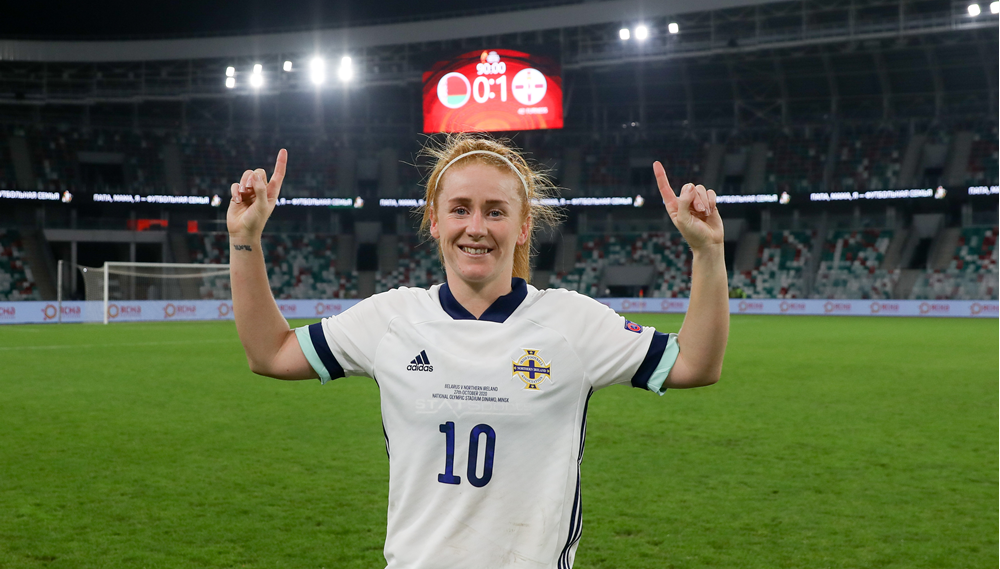 The Northern Ireland senior women’s team had a remarkable year in 2020 as they qualified for a play-off for a major tournament for the first time in the team’s short history.

Kenny Shiels’ side were well placed to make waves in their Women’s Euro qualifying group at the start of the year – and they did that with aplomb.

Shiels introduced a more expansive style of play when he took over as senior women’s manager in May 2019 and it eventually paid dividends.

They entered the new year sitting on two points following two draws against Wales, and two defeats to top seeds Norway, in their opening set of qualifiers last year.

But by the end of 2020 they had secured a further 12 points in Qualifying Group C to keep their Euros dream very much alive.

The away match against Belarus in Group C was scheduled for 14 April with the return fixture in Belfast on 5 June. Northern Ireland were also due to face Faroe Islands at home on 9 June before heading to the Faroes for their final group game on 18 September.

However, the coronavirus pandemic led to the postponement of the spring/summer qualifiers until the autumn.

And in April the UEFA Executive Committee confirmed the UEFA Women’s Euro 2021 final tournament, which had also been postponed, will now be played in England from 6 to 31 July 2022 instead.

Back in March the senior women began their preparations for the qualifiers by competing at the Pinatar Cup in Spain – and the squad’s performances once again showed they are making steady progress.

They lost to Iceland (1-0), Ukraine (4-0) and Scotland (2-1), countries who are all ranked much higher than Northern Ireland, but the manager was happy with the level of performance at the tournament.

Going in to the final four qualifiers of the campaign the girls in green and white knew that four wins would guarantee a play-off, but it appeared to be a tall order.

The 2-2 away draw and 0-0 home draw against Wales in 2019 meant Northern Ireland would have a better head-to-head record - thanks to those away goals - if the two countries were neck and neck going in to the final group fixtures.

Step one for Northern Ireland was the away qualifier against Faroe Islands, which went ahead as scheduled in mid-September.

And the senior women lived up to their favourites tag as they comfortably ran out 6-0 winners in Torshavn.

It was a fourth seeds (NIR) v fifth seeds (FRO) clash in Qualifying Group C. Lauren Wade and Simone Magill both helped themselves to doubles, while Rachel Furness and Kirsty McGuinness also got on the scoresheet.

The senior players, who had followed a strict training regime delivered remotely by Shiels and his staff throughout the Covid-19 pandemic, were well prepared for the game – and they were three up within half an hour as they dominated the game.

Northern Ireland extended their lead on 56 minutes. McCarron floated in a free-kick which was headed on by Furness to Wade and she provided the finish.

Magill grabbed her second of the game, and Northern Ireland’s sixth, on 90 minutes. McCarron delivered the ball towards goal and the striker pounced to head it into the net.

Like McGuinness and Caldwell, Caragh Milligan returned to the fold for the Faroes game after a lengthy sojourn, while fellow substitute Joely Andrews made her senior debut.

The senior women then made it back-to-back wins thanks to a 1-0 victory away to Belarus in October.

Shiels’ side had to play the majority of the match with 10 players after keeper Jackie Burns saw red -  but it was swiftly followed by a moment of magic from Rachel Furness who netted the only goal of the game to claim a precious three points in Minsk.

Furness’s goal – a bullet header – arrived three minutes before the break and could not have come at a better time for Northern Ireland who had to readjust on 27 minutes when Burns received her marching orders for a foul on Anastasija-Grazyna Shcherbachenia.

On came replacement stopper Becky Flaherty with goal threat Kirsty McGuinness making way and it looked like it could have been a long night for the girls in white. But up stepped Furness who rose above the home defence to head home Demi Vance’s pinpoint corner.