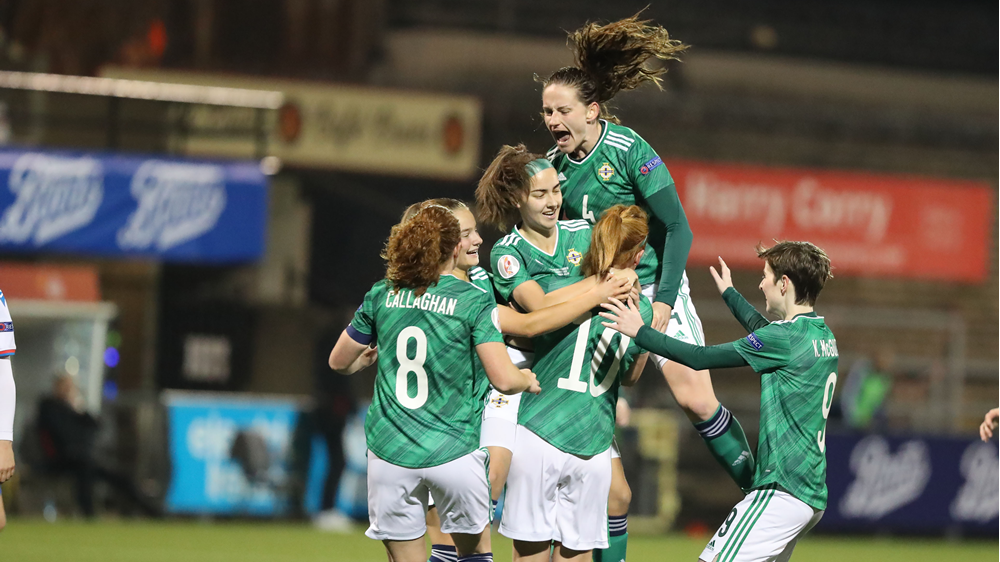 Despite an early setback Kenny Shiels’ side dominated the game at Seaview and ran out comfortable winners on a 5-1 scoreline. Sisters Kirsty and Caitlin McGuinness both got on the scoresheet along with Chloe McCarron, while Rachel Furness grabbed a double.

Lauren Wade had the first effort of the game, but her shot from distance was comfortably gathered by Faroes keeper Oluva Joensen.

The Faroese took the lead on four minutes. Kara Djurhuus played a clever ball to Jensa Torolvsdottir and she applied the finish.

Northern Ireland were level within two minutes. McCarron floated the ball towards goal and it was punched away by the Faroes keeper but Furness was on hand to bravely head the loose ball home.

Minutes later captain Marissa Callaghan’s close range shot from an angle was pushed around the post by Joensen, while Wade had another shot from distance.

Julie Nelson found Kirsty McGuinness with a sweeping long pass and she headed the ball towards strike partner Emily Wilson, however her connection was weak and the Faroes stopper dealt with her effort comfortably.

Northern Ireland took the lead through a sublime Kirsty McGuinness strike on 27 minutes. The striker collected a Wade pass close to the edge of the area before cutting inside and curling the ball superby into the top corner.

Furness directed a header straight at the keeper, while Wade, following a slick move, stepped past her marker and drove the ball straight at Joensen.

As half-time approached Kirsty McGuinness produced a fine delivery from the left which was headed over the top by Furness.

Just after the restart Joensen pulled off a fine save to keep Kirsty McGuinness out. Wade fired in a low cross and the striker met it at close range, however the Faroes keeper managed to push the ball away, and Callaghan sliced the loose ball wide of the target.

Northern Ireland continued to push forward, as they had done for most of the first half.

Their third goal was another peach. On 55 minutes Wade jinked inside down the right and slipped the ball to McCarron just outside the area. The midfielder took a touch and then unleashed an unstoppable strike into the top corner.

History was made when Caitlin McGuinness came on as a substitute in the 64th minute, replacing Wilson. Caitlin and older sibling Kirsty became the first pair of sisters to feature for the Northern Ireland senior women’s team in the same match.

Furness had another header towards goal 10 minutes later before substitute Samantha Kelly unleashed a great effort which the Faroese keeper tipped over the bar.

Northern Ireland got their fourth in the 77th minute. A McCarron delivery from a corner was headed on by Nelson and Caitlin McGuinness nipped in to sweep the ball past Joensen.

Six minutes later the lively Wade had another fine effort from distance which the Faroese keeper tipped over the top.

Goal number five came in the 87th minute. Kirsty McGuinness pinged a corner to the back post where Furness arrived right on cue to clip the ball home from close range off the knee of a Faroes defender for her second of the night. It was her 31st goal for Northern Ireland.

The last action of the game saw Furness fire the ball wide from distance.