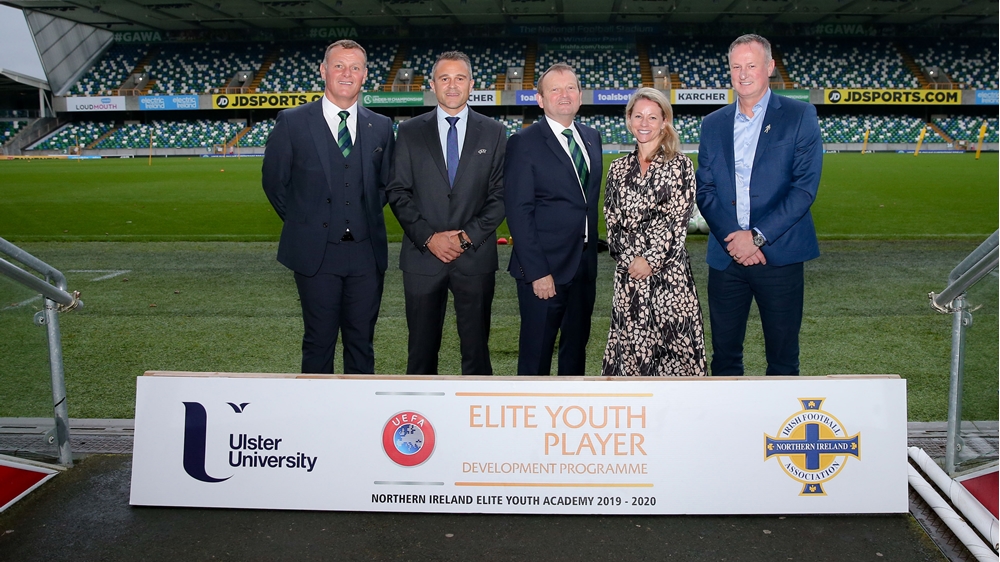 Based at Ulster University’s Jordanstown campus, the academy is fully endorsed by UEFA, European football’s governing body, and operated by the Irish Football Association in conjunction with the university.

Northern Ireland is one of three countries - Finland and Israel are the others - which are being supported by UEFA to implement academies over the next four years (2019-2023).

Ulster University, which is a premiere sporting university, said the creation of the academy reflected its commitment to being a leader in performance sports and developing world class sporting facilities.

The Irish FA-UEFA Elite Youth Academy operates under the directorship of Jim Magilton, the Irish FA’s Elite Performance Director, who insists it will be transformational for the development of elite players at school years 11 and 12 (U15 and U16).

He said the academy will play a crucial role in the preparation of young players for life in professional football. Each school year over the next four years there will be an intake of up to 20 elite footballers from each age group.

Jim Magilton added: “The ultimate aim is to produce players for Northern Ireland’ssenior men’s team. The academy will help to nurture talented players who are well-educated young scholars ready for a life in professional football academies. And we want to ensure these players will be ready for international football and ready to achieve their full potential.”

Olivier Doglia, Senior Football Development Manager at UEFA, will be supporting the Northern Ireland academy over the next four years.

He explained the main objective of the UEFA academy project is to produce better players, compose the right mixture of sporting, school and life skills education, and to ensure quality development and technical programmes.

He said this was in line with UEFA’s mission statement, which puts a clear emphasis on the development of football throughout Europe – including giving constant impetus to the coaching and fostering of young footballers.

Amanda Castray, Director of Campus Life at Ulster University, said: “At Ulster University we are passionate about performance sport and helping young people fulfil their potential. We are delighted to welcome this programme to our Jordanstown campus and the opportunity it brings for young footballers to realise their sporting ambitions while also being supported in their personal and educational development.

“The university has recently completed research studies on the promotion of children’s rights in football with UNICEF UK and on dual careers with UEFA which highlighted the importance of supporting elite young players holistically.

“It is with that in mind that we congratulate the Irish FA and UEFA for developing a programme that provides a high performance environment for young players to become a professional, prepares them for alternative careers, and promotes and protects their rights.”

UEFA will work closely with the Irish FA in accordance with a detailed plan. Its experts will regularly visit the academy in Jordanstown, tackling topics ranging from medical and technical issues to nutrition, scouting, schooling and training.

Northern Ireland, Finland and Israel were selected for support by UEFA on the basis of various criteria. It noted all three associations had good infrastructures already in place and support was forthcoming from the associations’ senior management.