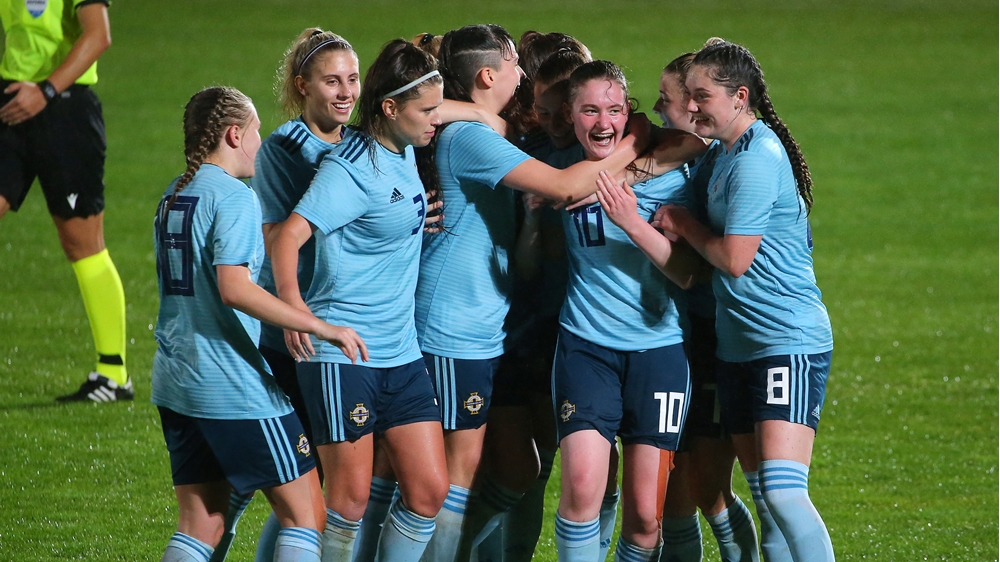 Northern Ireland Women’s U19s have progressed to the elite round of 2020 UEFA European Women’s Under-19 Championship qualifiers after an excellent win against Moldova.

Northern Ireland is currently hosting a four-team mini tournament which is a qualifying round for the 2020 UEFA European Women’s Under-19 Championship.

And the win against Moldova at The Showgrounds in Ballymena was a second victory in two games for Northern Ireland’s WU19s, which is enough to book a place in the elite round next spring. They face Norway in their final game in the UEFA tournament.

Following their 1-0 win over Wales in their opening game in Qualifying Group 5 Alfie Wylie’s side quickly settled into their rhythm against the Moldovans.

Jessica Rea, Casey Howe and Beth Smyth all had decent efforts on goal before Alexandra Collighan opened the scoring in Ballymena in the 24th minute. And they were two up just five minutes later when Caitlin McGuinness slotted home after getting on the end of a Howe cross.

Rebecca McKenna then shot wide of the target before a Toni-Leigh Finnegan strike from a free-kick was blocked by Moldovan keeper Bianca Druta, who moments later saved a Smyth effort.

Northern Ireland continued to push forward in the early stages of the second half and Druta pulled off a good stop from a well-struck Smyth shot before Finnegan swept an effort wide.

On 58 minutes Finnegan and Smyth combined as Smyth made it 3-0 to Northern Ireland with a neat finish.

Finnegan, Smyth and Collighan all had efforts before McKenna popped up to grab the fourth goal of the game, steering a Howe pass into the net.

It was 5-0 by the 78th minute. This time Finnegan’s cross was met by captain Kelsie Burrows and she made no mistake.

The chances continued to come thick and fast for Wylie’s side. Howe, Joely Andrews, Rea and Mia Fitzsimmons all had efforts blocked before Finnegan got on the scoresheet right at the death. Deep into stoppage time Howe whipped in a corner and Finnegan fired it past the overworked Druta to leave the final scoreline at 6-0 to Northern Ireland.

The next assignment for Wylie’s side will be a lot more challenging. They face Norway, who top the group on goal difference after hammering Moldova 8-0 and the Welsh 11-0.

That game is tomorrow (8 October) at Seaview, with a 2pm start, while Wales and Moldova will battle it out at nearby Solitude in Belfast (also at 2pm).

The top two sides in 12 groups plus the four third-placed teams with the best record against the top two in their section will go into the elite round draw on 21 November, with the elite round games in spring 2020. Seven teams will eventually join hosts Georgia in the finals in July 2020.