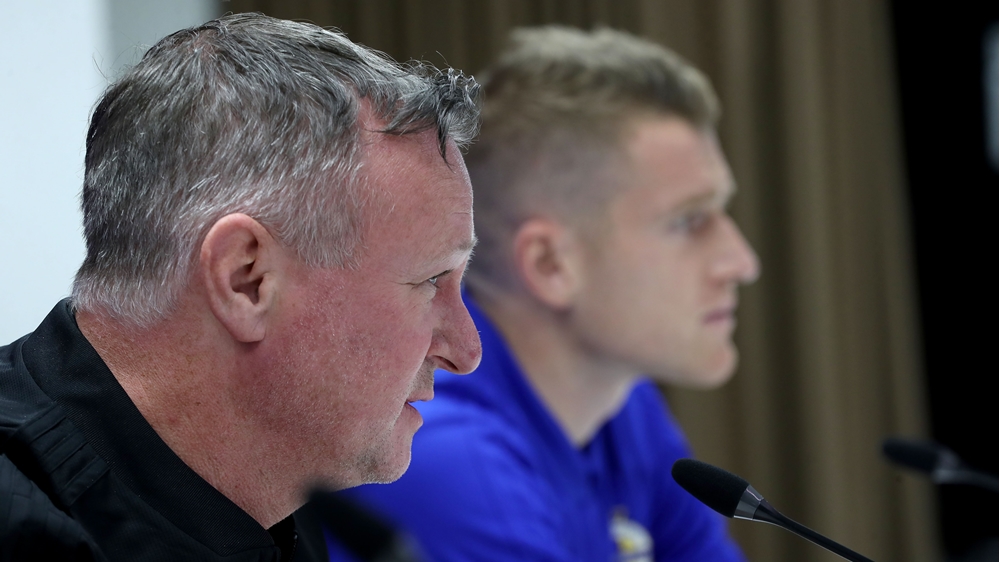 Northern Ireland boss Michael O’Neill insists his players have belief ahead of tonight’s Euro 2020 qualifier against Netherlands in Rotterdam.

Ronald Koeman’s in-form Dutch side are favourites to win the match at the Feyenoord Stadium (7.45 kick-off) but O’Neill says his players are up for the challenge.

“If we can reach the levels we produced against Germany then we will give ourselves a fighting chance,” he said.

O’Neill was naturally disappointed with the 2-0 defeat to the Germans in Belfast last month which saw Joachim Low’s team leapfrog the boys in green and white to top Qualifying Group C.

And he is acutely aware that setback against Germany now means his team go in to the two qualifiers against Netherlands, tonight at De Kuip (aka The Tub/Bucket) and next month in Belfast, needing to extract four points.

“Can it be done? Well, myself and the players believe it is possible, starting with the game in Rotterdam,” he said.

The Northern Ireland manager acknowledges the Dutch will have the bulk of possession at the home of Feyenoord tonight but he feels his charges can create chances against a team featuring some of the most talented players on the planet.

O’Neill added: “Of course it’s going to be a huge, huge challenge, as the Dutch team is packed with players who ply their trade at the top of the pyramid in European club football.

“But I believe we have the players at our disposal who can rise to the occasion in Rotterdam and do themselves and our country proud.”

Much of the pre-match talk in the European media has been about the qualities of the Dutch centre-back pairing of Virgil Van Dijk and Matthijs de Ligt and how Northern Ireland will find it extremely difficult to get past them.

However, the Dutch media are focusing on who Koeman will deploy in midfield, either Marten de Roon or the more creative Donny van de Beek, while up front he is being urged to shift the lively Memphis Depay out to the wing so that in-form PSV Eindhoven striker Donyell Malen can keep Jonny Evans and Craig Cathcart busy.

And there’s no doubt Koeman, who has been extremely complimentary this week about the qualities of Northern Ireland captain Steven Davis, whom he managed at Southampton, is on his guard ahead of the match.

He said: “In terms of footballing ability and quality, we are better than Northern Ireland, however that doesn't mean to say it's going to be an easy match. The battling mentality and aggressiveness that they manage to produce is incredible. For an hour in the match against Germany they had the better chances."

Michael O’Neill will, as ever, have meticulously prepared a game plan – and will be hoping to exploit chinks in the heavy Dutch armour.