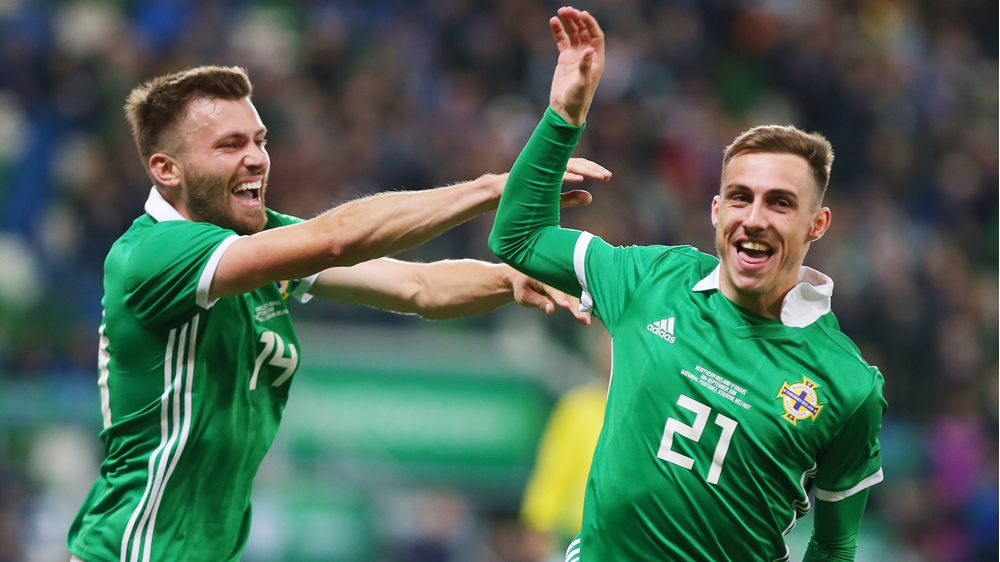 Northern Ireland midfielders Gavin Whyte and Stuart Dallas are anticipating two tough games as they gear up to face Estonia and Belarus in a UEFA Euro 2020 qualifying double-header.

The pair, who have followed similar paths from Danske Bank Premiership side Crusaders to football in England and on the international stage, are under no illusions that the upcoming away games in Tallinn and Borisov will be difficult to navigate.

Dallas spoke to irishfa.com about the challenges of Estonia (Saturday June 8) and Belarus (Tuesday June 11) and was also full of praise for team-mate Whyte’s performances in his first full season in the professional game.

“I think the games are going to be difficult, as double-headers always are, especially away from home and at this time of the season but we’ve prepared well. We’ve had a good couple of training camps in Manchester and then Austria and we’re looking forward now to Saturday’s game,” Dallas said.

“Gavin has done really, really well and it’s all credit to him. He’s worked hard and he’s hit the ground running in the professional game. I do look out for him to see how he has got on in games and check whether he’s scored. He’s done really well and he deserves to be where he’s at but he can definitely still continue to grow as a player. I think he’s got a big future in the game."

Whyte, 23, who burst on to the international scene when he scored with his first touch in September’s friendly at home to Israel, says his learned a lot from Leeds United star Dallas.

“Stuart has obviously came on the same pathway as me. He played for Crusaders and got his move to England so he’s someone that I try to take things from and he’s done brilliantly. I have to learn from all of these players, the likes of Steven Davis and Jonny Evans,” he said.

With Northern Ireland topping Group C, the Oxford United man says the international squad has been very well prepared by manager Michael O’Neill as they aim secure another six points in the campaign.

“Training in Austria was tough to be fair. It was hard in that heat especially but we’ve had a good few days under the belt and it gets us ready for two big games now and it’s something we’re looking forward to,” he added.