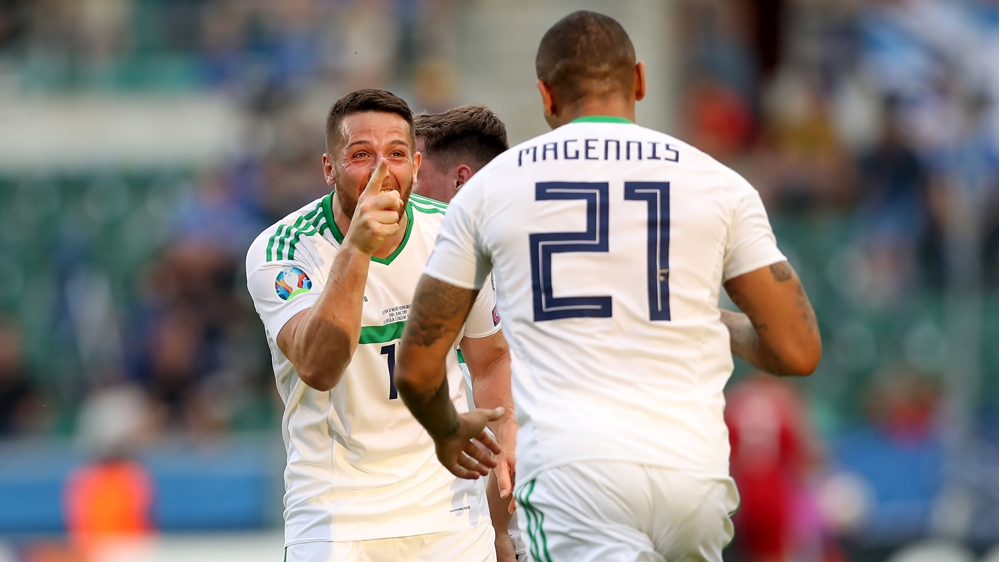 Two goals in the final quarter of the game saw Northern Ireland collect all three points against Estonia in Tallinn this evening.

Michael O’Neill’s side were a goal down with 15 minutes remaining but strikes from super subs Conor Washington and Josh Magennis were enough to seal a 2-1 victory and register three wins out of three matches in Group C of the Euro 2020 qualifiers.

On the balance of play Northern Ireland deserved the narrow win. They had the bulk of the possession across the 90 minutes and in the second half in particular they played with greater intensity than the hosts and launched several attacks.

However, Estonia will no doubt feel a little aggrieved at the result. They scored the first goal of the game, had an effort disallowed, hit the bar and were denied an equaliser thanks to a wonder save from Bailey Peacock-Farrell.

Northern Ireland were on top in the opening 20 minutes at the A Le Coq Arena, however apart from a couple of marauding runs from Jamal Lewis there was little to get the 1200 travelling fans on the edge of their seats.

And then, against the run of play, Estonia took the lead on 24 minutes. Stuart Dallas committed a foul just outside the box and Estonia captain Vassiljev curled the resulting free-kick around the wall from 22 yards into the bottom corner.

Northern Ireland then pressed again and on 29 minutes Craig Cathcart got on the end of a Paddy McNair corner but guided his header over the top.

Estonia had the ball in the net again 10 minutes later but it did not count. There was an infringement on Peacock-Farrell as the ball was headed into the net from a corner kick.

Moments later Dallas, after a penetrating run, fed the ball to Gavin Whyte down the right but his cross was headed well wide by Liam Boyce.

In the 42ndminute Dallas turned his marker on the edge of the box but fired his shot over the bar before Sergei Zenjov steered the ball wide of the post for the Estonians when well placed inside the visitors’ area.

Northern Ireland upped the tempo after the break in the sweltering conditions. Dallas immediately got in behind the Estonia defence on 47 minutes but produced a weak cross.

In the 52nd minute Estonia almost doubled their lead, Vassiljev smashing a long range shot against the bar.

Three minutes later Conor Washington, who had come on for Liam Boyce at the start of the second half, played in George Saville, however Estonia goalkeeper Lepmets managed to push his effort over the bar.

On 57 minutes Jonny Evans guided a McNair delivery from a corner over the top and then Saville’s close range header was comfortably collected by Lepmets.

In the 66thminute Peacock-Farrell made a decent stop from Sinyavskiy’s low drive and down the other end substitute Jordan Jones screwed a cross wide after drifting past a couple of markers.

In the 76th minute the equaliser came. Lewis slid in Washington and he skipped past a couple of markers before firing the ball home. His shot touched Magennis on the way in, however the goal was officially given to Washington by UEFA.

Two minutes later Northern Ireland took the lead. The lively Jones raced down the left and his low cross found fellow substitute Magennis who neatly steered the ball past Lepmets from six yards.

On 80 minutes Peacock-Farrell produced an outstanding save to keep it at 2-1. Dmitrijev launched a piledriver from 22 yards and the keeper palmed it around the post.

Estonia had a chance to equalise right at the death, however Dmitrijev steered a header wide of the upright and then Jones drilled an effort wide for Northern Ireland at the other end.