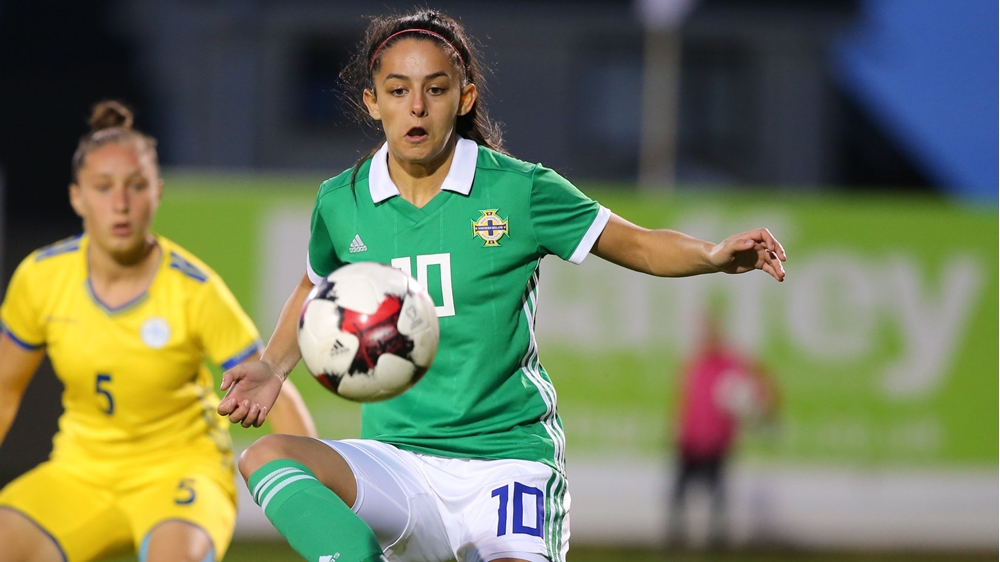 Northern Ireland Women’s U19s produced another encouraging display despite losing to Denmark in their latest Euros elite round qualifier.

Following their 2-1 loss to hosts Norway in their opening fixture in a four-team 2019 WU19 Euros elite round mini tournament, Northern Ireland took on the Danes in game two and were defeated 3-1.

However, Alfie Wylie’s side produced some good football at the AKA Arena in Honefoss against a talented Danish outfit.

Norway and Denmark, who have both won their opening two games, will now battle it out to see who progresses from the group to this summer’s finals, while Northern Ireland will face Ukraine in their final game.

The Danes, who hammered Ukraine 6-0 in their first game, were immediately on the front foot against Northern Ireland in Honefoss with midfielder Janni Thomsen smashing a shot against the woodwork in the fifth minute.

And they took the lead on nine minutes when striker Dajan Hashemi forced the ball over the line during a goalmouth scramble following a corner.

Northern Ireland keeper Lauren Perry had to be on her toes to keep out a Sofie Svava effort on 20 minutes.

In the 24th minute Wylie’s side almost levelled things up. Rebecca McKenna produced a good delivery from a corner which Leyla McFarland headed inches wide of the post.

Denmark midfielder Olivia Moller Holdt then had a couple of chances before Megan Bell had a shot saved by Danish keeper Lene Christensen and on the stroke of half-time midfielder Svava’s drive was just off target.

Just after the re-start Perry made a fine stop from an Emma Snerle shot and she kept out Snerle again on 64 minutes.

Two minutes later, however, the Danes extended their lead. Snerle produced a lovely defence-splitting pass which fellow midfielder Josefine Hasbo latched on to before slotting the ball past the advancing Perry

Northern Ireland reduced the deficit in the 73rd minute. McKenna was fouled by Svava and Bell took the free-kick. The captain’s effort was cleared as far as Louise McDaniel on the edge of the area and she hammered the ball home.

The Danes then pushed forward again and grabbed a third goal when Thomsen sped down the right wing and fed substitute Vilja Dahl Pedersen and she whipped the ball past Perry to make it 3-1.

The final game for Wylie’s side in the elite round is against Ukraine tomorrow (9 April) at the AKA Arena, while the Danes and Norwegians, who defeated Ukraine 7-1 in their second game, will be facing each other in Jessheim. Both games start at 1600 local time.