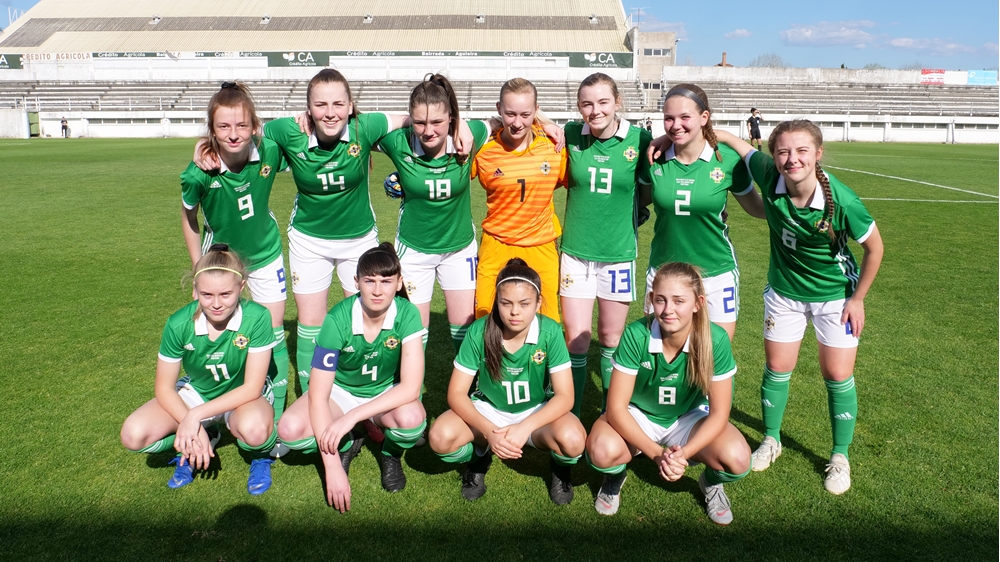 Northern Ireland’s Under-17 women’s team were unlucky not to register at least a point in their final WU17 Euros elite round qualifier.

After suffering heavy defeats against France and Portugal in a four-team elite round mini tournament staged in Portugal, Alison Nicholl’s side battled it out with Czech Republic for third/fourth place in the group.

Northern Ireland’s WU17s played some slick attacking football and created plenty of chances against the Czechs, who had also been beaten by the French and the Portuguese in the group, however they could only find the net once and lost the game 2-1.

For the match at the Dr Americo Couto stadium in Mealhada the Northern Ireland manager made three changes from the team that lost 6-0 to Portugal in the previous game.

The first chance of the match fell to Northern Ireland midfielder Danielle Maxwell but her effort was off target, and then striker Joely Andrews had a couple of shots blocked in quick succession.

On 30 minutes WU17s keeper Jenna Corry pulled off a good stop from a Katerina Furikova shot before Andrews had another shot saved by Czech keeper Bara Berankova.

The Czech Republic took the lead in the 32nd minute when Jana Zufankova played in Jennifer Hilbertova and she slotted the ball past Corry.

On 37 minutes Caitlin McGuinness had a good opportunity to level proceedings but screwed her shot wide, and minutes later she had another effort saved by the Czech keeper.

McGuinness, however, did get on the scoresheet just after the break when she pounced to drill the ball past Berankova.

The Czechs pushed forward and Anna Subrtova had a shot blocked before they took the lead again on 65 minutes. Furikova fired in a free-kick which was swept home by Andrea Hola to make it 2-1 to the Czechs.

In the closing stages substitute Kim Dinh Thanhova and Furikova both missed good chances for the Czechs, while Northern Ireland striker Casey Howe drilled a shot wide of the upright and McGuinness had a shot smothered by the Czech keeper.