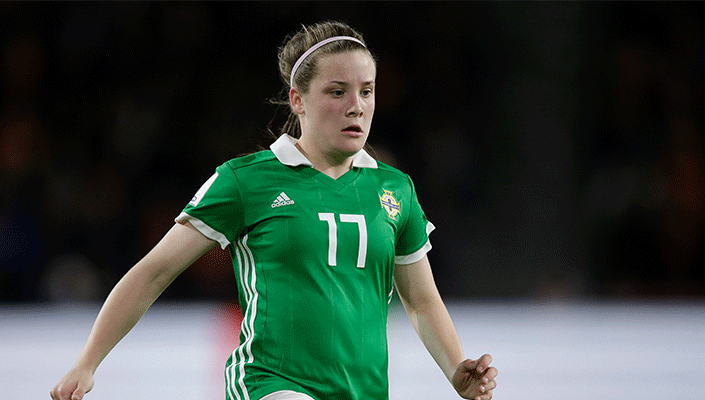 Northern Ireland Women Under 19s finished off their Home International Development Tournament with a 100% record after a penalty shootout win against England.

Unlike the previous encounter against the Republic of Ireland, it was Northern Ireland who scored a late equaliser through Megan Bell before Beth Hopwood became the hero with the penalty save to give them victory.

Coaches Alfie Wylie and Noel Mitchell put out the same eleven which beat the Republic of Ireland two days previously and it took some good England defending to stop Northern Ireland taking an early lead with chances for Louise McDaniel and Emily Wilson.

McDanel was forced off through injury and moments later England were awarded a penalty which they converted to give them the lead.

The second half started with England on top and with ten minutes to go, both sides were creating chances as Northern Ireland looked for the equaliser.

With two minutes gone in added time, Toni Leigh Finnegan struck a free kick deep into the box and Wilson flicked her header onto Bell who drove the ball into the net for the equaliser and to send the game to penalties.

Goalkeeper Lauren Perry had been early replaced in the game by Hopwood who saved England's first penalty with Northern Ireland scoring all four in a row through Bell, Caitlyn Hamilton, Wilson and Lauren Robson.

Hopwood then saved England's next penalty meaning the Under 19's claimed another 4-3 penalty win to give them two wins in two at the tournament.

The Women's Under 19s now face Hungary on 20 & 22 August in Northern Ireland before also hosting their Euro qualifying group consisting of Estonia, Kosovo and Germany between the 2-8 October.