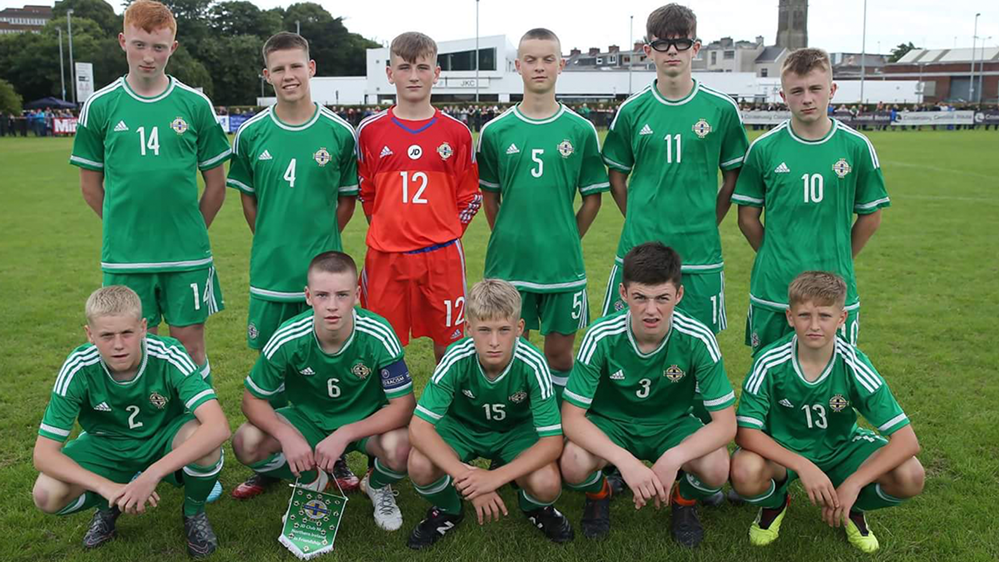 County Londonderry suffered a 2-0 defeat at the hands of a committed Club NI side at a packed Anderson Park on Tuesday evening.

Derry went into the tie buoyed by a fine 2-1 win over Manchester United on the opening night but they were out-fought and out-worked by Club NI.

Goals from Callum Marshall and the influential Charlie Lindsay helped Club NI claim top spot going into the final round of group games.

The opening exchanges were nervy with both sides struggling to get into any sort of rhythm.

However, the game sprung in to life with 22 minutes on the clock. Matthew Carson whipped a fine ball to the back post, which was met by Josh Roney. Roney nodded back across the area and Callum Marshall acrobatically poked the ball home.

Just four minutes later it was 2-0. A Club NI corner kick caused mayhem in the Londonderry box and the referee spotted an infringement.

Charlie Lindsay stepped up and calmly side footed home.

Manchester United giant killer Lee Harkin almost gave Derry a major lifeline as he bamboozled several Club NI defenders and his audacious effort from wide on the right clipped off the post and was scrambled clear.

The half time whistle came at the wrong time for Derry, but Marty Smith’s side continued to threaten in the early phases of the second half.

Harkin again wriggled past several markers down the left and he laid the ball off to Liam Quigley, who struck his effort well but it was always rising above Billy McDowell’s goal.

The diminutive Harkin almost caught McDowell out from distance with a now trademark lob, but it drifted wide of the post.

That was Harkin’s final contribution as he was injured in an innocuous challenge.

Derry pushed forward at will but strong defending from Club NI and inspirational goalkeeping from McDowell saw Club NI stand strong and claim their first win of the group and assert their influence at the top of Group A.

Club NI now move on to an intriguing clash with Manchester United at Seahaven on Wednesday, while Londonderry will entertain Rangers at the Coleraine Showgrounds.