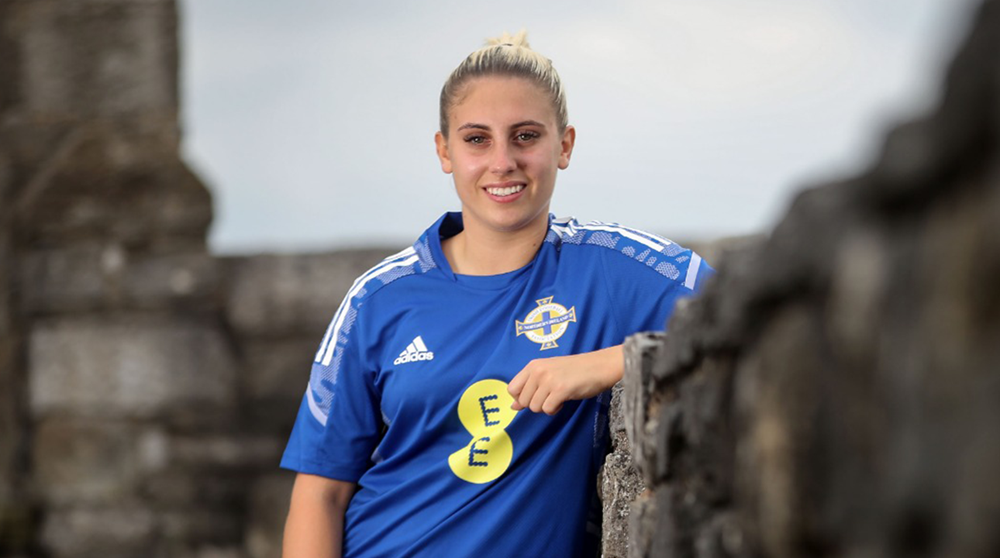 Kelsie Burrows says the excitement is building in the Northern Ireland camp ahead of the senior women’s team’s first game in their first major tournament.

Kenny Shiels’ side face Norway tomorrow in UEFA Women’s Euro 2022 and the Cliftonville Ladies defender is looking forward to the historic encounter at the St Mary’s Stadium in Southampton.

“Everyone is so excited and can’t wait to get started at the tournament. We are a big family and everyone has each other’s backs no matter what’s going to happen or what’s going on,” she said.

They may be family, however the young defender revealed all 23 members of the squad are vying for a place in the starting line-up. “Each one of us wants to get on that pitch to represent our country. There’s definitely healthy competition, and that’s what you need in a team,” she said.

She pointed out the “brilliant” team hotel, located next to a marina, is a calming place with good facilities, while she also gave a thumbs up to Northern Ireland’s training complex and media centre on the outskirts of Southampton.

Although she enjoyed Monday’s send-off, including an official team photoshoot where the players wore sharp new Marks and Spencer suits, she revealed the 23 squad members could not wait to get out on the training pitch.

Looking forward to the first game, the defender said the players know that Norway are a good team, having played and lost against them twice in the early stages of the qualifiers for this summer’s tournament.

But she added: “If we set up right and get on the ball then I don’t think they will be able to handle us.”