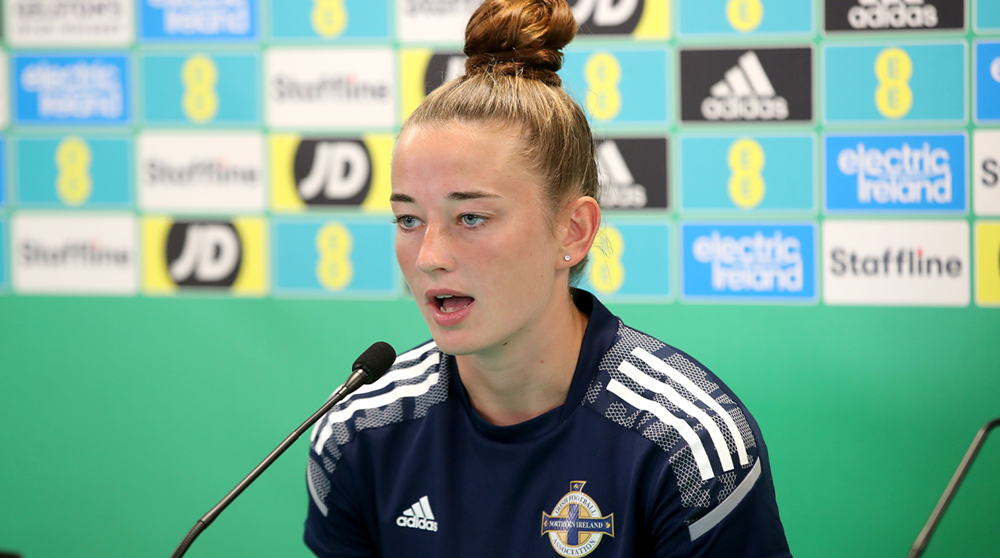 Northern Ireland defender Rebecca McKenna has revealed the squad are feeling deflated after losing out to Austria at UEFA Women’s Euro 2022 yesterday.

She said the players are particularly disappointed because they felt they could get a result against the Austrians in their second Group A fixture at the tournament.

Goals from Katharina Schiechtl on 19 minutes and substitute Katharina Naschenweng with two minutes of regulation time left on the clock helped Austria register a narrow 2-0 win in sweltering conditions in Southampton.

“This group is like a family. We will come together again and learn from the experience. We gave everything we could and that’s all you can ask for,” said McKenna.

Our fans are different class 🙌 @RebeccaMcKenn20 loves the #GAWA 💚 pic.twitter.com/IEWCnxZf3P

The result means Northern Ireland cannot progress to the final stages of the Euros and will be heading home after Friday’s group game against high flying England at St Mary’s Stadium in Southampton.

The right back made her first start of the tournament in the match. She pointed out: “It’s always a proud moment playing for your country but to do it at such a big occasion was obviously special. Of course it would have been better had we got a result, but we are looking forward to Friday’s game.”

She also told a press conference at Northern Ireland’s media and training centre just outside Southampton that the players know it’s going to be difficult against England, who were imperious against the Norwegians.

McKenna said Sarina Wiegman’s Lionesses had shown their quality against Norway and why they are favourites to win the Euros on home soil.

The defender revealed the players will study footage of recent England performances and pinpoint any weaknesses that could be exploited.

She also said the Northern Ireland fans had been “brilliant” at the two games to date and she expects the Green and White Army to get fully behind the team once more at a sold-out St Mary’s this weekend even though they will be outnumbered by England fans.

And she promised the GAWA that the team will battle hard on Friday. “We will come together as a group and we will give it everything from the first minute to the last,” she stressed.