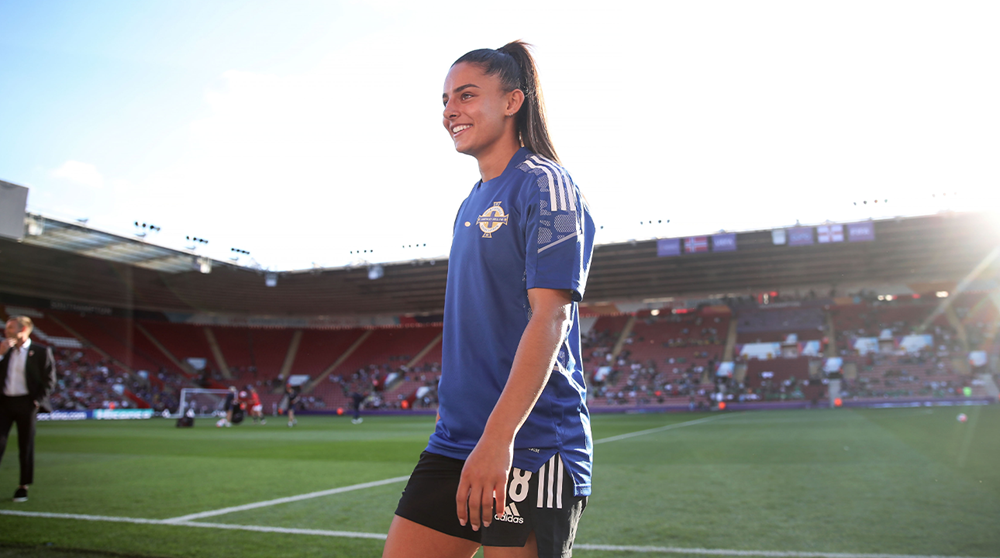 The Women’s Euros experience has sparked a determination in Northern Ireland midfielder Louise McDaniel to forge a full-time career in football.

Although she had brief spells in England and Scotland as a part-time professional with Blackburn Rovers Ladies and Hearts Women respectively, being part of the six-month full-time Northern Ireland training camp in the run-up to this month’s tournament has provided renewed focus for career progression.

The 22-year-old from Belfast, who has won eight caps for her country to date, scoring once, has taken a career break from her job at a bank to be part of it all.

She revealed: “It was a dream come true for me to be able to train full time and to concentrate on football, which I am passionate about. It took a while to get used to it, but since then I feel I have just grown and got better as a player. I have learnt a lot from both Kenny and Dean (Shiels). 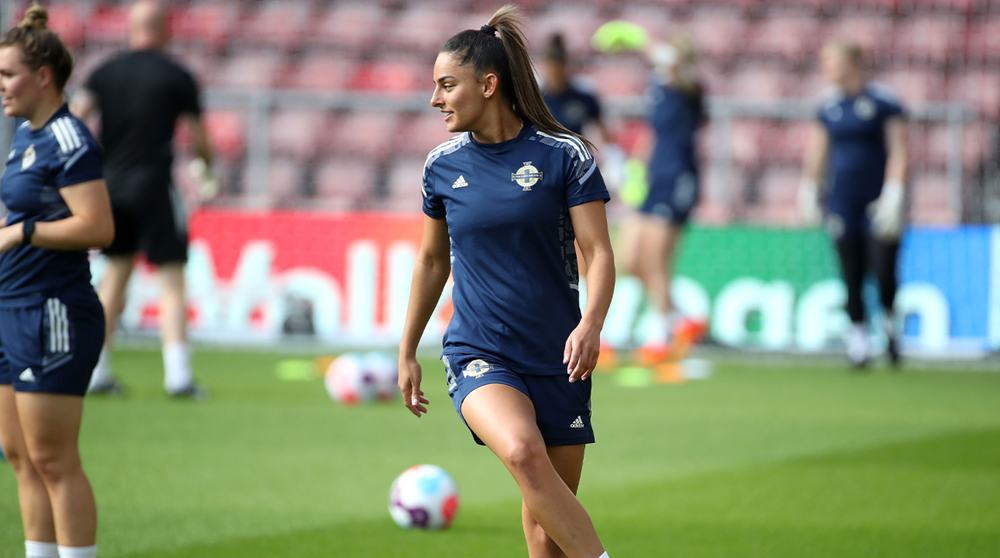 “I loved training every day, and now that it is coming to an end I have realised that’s what I want to do going forward. I would love to be training and playing full-time.”

The Cliftonville Ladies midfielder, who first played football with Twinbrook-based boys’ team Glendowan before switching to Linfield Ladies in her mid-teens, is enjoying the big tournament experience with Northern Ireland.

“It’s still a bit surreal at the moment but I have enjoyed every minute of it so far and I am excited, obviously, as it goes on to experience more,” she said.

Naturally, she would love to get minutes on the pitch during UEFA Women’s Euro 2022, starting with Monday’s game against Austria and then the encounter with hosts England next Friday.

“It would be fantastic to get on the pitch in a major tournament, so hopefully I can get some minutes under my belt going forward,” she admitted.

Although it was not on the scale of a Women’s Euros, McDaniel has represented Northern Ireland at a big tournament before.

In fact Louise made history in 2017 by becoming the first Northern Ireland women’s player to score at a UEFA tournament. Her goal came in a 1-1 draw with Scotland during the Women’s U19 Euros hosted in Northern Ireland by the Irish Football Association.

Reflecting on the senior team’s maiden performance at a Euros, she said her team-mates performed well against Norway in Thursday’s Group A clash and “they should be really proud of themselves”.

And the midfielder is confident the team can get a positive result against the Austrians.

She admitted the team looked nervous against the Norwegians in the opening half hour, but she firmly believes nerves will not be a factor against Austria.

“I think we owe them one after playing them quite recently (3-1 defeat in Women’s World Cup qualifier back in April) and I think everyone is really looking forward to it and we are going into it with the belief that we can get a win.”

McDaniel further revealed the squad are “heartbroken” for striker Simone Magill, who is out of the tournament with a serious knee injury picked up in the game at St Mary’s Stadium in Southampton.

“Naturally, we are all going to stand by her and we are going to be there for her and support her,” she said.