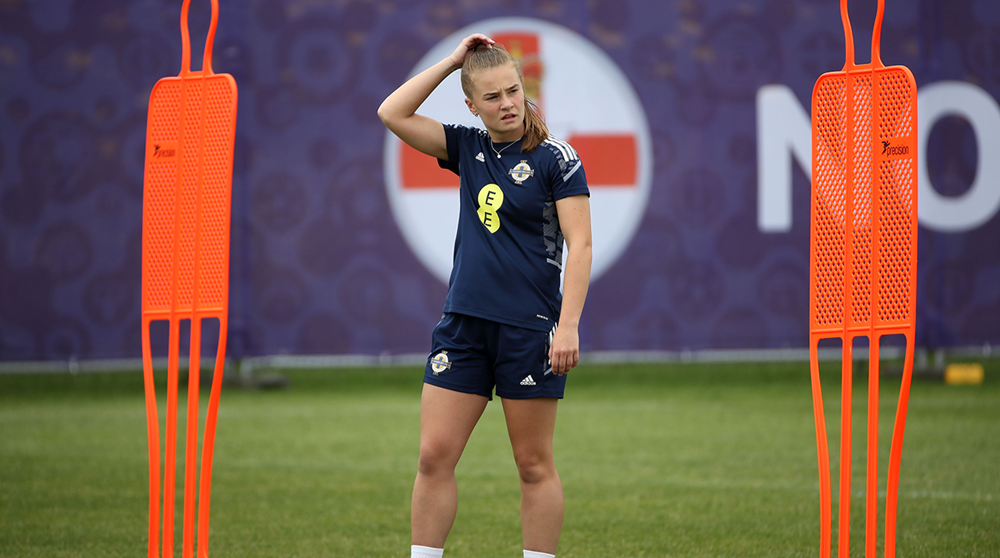 The Director of Women’s Football at the Irish Football Association and the Head of Sports Services at Ulster University have been singing the praises of the academy which has provided players for Northern Ireland’s UEFA Women’s Euro 2022 squad.

Angela Platt from the association and UU’s Nigel Dobson said the Irish FA/UU Girls’ and Women’s Performance Academy was now integral to bridging the gap between youth and senior international levels.

All four took time out from the university to be part of the 22-strong squad which trained full-time in Belfast for six months in the run-up to this month’s Euros.

And Chloe McCarron, also part of the Euros squad, is a graduate of the programme, too, along with internationals Sam Kelly, Rachel McLaren and Maddy Harvey-Clifford, who just missed out on being selected among the 23 players who are representing Northern Ireland at the tournament in England.

UU’s Nigel Dobson said: “We are absolutely delighted and proud to support our students, graduates and staff member Julie Nelson as part of the squad that is representing Northern Ireland in the Euros this summer.

“They are all an inspiration to a whole new generation of players and each of them has played a very significant part in raising the profile, visibility and standard of women’s football at Ulster University under the guidance of Danielle McDowell (Irish FA’s Women’s Football Development Officer).”

He also said he hoped the tournament would be an unforgettable experience for the players.

The Irish FA partnered with Ulster University in 2016 to develop the performance academy, which gives players an opportunity to simultaneously combine training and education.

Funding and scholarships for the academy are provided by both the university and the association.

Utilising Ulster University's world class training facilities and education, players at the academy are supported both on and off the pitch with coaching, strength and conditioning, mentoring and scholarship opportunities.

Angela Platt, Director of Women’s Football at the Irish FA, said: “The Irish FA/UU Girls’ and Women’s Performance Academy has developed significantly over the past few years.

“The academy has an important role within the Irish FA girls’ and women’s performance pathway, supporting talented players to develop their football alongside their education. The partnership is underpinned by our shared aims of developing performance sport opportunities and helping young, talented people fulfil their potential.

“The success of the partnership is evidenced by the number of graduates and current students from the academy progressing to the senior women’s international squad. They are great role models and are inspiring a new generation of young girls to get involved in football. We look forward to continuing our partnership with Ulster University in future years to build on the success to date and expand the academy further.”