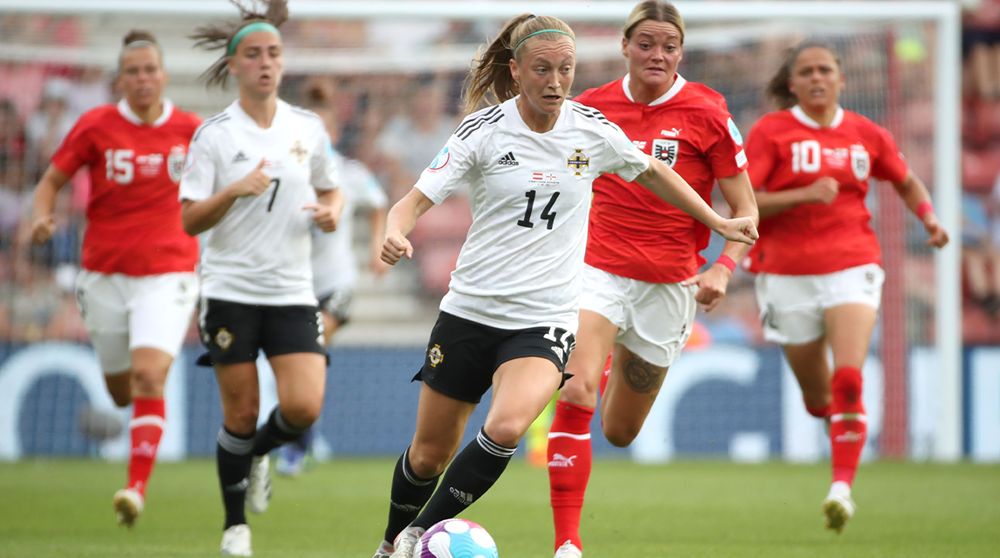 Northern Ireland’s Euros dream is almost over after they were narrowly defeated 2-0 by Austria this afternoon in their second group game at UEFA Women’s Euro 2022.

After losing 4-1 to Norway in their opening Group A fixture, they were quietly confident of putting points on the board at St Mary’s Stadium in Southampton.

But it was not to be. They worked their socks off in front of over 9,000 fans, however they could not find a reply to Austria, who scored in the first half and in the closing stages.

The defeat means Northern Ireland can no longer qualify from the group even if they win their final group fixture.

Showing four changes from the starting 11 against Norway, Kenny Shiels’ side battled for everything and were unfortunate not to take something from the game.

After an even start Austria started to push forward and winger Julia Hickelsberger-Fuller put a header wide in the seventh minute.

Northern Ireland winger Lauren Wade produced a fine run down the right but was eventually stopped in her tracks. And on the other flank Kirsty McGuinness also had a penetrating run which was snuffed out before Hickelsberger-Fuller put an effort into the side netting.

Wade cut inside and fired in a shot which was comfortably held by Austria keeper Manuela Zinsberger.

Northern Ireland goalie Jackie Burns made a couple of saves as the Austrians began to up the tempo in the sweltering conditions. The temperature gauge was at 35c pitchside just before kick-off.

Austria took the lead on 19 minutes. Midfielder Sarah Puntigam drove in a free-kick which took a deflection off Julie Nelson in the two-man wall and was tucked home by alert Austrian defender Katharina Schiechtl from four yards.

Sarah McFadden, who had by that stage already produced several blocks, raced back to clear the danger as Austria threatened once more.

Austria continued to enjoy the bulk of possession, spraying the ball around and stretching the Northern Ireland midfield and defence.

Demi Vance lifted a cross into the area which was controlled by captain Marissa Callaghan, however she could not get a shot away.

A loose clearance from Burns fell to Austria midfielder Barbara Dunst who curled the ball goalwards and Burns had to react quickly to push her effort onto the bar. It was a super save.

McFadden appeared to be pushed in the back as Vance delivered a corner, however Venezualan referee Emikar Barrera waved the penalty appeals away.

As half-time approached Rebecca Holloway fed McGuinness who let fly from outside the area, however the ball was clutched by Zinsberger.

At the start of the second half Vance and McGuinness got in behind the Austrian defence with some neat interplay, however Vance was blocked off as she tried to trick her way into the box. And then Wade lofted an effort over the bar.

Austria midfielder Sarah Zadrazil, who was a constant threat with her bursts from deep, shot into the side netting

In the 64th minute a rising Dunst snapshot was fumbled by Burns and dropped on to the top of the net.

Minutes later Callaghan fed McGuinness and she jinked past a couple of markers before her cross was cleared.

Rachel Furness, who had been having a quiet match by her standards, sprang to life to guide a header on to the top of the net as Northern Ireland applied pressure.

A McGuinness cross was comfortably held by Zinsberger before the second water break of the game.

Substitute Katharina Naschenweng made sure of all three points for Austria when she added a second two minutes from time, clinically drilling the ball across goal past Burns into the bottom corner.