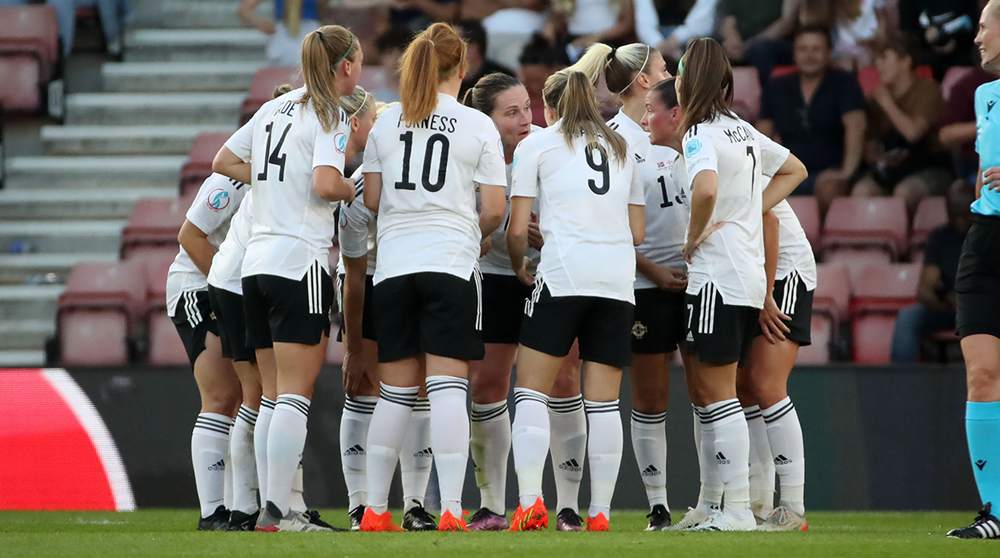 Norway were too hot to handle as Northern Ireland’s senior women’s team made their bow at a major tournament.

In warm and balmy conditions at St Mary’s Stadium in Southampton tonight, Norway showed their class against Kenny Shiels’ side, producing plenty of slick attacking play as they notched up a 4-1 victory. 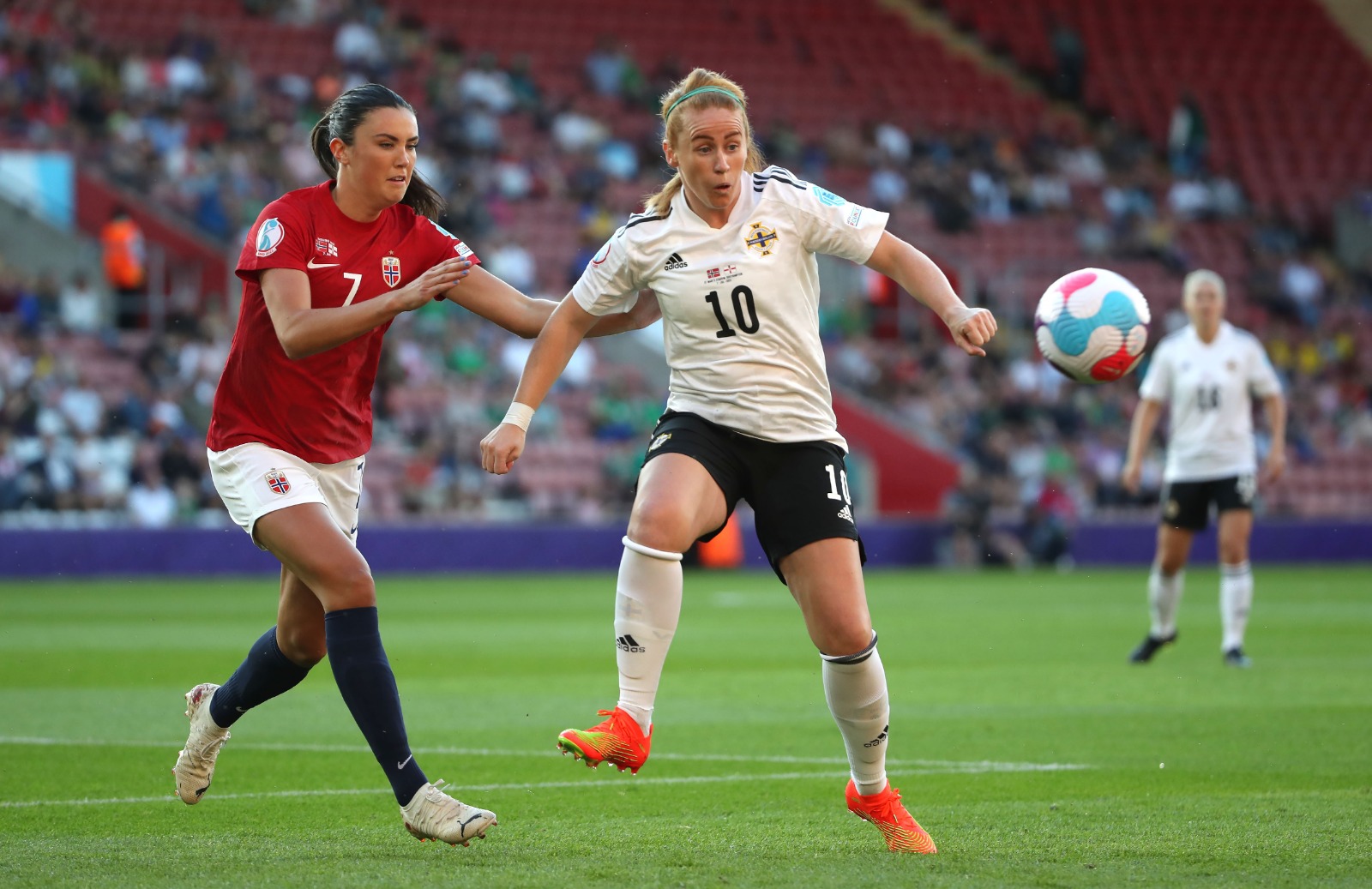 Along with tournament hosts England, the Norwegians are among the favourites to win UEFA Women’s Euro 2022, and they lived up to that tag in the Group A encounter.

The historic game for Northern Ireland saw them constantly put under pressure by Norway, who have two superstars of the women’s game in their ranks – Lyon forward Ada Hegerberg and Barcelona winger Caroline Graham Hansen.

The start to the first group game in the tournament for both sides was cagey as they eased their way into the game in front of just over 9,000 fans.

Guro Reiten slipped the ball to Hegerberg, however Northern Ireland captain Sarah McFadden put the Norway forward under pressure and she fired her shot well over the top. 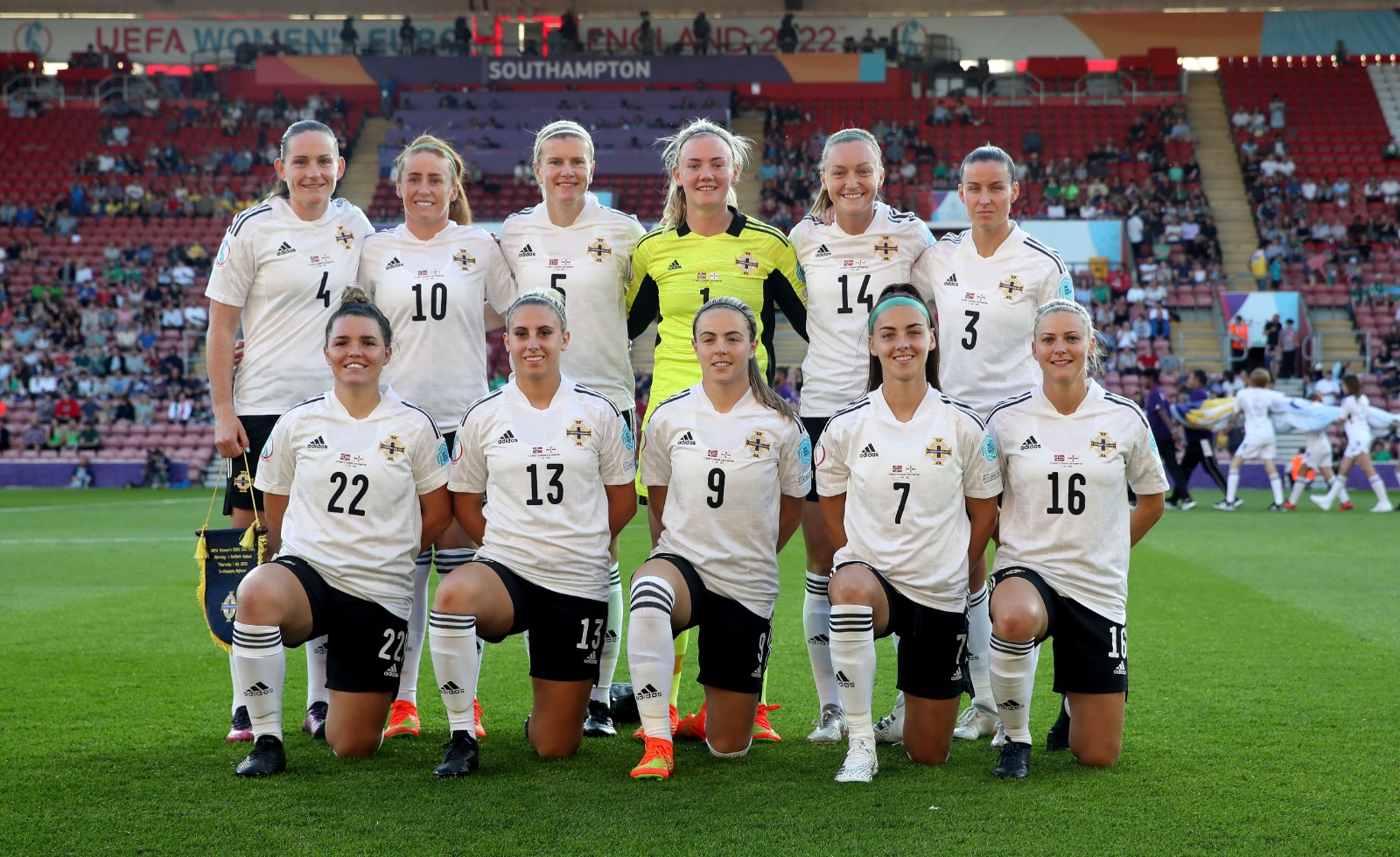 A Rachel Furness cross into the area was cleared before Reiten headed over the top at the other end.

Norway opened the scoring on 10 minutes when the lively Reiten fed Julie Blakstad down the left and she stroked the ball into the bottom corner. It was a clinical finish.

Minutes later attacking midfielder Furness let fly from long range, however her effort was off target.

Burns saved well from Frida Maanum before Norway went two up. Chloe McCarron was robbed by Maanum just outside the area and the midfielder played a one-two with Hegerberg before clipping the ball home.

On 22 minutes Burns saved well from Amalie Eikeland and then she pushed a fine long range effort from Maanum around the post. And Hegerberg headed wide as Norway continued to turn the screw

Abbie Magee battled for possession on the edge of the area and poked the ball to Lauren Wade whose drive went wide of the post. Magee was quickly back on defensive duty to repel another Norwegian raid.

Norway were awarded a penalty when Nadene Caldwell was adjudged to have handled the ball in the area as she tried to clear a Reiten corner. Following a VAR check, Finnish referee Lina Lehtovaara said the ball had hit Caldwell’s elbow and pointed to the spot on 31 minutes. Caroline Graham Hansen blasted the spot kick past Burns.

McFadden and her fellow centre back Julie Nelson continued to thwart attacks as Norway piled forward.

Burns produced a couple of saves before, on the stroke of half-time, Northern Ireland striker Simone Magill fizzed a shot wide.

Northern Ireland pulled one back just after the break when a Demi Vance delivery from a corner caused confusion in the Norway box and Furness eventually lofted the ball to the back post where Nelson was lurking to nod the ball home.

On netting the goal centurion Nelson, at the age of 37, became the oldest scorer at a Euros.

Norway scored their fourth thanks to a sublime free-kick. McFadden conceded a foul on the edge of the area and Reiten stepped up to curl the ball around the wall into the bottom corner.

Marissa Callaghan, the captain of the Northern Ireland squad, entered the fray at the start of the second half and was quickly on the ball. A probing pass put Wade clear down the right, but the danger was snuffed out.

Chances were few and far between as both sides made substitutions. And in the 78th minute Northern Ireland lost striker Magill through injury.

In the closing stages Burns produced another fine save to deny Norway substitute Karina Saevik.