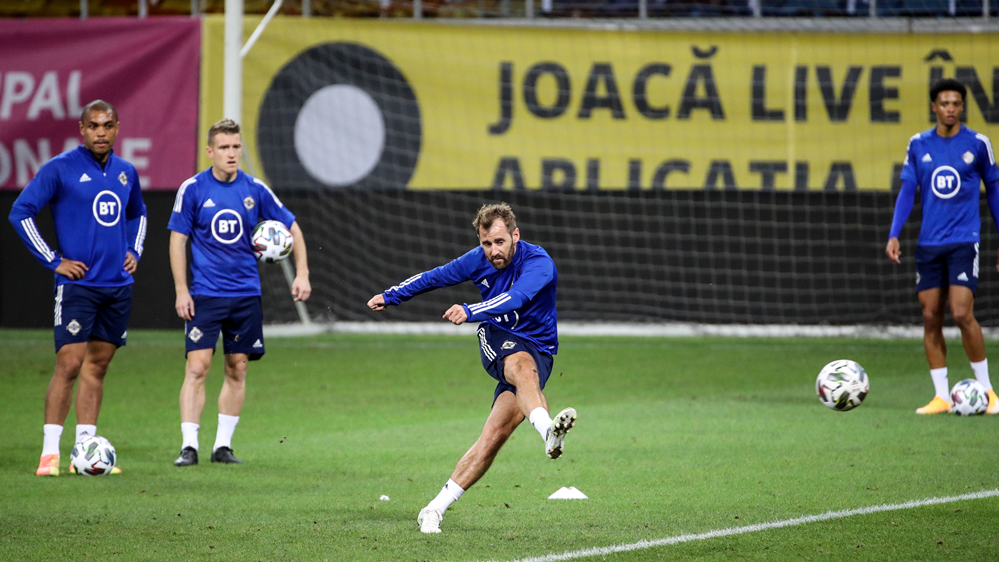 Ian Baraclough’s first match in charge of Northern Ireland will see him come up against someone who has followed a similar path to the senior team hotseat.

Last autumn the Romanian U21s defeated 10-man Northern Ireland 3-0 on their home turf and drew 0-0 in Ballymena in U21 Euro qualifiers.

Since then Baraclough and Radoi have been elevated to the top job by their respective associations. And the first mission for both of them is to get off to a good start in the second edition of the UEFA Nations League.

Radoi will no doubt be looking for another win when the senior sides clash tonight behind closed doors at the National Stadium in Bucharest (7.45pm start UK time), however Baraclough believes his team have the quality and energy to get a result in the League B Group 1 tie.

Like Baraclough, the Romanian boss has a mixture of youth and experience in his panel.

The new Northern Ireland manager has already suggest the bulk of his team will be made up of tried and tested players. He is using this game, and the Nations League match against Norway in Belfast on Monday, as a dress rehearsal for next month’s Euro 2020 play-off semi-final against Bosnia and Herzegovina.

Baraclough will have to shuffle his backline at the Arena Nationala after the vastly experienced Jonny Evans did not travel to Bucharest but his midfield and frontline are not expected to vary much from the sides that faced the Germans and the Dutch last autumn.

The Romanians will also have one eye on a game in October as they are due to face Iceland in Reykjavik in a Euro 2020 play-off semi-final next month.

The Romanian media expect Radoi to be radical tonight, however his team is likely to have a backbone of experienced players.

Lyon’s Ciprian Tatarusanu, who has 67 caps, is expected to be in nets, while former Spurs defender Vlad Chiriches (57 caps), now with Sassuolo in Serie A, will provide defensive stability alongside Dragos Grigore (37 caps), who plies his trade with Bulgarian side Ludogorets.

In the middle of the park Northern Ireland will have to be wary of the goal threat from Nicolae Stanciu. The 27-year-old Slavia Prague player has scored 10 goals for his country in 37 appearances.

Alexandru Maxim, who plays for Gaziantep in the Turkish Super League, looks set to play alongside Stanciu. Maxim, who has 39 caps, has scored five times for his country.

The young guns to watch out for in the Romanian ranks are Ianis Hagi, George Puscas and Florinel Coman.

Hagi, aged 21 and the son of Romanian footballing legend Gheorghe Hagi, is a gifted midfielder who plays his club football alongside Northern Ireland captain Steven Davis and Northern Ireland winger Jordan Jones at Rangers. And Davis rates him highly.

Puscas, 24, is a striker with Reading and is starting to build a good scoring record for his country, having netted six times in his 14 appearances to date.

Florinel Coman, another forward, has only played three times for the Romanian senior team to date and has yet to hit the net, but Radoi likes his style. Coman plays his club football in Romania with FCSB.