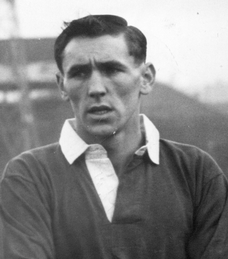 Bobby Braithwaite was among the most exciting attacking talents in the Irish League through the late 1950s and early 1960s.

His talent was perhaps best reflected in his nickname Gento - after the famous Real Madrid wing wizard.

Bobby was brought up on Belfast’s Shore Road and went through the ranks as a teenager with Crusaders before being signed by Linfield.

He enjoyed a glorious spell at Windsor Park, playing in five Irish Cup finals over a six-year period.

In the 1961-62 season he was in the Linfield team that registered a domestic clean sweep. Braithwaite played 50 of Linfield’s 59 games, and scored 12 goals, as the Gibson Cup (Irish League), Irish Cup, Ulster Cup, Gold Cup, City Cup, Co Antrim Shield and North-South Cup nestled in the Linfield trophy cabinet.

In 1963 he left Windsor Park and his job in the shipyard for full-time football with Middlesbrough.

At Ayresome Park he became a firm crowd favourite but he couldn't help Boro out of the Second Division.

A broken leg suffered in a clash with Newcastle’s Jim Iley brought an end to Braithwaite at his best. He spent three seasons trying to rebuild his fitness but was a shadow of his former self and could do little to prevent Boro's relegation to Division Three in 1966.

After just a handful of appearances in the third tier, Braithwaite decided to emigrate to South Africa where he retired as a player in 1974. He subsequently took to coaching and managed both Durban City and Bloemfontein City.