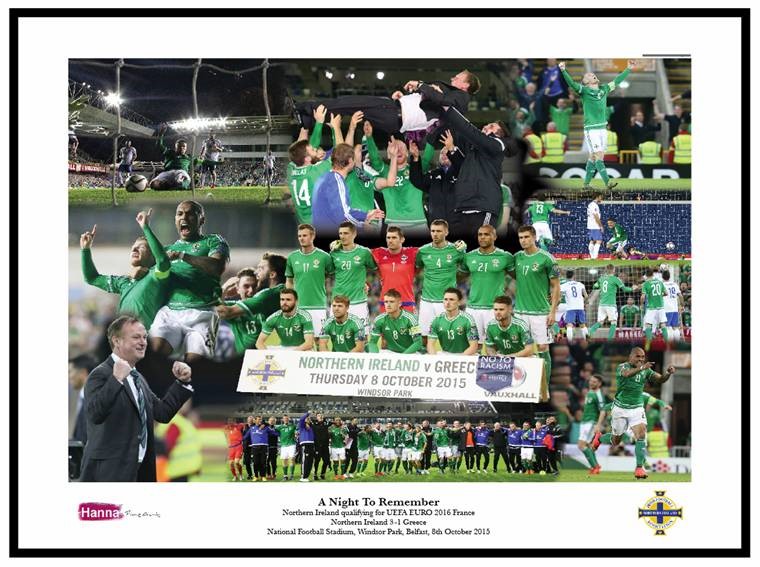 This is your chance to own a unique piece of Northern Ireland football history hand-signed by Michael O’Neill, Steven Davis and Josh Magennis!

The Irish FA is pleased to announce the forthcoming release of an exclusive limited edition print to mark and celebrate Northern Ireland’s historic qualification for UEFA EURO 2016 and raise funds for the team’s charity partner.

Published in a limited edition of only 100 prints, each print has been individually hand-signed by Michael O’Neill, Steven Davis and Josh Magennis to create a valuable piece of Northern Ireland football memorabilia issued to commemorate the 3-1 victory over Greece which automatically qualified the team for UEFA EURO 2016.

Although not due to be officially launched to the general public until December 2015 at the price of £295.00,  the Irish FA - in recognition of the magnificent support the team has and continues to receive – has reserved a number of prints exclusively for Official Northern Ireland Supporters which are available to pre-order at the special price of £195.00.

*  The framed print signed by Michael O’Neill, Steven Davis and Josh Magennis.
*  Photographs of the manager and the players signing the prints.
* A £100 gift voucher which can be redeemed against the list price of any sporting print from our publishing partner Hanna Fine Art.

This is your chance to be one of only 100 people who will ever own this much-coveted and historic piece of Northern Ireland football history.

Only a limited number of prints are available for pre-order so if you would like to purchase this rare and valuable print please call Maria Hanna on 07711 725865 or email modernirishart@btinternet.com today.