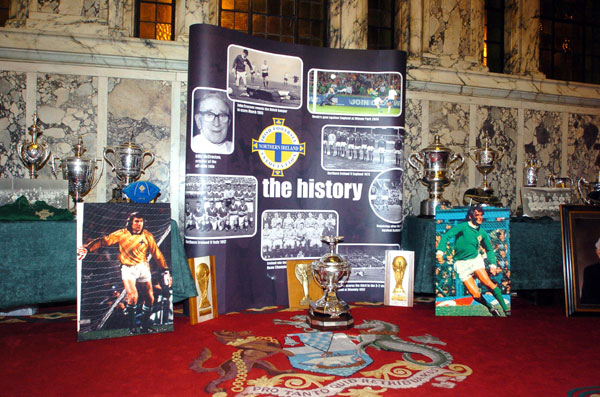 The Association was founded in the Queen’s Hotel in Belfast on 18th November 1880. It is the fourth oldest governing body in the world behind the other three home associations.

The inaugural meeting was held at the request of the Cliftonville club - the oldest football club in Ireland.

Clubs from Belfast and outlying districts gathered together with a view to creating a unifying constitution and set of rules along the lines of those adopted by their Scottish counterparts some seven years earlier.

The aims of this fledgling body were to promote, foster and develop the game throughout the island of Ireland.

Apart from Cliftonville, other Belfast clubs represented at the first gathering included Avoniel, Distillery, Knock and Oldpark. Moyola Park (Castledawson) and Limavady-based Alexandra were the teams from outside the city who attended the meeting.

Football itself first came to Ireland a couple of years earlier when Scottish clubs Queen’s Park and The Caledonians staged an exhibition at the Ulster Cricket Ground at Ballynafeigh in south Belfast after John M McAlery, the first secretary of the new association, had discovered the game while on honeymoon in Edinburgh.

International football followed soon after although a 13-0 defeat at the hands of England at the Knock Ground at Bloomfield in east Belfast in 1882 was not exactly the perfect start.

Up until partition in 1921 the Irish FA governed football across the entire island but a decision by Dublin clubs to form their own association led to the formation of the FAI (Football Association of Ireland).

Nowadays the Irish FA looks after the interests of the game in Northern Ireland only.

The association moved to its current headquarters at Windsor Avenue in south Belfast in 1960 after previously being based at premises in Waring Street and then Wellington Place in the city.

And early next year the Irish FA will move into a new home at the National Football Stadium at Windsor Park.