Adidas and the Irish Football Association have today revealed the new look Northern Ireland away shirt which will be worn by the team at UEFA Euro 2016 at a Global showcase event in Paris. The new look kit has been revealed at an adidas event alongside the release of the official match ball for UEFA Euro 2016 Finals.

The new away shirt has re-introduced iconic green detailing on the chest and sleeve, designed to create impact on pitch next summer when the likes of Davis, Baird and Lafferty take to the pitch at UEFA Euro 2016.

The new look away shirt takes some inspiration from the 1986 away shirt, with a traditional blend of a clean white base and a green chest bar design.

The new Northern Ireland away kit for 2015/16 will be available to pre-order exclusively from www.jdsports.co.uk/Northern-Ireland from today and available instore & online early in December. 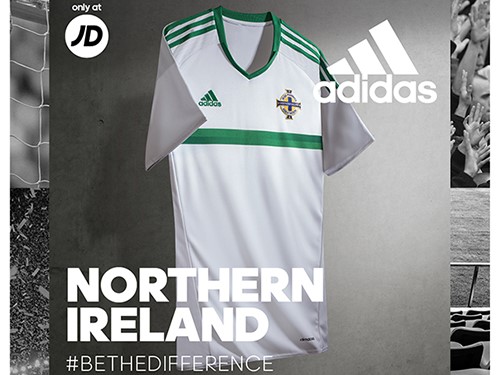