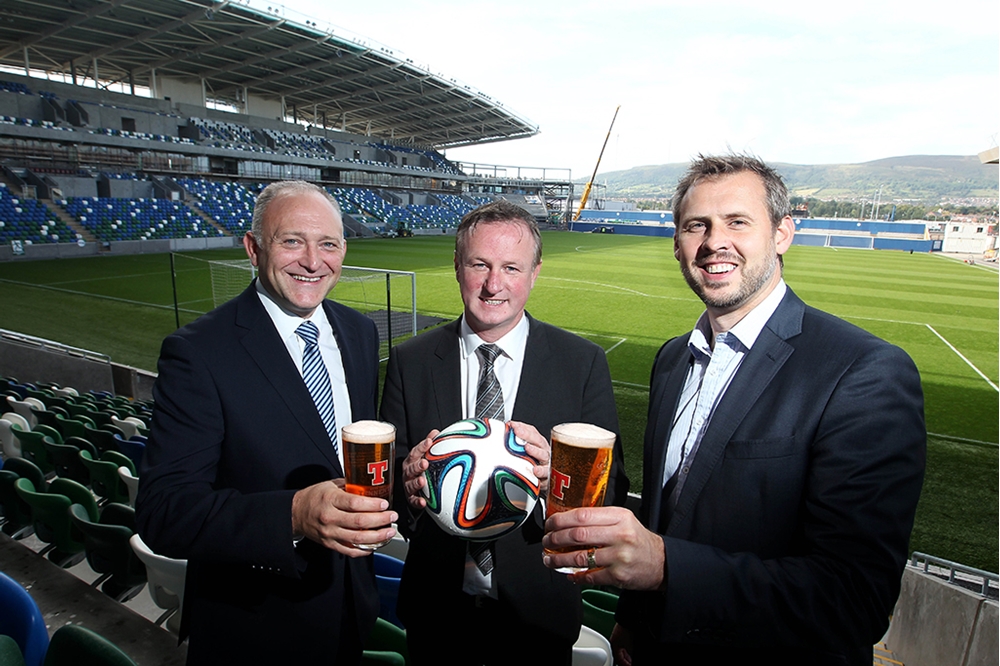 As part of the six-figure investment, Tennent’s NI has also secured a five year contract for the supply of draught beers and ciders to the new National Football Stadium for Northern Ireland at Windsor Park, currently nearing build completion.

Leading the ‘Cheers!’ as he announced the deal with the IFA, Brian Beattie, Marketing Director at Tennent’s NI, said;

“This is a great association for us and we’re looking forward to ensuring that it isn’t only the football that will be world-class!  At Tennent’s NI we have a great range of global brands and we’re delighted to be bringing them to the IFA’s new stadium whose commitment to excellence and innovation sits very happily with our own business ethos.

“It is a pleasure to be working with like-minded people at the IFA, developing the new opportunities afforded by the National Football Stadium for Northern Ireland at Windsor Park, and preparing to showcase our latest brand innovations.

“We are delighted to have won the contract to pour our products within the corporate facilities of the new stadium and in the venue’s first public bar which will open in the New Year. It’s an exciting project and Tennent’s NI is happy to be at the heart of the sociability which surrounds soccer.”

Delighted to welcome Tennent’s NI on board at the New National Football Stadium at Windsor Park, Oonagh O'Reilly, Sales and Marketing Director of the Irish FA, said;

“A successful commercial relationship is based on understanding each other’s objectives and aspirations.  The team at Tennent’s NI recognised our ambition and demonstrated an appetite to partner with us on our journey.  Their role in enhancing the experience at the new National Football Stadium at Windsor Park is vital and I look forward to working closely with them for the next five years.”