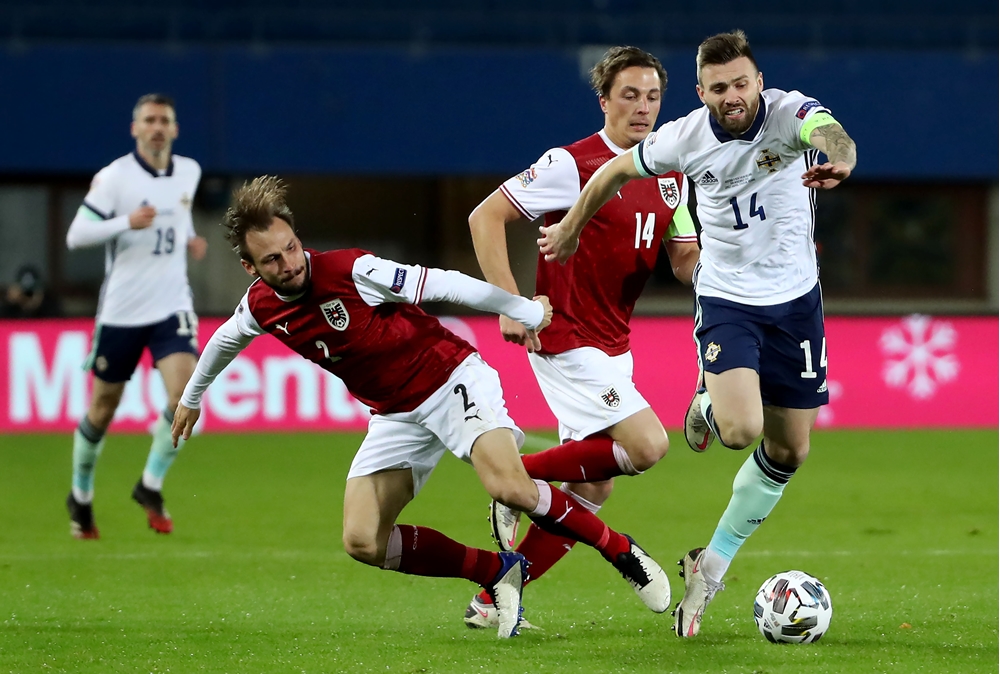 Ian Baraclough’s team took the lead in the UEFA Nations League clash through substitute Josh Magennis, however goals from Austrian subs Louis Schaub and Adrian Grbic late on prevented them from claiming what would have been a deserved point.

Northern Ireland, showing eight changes from the side that started against Slovakia in the Euro 2020 play-off final in Belfast on Thursday, started well against the League B Group 1 leaders at the Ernst Happel Stadion.

The first chance of the game fell to Liam Boyce on eight minutes. The striker pounced on a loose ball and raced towards goal but dragged his shot wide of the post.

Minutes later Daniel Ballard sent a looping header over the top from a Paddy McNair free-kick.

Xaver Schlager fired an effort from distance over the top for the Austrians in the 17th minute and six minutes later he just failed to connect with an inviting Stefan Ilsanker cross at the back post.

The Northern Ireland defence and midfield worked extremely hard to keep Austria at bay but the hosts came close just before half-time when Michael Gregoritsch got on the end of a David Alaba corner, however his header went wide of the upright.

Austria put their foot on the gas after the restart and the first opportunity of the second half fell to Marcel Sabitzer. He produced a right foot curler which swerved over the bar.

Then Ballard blocked a dangerous looking Alaba cross and another from Gregoritsch, while goalkeeper Michael McGovern superbly plucked an Alaba delivery out of the air before saving a header from Austria captain Julian Baumgartlinger.

Alistair McCann had a fine debut in the middle of the park and along with Michael Smith, McNair and captain Stuart Dallas he provided a solid shield for the back line.

Northern Ireland took the lead on 74 minutes. The Austrian defence stood still as substitute Gavin Whyte fed McNair who slipped in Magennis and he drilled the ball past Austrian keeper Pavao Pervan.

Austria equalised six minutes later, however, when Grbic found Schaub inside the six-yard box and he hooked the ball past McGovern.

It was tough on a Northern Ireland side who had worked so hard to repel the hosts’ attacks throughout the match.