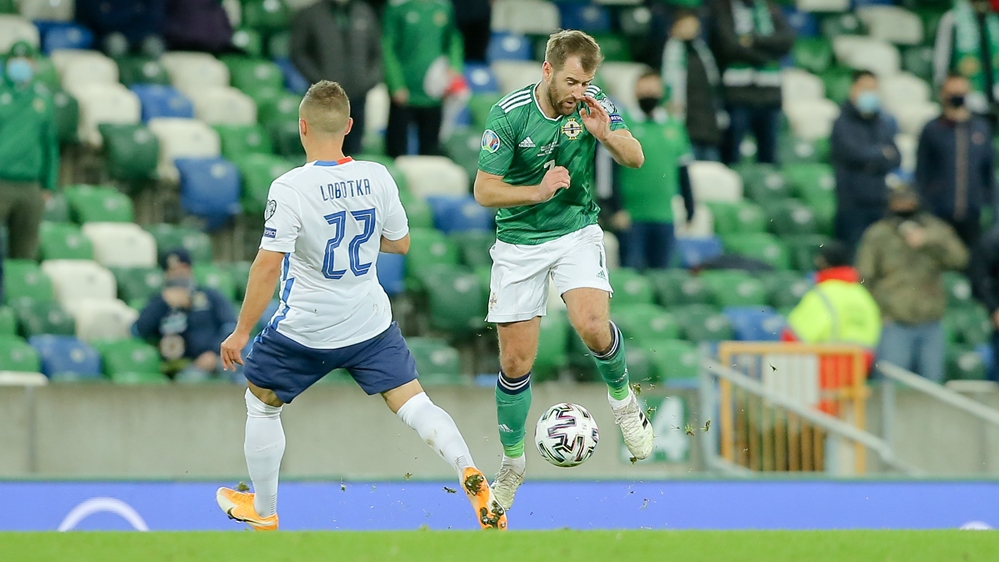 Northern Ireland will be without five key players when they face Romania in Belfast tomorrow night, it was confirmed today.

Steven Davis is the latest player to withdraw from Ian Baraclough’s panel ahead of the Nations League match at the National Football Stadium at Windsor Park.

The Northern Ireland captain has had to leave the squad for personal reasons.

His withdrawal means Davis will now have to wait until next year to potentially equal and break former England goalkeeper Peter Shilton’s British caps record. The Rangers midfielder currently has 124 caps, while Shilton’s tally was 125.

Both Aberdeen winger Niall McGinn and Stoke City midfielder Jordan Thompson missed Sunday night’s UEFA Nations League clash with Austria through injury – and they will not be available tomorrow night either.

McGinn and Thompson each suffered knocks in the Euro 2020 play-off final defeat against Slovakia in Belfast last Thursday and have not recovered sufficiently to play against the Romanians. They have returned to their respective clubs for treatment.

Also out are Reggina striker Kyle Lafferty and Middlesbrough midfielder George Saville. Both left the squad on Friday to return home for personal reasons.

Matthew Kennedy, the Aberdeen winger, was named in the original squad for this month’s triple header but pulled out due to injury. However, he has now returned to the panel after making a speedy recovery.

Kennedy trained with the rest of the squad at the National Football Stadium this morning.