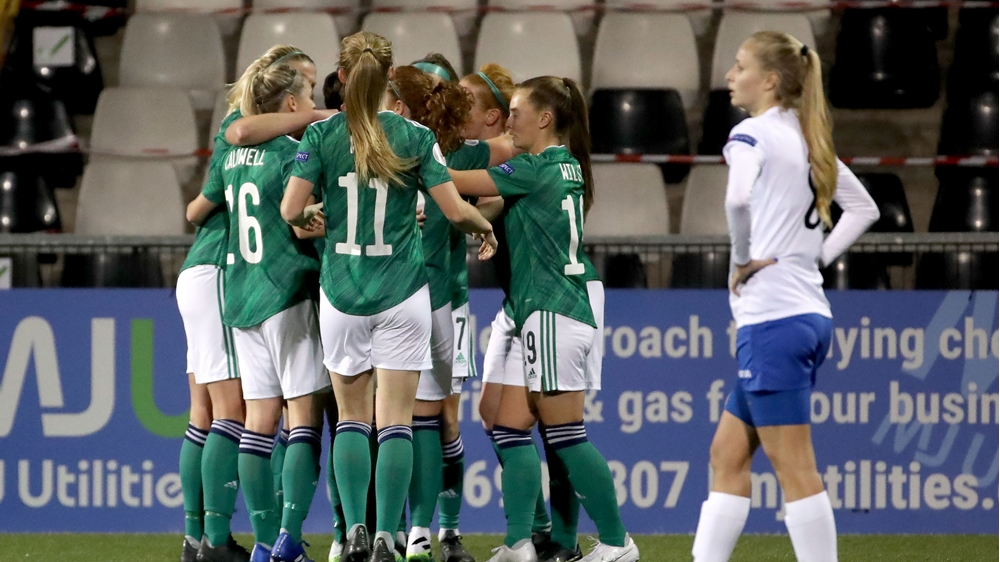 The Euros dream is alive and kicking for the Northern Ireland senior women’s team after they defeated Belarus 3-2 at Seaview tonight.

The result means if Kenny Shiels’ side defeat Faroe Islands at the same venue next Tuesday they will secure a play-off for a place at Women’s Euro 2022 in England.

Northern Ireland had to dig deep at times but goals from Kirsty McGuinness and player of the match Rachel Furness (penalty) and an own goal by the Belarus keeper were enough to secure the famous victory.

Northern Ireland came flying out of the blocks in the C qualifying match and opened the scoring after just two minutes.

Kirsty McGuinness played in Emily Wilson but her shot was pushed away by advancing Belarus keeper Natalia Vaskabovich, however McGuinness met the rebound and rifled the ball home. It was a superb finish.

On 13 minutes there was a controversial incident. Rachel Furness’ shot was fumbled by Vaskabovich and the ball appeared to drop over the line. Referee Silvia Domingos ruled that it did not cross the line, however. Minutes later the busy Furness had another effort from distance.

In the 16th minute Belarus grabbed an equaliser. Anastasiya Novikava played the ball forward towards Anastasija-Grazyna Shcherbachenia. Flaherty raced off her line but the striker got to the ball first and drove the ball home from 20 yards.

Ten minutes later Furness shot over the top from distance and then a Demi Vance shot was comfortably gathered by the visitors’ keeper.

A low shot from Belarus midfielder Anastasiya Shlapakova was saved by Flaherty before an Emily Wilson cross-cum-shot was pushed over the top by Vaskabovich.

Northern Ireland pushed forward after the break and began to apply pressure.

Furness missed the target before a fine McGuinness delivery from a free-kick was headed over by defender Ashley Hutton. Minutes later McGuinness played in Marissa Callaghan but her low shot from eight yards was smothered by the Belarus stopper.

The girls in green and white took the lead again in the 61st minute via the penalty spot. Furness was hauled down as Vance delivered a free-kick into the area and the ref quickly pointed to the spot. Furness dusted herself down before stepping up to coolly blast the penalty into the corner of the net.

Minutes later Furness twisted and turned just outside the area before firing in a shot from an angle which was saved by Vaskabovich.

Flaherty produced a fine stop from a long range shot from substitute Karyna Alkhovik before Belarus levelled on 67 minutes. Hanna Pilipenka fed Belarus captain Shcherbachenia and she slotted home her second of the night.

Wilson had an effort saved before Northern Ireland restored their lead. McGuinness advanced down the left before unleashing a fierce drive which rebounded off the post but hit Vaskabovich’s back and flew into the net to make it 3-2.

McGuinness and Lauren Wade had further opportunities before Furness shot straight at the keeper.

As the game entered the closing stages the visitors stepped it up a gear and Hanna Kaziupa shot inches over the top.

Deep into added time Belarus were awarded a free-kick. Linnik fired it in but Flaherty comfortably collected the ball and that was the last real action of what was often an end to end game.