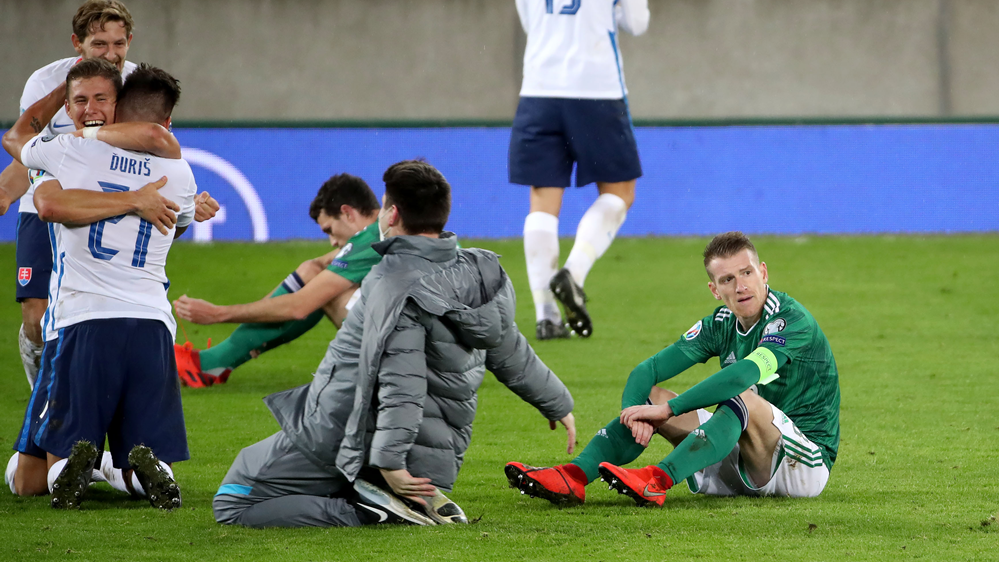 Northern Ireland were narrowly beaten by Slovakia in the UEFA Euro 2020 Path B Play-Off Final in Belfast tonight.

An extra-time strike from substitute Michal Duris was enough to secure a 2-1 victory for the Slovakians as they booked their place at next summer’s European Championship finals.

Showing just one change from the team that started the last four encounter against Bosnia and Herzegovina last month, with Conor Washington replacing the injured Corry Evans, the boys in green and white made the early running but their final ball let them down.

The first effort came after seven minutes when Paddy McNair got on the end of a Jamal Lewis cross, however McNair’s header was easily collected by Slovakian keeper Marek Rodak.

The Slovakian’s first shot – an Albert Rusnak drive from an angle – flew over the top but they took the lead on 16 minutes when George Saville misdirected a header and Juraj Kucka latched on to the ball before striding forward and finding the net with a low drive.

In the 21st minute Northern Ireland almost grabbed an equaliser. Niall McGinn’s cross-cum-shot had Rodak back-peddling but he managed to tip the ball over the bar.

On the half-hour mark Stuart Dallas blocked a goalbound shot from Robert Mak, while a McNair shot down the other end was blocked by Tomas Hubocan.

Towards the end of the half Northern Ireland pushed forward. Dallas screwed a shot well wide of the target and then McGinn fired an effort over the bar from just inside the area.

After the restart Baraclough’s boys continued to press. McNair and McGinn both fired in inviting crosses before Saville steered an effort wide of the upright. McGinn played in Washington but he shot straight at the keeper.

Kucka fizzed a shot wide and then for a lengthy spell Slovakia soaked up pressure through quick passing and good distribution from the back, especially from Milan Skriniar and Lubomir Satka, while Northern Ireland’s final ball again too often let them down.

The fans made plenty of noise as the home side tried to find a breakthrough but the Slovakian back line stood firm.

In the 87th minute Northern Ireland’s persistence paid off and they levelled through a Skriniar own goal. McNair’s running power took him to the byline and his cutback was turned into his own net by the defender.

Two minutes later substitute Gavin Whyte fed Lafferty, who twisted and turned in the box before smashing a shot against the post. It was so close.

Slovakia took the lead again on 110 minutes when a long ball hit Jonny Evans’ shins and substitute Michal Duris picked up the loose ball before slipping past Evans and netting with a crisp low shot. It proved to be the winner.

Right at the death Thompson swung in a cross which was met by Evans but Rodak was equal to his header and that was the last meaningful action of the match.