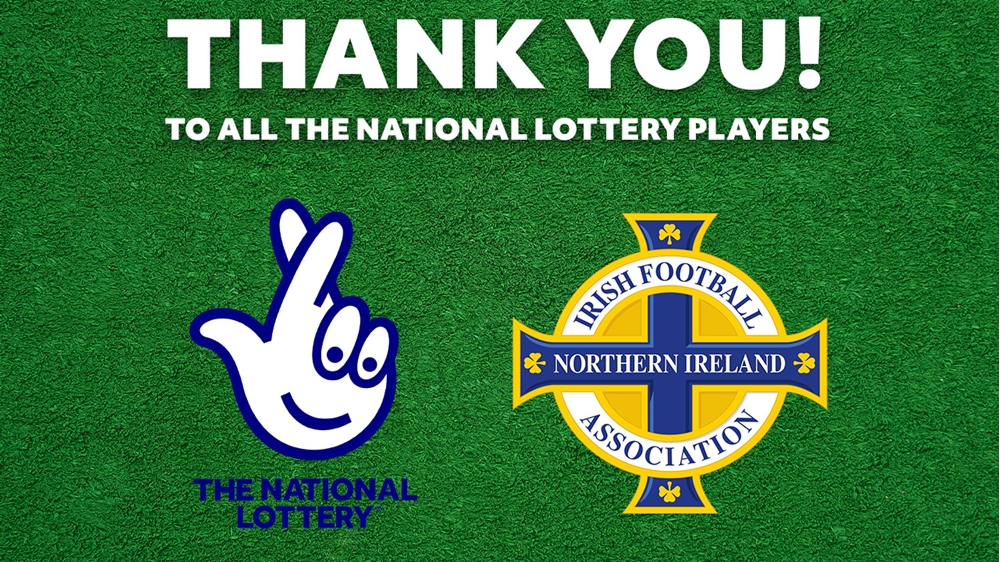 The Irish FA is delighted to announce that all Northern Ireland Football League (NIFL) clubs will each receive a share of £450k of financial support as part of a unique partnership with The National Lottery.

The partnership with The National Lottery will benefit all men’s and women’s clubs in the NI Football League.  It will provide vital support as clubs are either forced to play without fans or not able to play football at all, owing to COVID-19 restrictions.  As a thank you, National Lottery players, who make a difference every time they buy a ticket, will also get a range of benefits – including free tickets once stadia have fully reopened and VIP experiences with the Northern Ireland national side.

The clubs are important parts of their communities and the funding recognises their role beyond just a 3pm kick-off on a Saturday afternoon. They provide a source of pride to their local areas and have been at the heart of their communities through the duration of the pandemic.

The funds will play a key role in ensuring that the clubs can continue to exist and operate during the pandemic.  The money will be distributed by the Irish FA to clubs ensuring their continued survival.

Patrick Nelson, Chief Executive Officer for the Irish FA, said: “Thanks to National Lottery players, football clubs are able to protect and enhance the crucial work they do serving their communities right across Northern Ireland. We’re delighted to play our role in this brilliant initiative.”

Andrew Johnston, Managing Director of the NI Football League, said: “This funding is a huge boost to our member clubs at a particularly desperate time. We would like to express our sincere thanks to The National Lottery for their support in safeguarding the immediate future of our clubs.

Secretary of State for Northern Ireland, Brandon Lewis, said: “Men’s and women’s clubs in the NI Football League play a vital role in their local communities, and have been facing tough times recently because of coronavirus restrictions. We are extremely grateful to The National Lottery for this vital funding package, which will go a long way in helping these clubs keep going until fans are safely able to return to grounds and stadia.”

Nigel Railton, Chief Executive of National Lottery operator Camelot, said, “The National Lottery and its players make a massive difference to communities across the UK day in, day out – and have been doing so for the past 26 years. So we’re really delighted to be working with the Irish Football Association to support these incredibly important clubs in the Northern Ireland Football League, enabling them to continue playing such an important role in their local communities. I am a huge football fan and I think all fans will be delighted to know that their clubs are getting the support they need.”

The partnerships follows a similar initiative between the FA and National League in England, and the FAW and Cymru Leagues in Wales. Work continues on a partnership with the Scottish FA. The money for these initiatives is coming from a National Lottery promotional fund. It is not being funded by money allocated for National Lottery Good Causes or by Camelot.