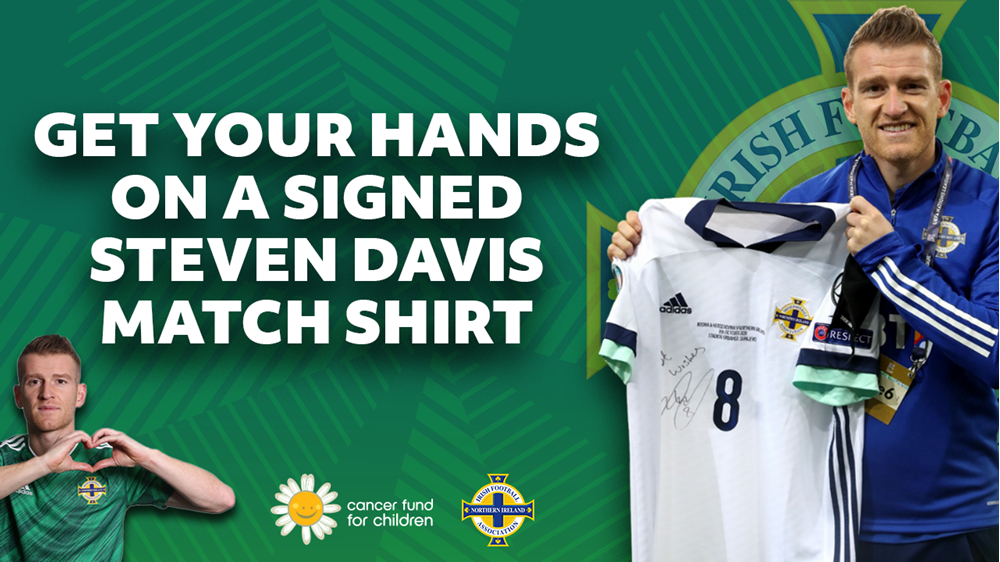 Northern Ireland captain Steven Davis has donated a signed match shirt from his record-breaking appearance against Bosnia and to Herzegovina to support Cancer Fund for Children.

And now the inspirational midfielder is handing over the shirt to the Northern Ireland senior men’s team’s charity partner to help launch a raffle to raise vital funds for their work.

Every week in Northern Ireland another three children and young people aged 0-24 years old will be diagnosed with cancer.

As Northern Ireland’s leading children’s cancer charity, Cancer Fund for Children, understands the devastating impact a cancer diagnosis and its treatment has on the whole family, and that beyond the essential medical care, there is a family life that needs to be rebuilt.

Steven Davis said: “I’m delighted to be supporting the Cancer Fund for Children in this way.

“Our win in Bosnia was an unforgettable night and now the GAWA, who would ordinarily be there roaring us on, can recognise it in their own way and support a brilliant cause in the meantime.”

Phil Alexander, CEO of Cancer Fund for Children added: “We’re absolutely delighted that Steven has donated such a significant shirt from his Northern Ireland career to benefit children and young people with cancer. The Irish FA have been fantastic supporters of Cancer Fund for Children and this is such a great opportunity for the fans to win such a unique item of NI footballing history, while also raising much-needed funds for local families living with cancer.”