The annual awards recognise the incredible work and commitment of football clubs and volunteers who give up their time and make a long-lasting impact on young people and communities across Northern Ireland.

Over the past few years there have been some particularly inspirational winners, given the challenges presented by the global pandemic. In this article we celebrate some of the previous grassroots football heroes we have had the privilege of meeting. 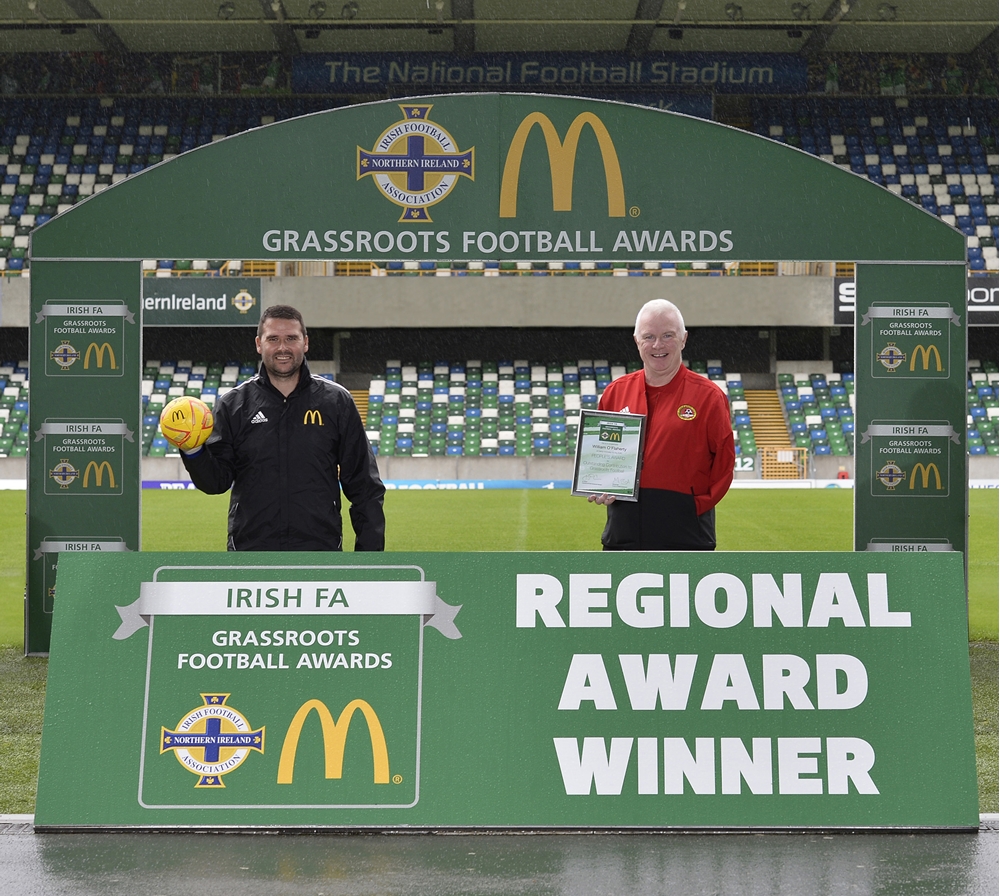 Billy O’Flaherty is a previous winner of the prestigious People’s Award which celebrates the outstanding contribution made by an individual to football in their local community and beyond.

Billy is a founding member of Carniny Amateur and Youth Football Club in Ballymena and is widely regarded as a football stalwart in the Mid-Antrim area having been involved in grassroots football for more than four decades.

Just last week he was presented with a merit award from the Ballymena Saturday Morning League for over 30 years’ service on the league committee.

He said: “Local football has been one of the best tools for cross-community relations in Northern Ireland and we must not underestimate that. Football is often the common denominator that brings people from all walks of life together, which has helped us take great strides over the years towards becoming a more inclusive society.” 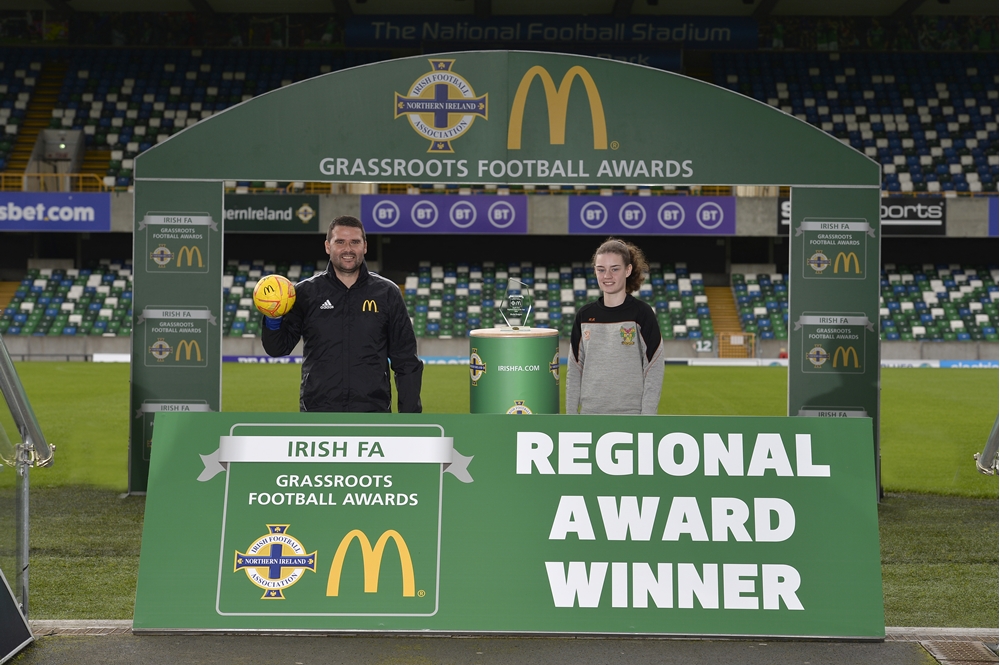 Rachael Rodgers, a coach at Mid Ulster Ladies FC in Cookstown, won the Wes Gregg Coach of the Year award in 2020. Due to restrictions in place at the time, the 2020 awards were streamed online instead to showcase those who dedicate hours of their time for the good of grassroots football in Northern Ireland.

The Wes Gregg Coach of the Year award recognises the outstanding contribution of a coach at a grassroots club in Northern Ireland or Fun Football provider. It celebrates an individual who encourages people starting, staying and/or succeeding in football through high quality coaching.

Rachael has been heavily involved in coaching at Mid Ulster Ladies FC and is head of the development centre at the club.

She said: “Mid Ulster Ladies FC gives young girls in the local community the chance to play football and express themselves, meet new people and, most importantly, have fun.

“McDonald’s have helped us massively, for example they have provided funding that has allowed us to put coaches through Level 1 and Grassroots badges, as well as purchase equipment for the club.” 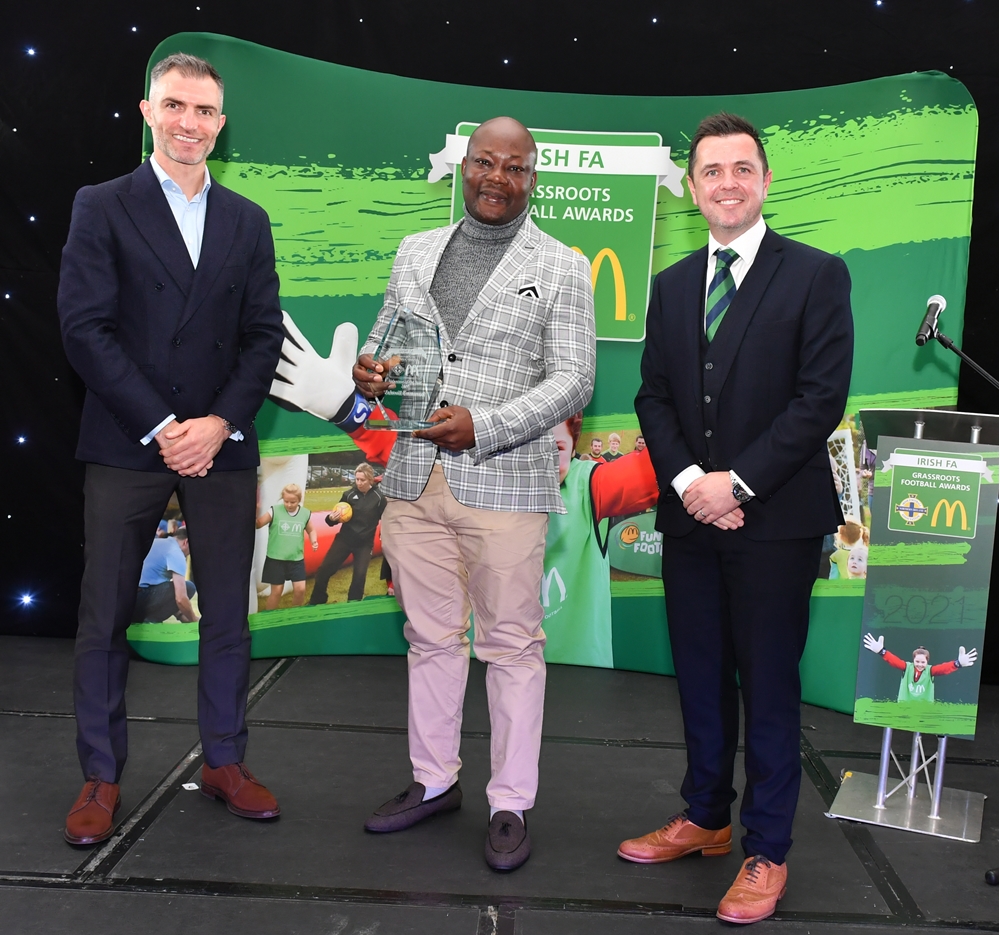 Jahswill, who was last year’s Volunteer of the Year, is the founder of Multi-Ethnic Sports and Culture Northern Ireland (MSCNI), a charity which engages hundreds of people from a wide range of cultural backgrounds.

The Volunteer of the Year Award recognises the countless hours that dedicated volunteers across Northern Ireland give to help their local club and game.

Jahswill, who is also a previous winner of a Spirit of Northern Ireland award, commented: “We use sport to bring the ‘Black, Asia and Minority Ethnic’ (BAME) community closer to the local community in Northern Ireland.

“When you win one of these awards it is like a booster. It gives you energy to do more.”

He added: "One of the unforgettable moments of my life was when we [the award winners] made the lap of honour during Northern Ireland v Lithuania. I was overwhelmed when thousands of fans stood up and clapped for us. I felt appreciated and proud to be a valuable volunteer. Money can't buy you one of those moments."

Nominations are still open and will close on 30 June with regional award winners set to be announced throughout August.

The official awards ceremony is due to take place in The National Stadium at Windsor Park on 24 September prior to Northern Ireland’s UEFA Nations League game against Kosovo.

"Without grassroots football volunteers none of this could happen," he said. “Through the years I have witnessed first hand the significant impact that McDonald’s Fun Football has had, and continues to have, on the lives of young people in Northern Ireland.”

For more information or to nominate your 2022 grassroots football hero visit http://www.irishfa.com/grassrootsfootballawards