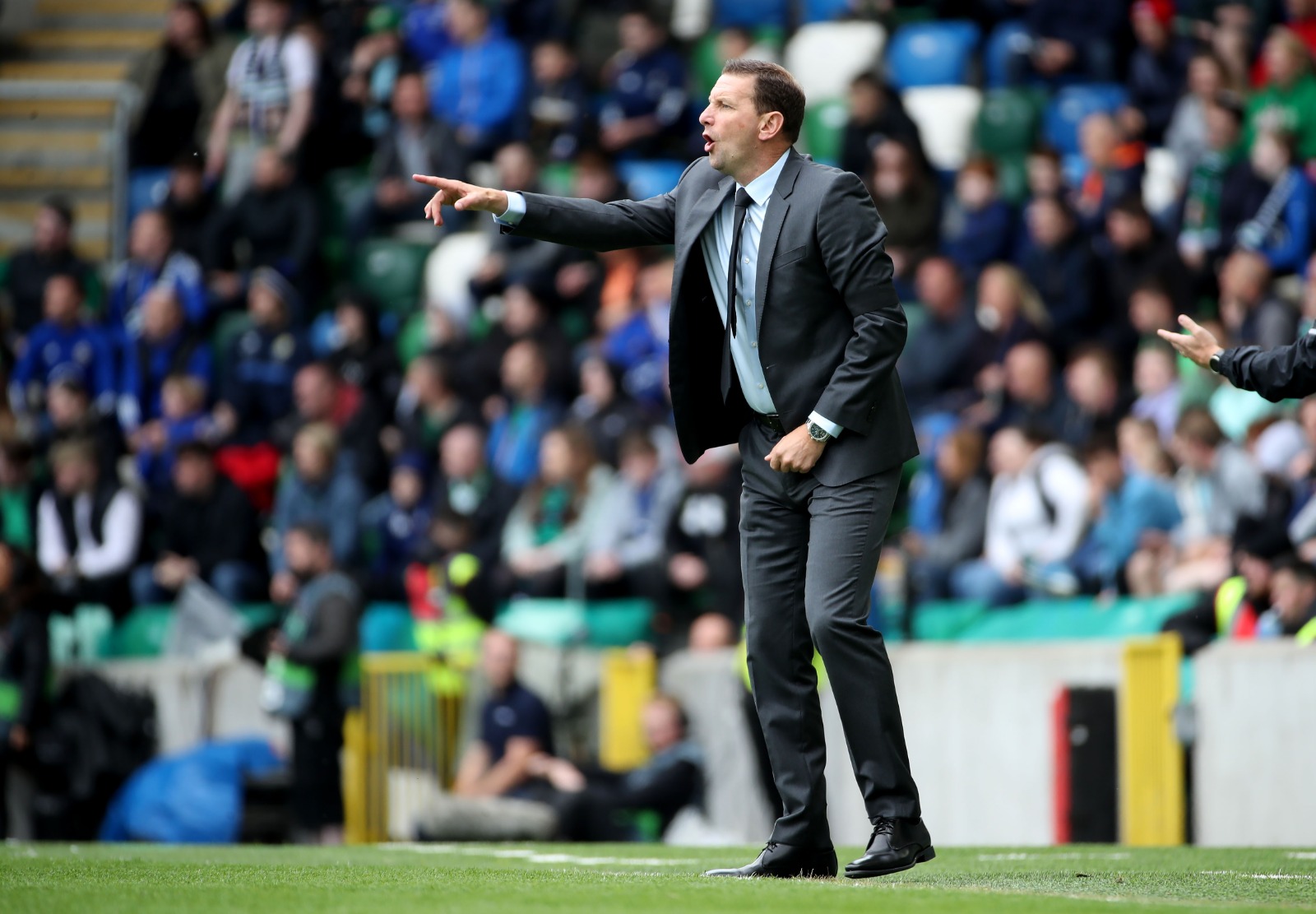 Northern Ireland came from behind to draw 2-2 with Cyprus at the National Football Stadium at Windsor Park this afternoon.

Goals from Paddy McNair and Jonny Evans in the final 20 minutes earned Ian Baraclough’s team a point in the UEFA Nations League encounter.

The fightback was sparked by a series of substitutions which brought fresh impetus to the team. Subs Jordan Thompson and Niall McGinn were particularly influential.

The result means Northern Ireland remain third in League C Group 2 with two points from four matches. During this month’s Nations League quadruple header they have lost 1-0 to Greece at home, 3-2 to Kosovo away and drawn with Cyprus away (0-0).

In today’s game Northern Ireland had seven attempts on target, out of 19 attempts in total, while Cyprus had two on target out of five attempts.

The first opportunity of the game fell to the boys in green and white. Ciaron Brown launched a throw-in towards the six-yard box which was flicked on by fellow defender Daniel Ballard into the side netting.

McNair, restored to the starting line-up after missing the game against Kosovo through injury, appeared to be bundled over by Cypriot defender Alex Gogic inside the area, however the referee waved appeals for a penalty away.

Ballard was airborne again to get on the end of a McNair corner, however he headed well over the top. Then Shayne Lavery slipped in McNair but his effort was blocked.

Cyprus opened the scoring on 32 minutes. Midfielder Chambos Kyriakou curled a free-kick goalwards and striker Andronikos Kakouilli nipped in front of the home defence to head the ball past Trevor Carson into the bottom corner.

Steven Davis tested Cyprus keeper Andreas Christodoulou with a long range effort that he had to tip over the bar.

As half-time approached Conor McMenamin got in behind the Cypriot defence but the keeper managed to block his shot, while a raking Davis pass just evaded Lavery as he raced towards goal. Down the other end Kakoulli fired a shot well over the top.

Cyprus went two up five minutes after half-time. Captain Dimitris Christofi ran at the heart of the Northern Ireland defence and slipped the ball to Marinos Tzionis. He held off Brodie Spencer and slid the ball past Carson - and Kakoulli was on hand to tuck the ball home from close range.

Substitute Jordan Thompson whipped a free-kick into the area which was steered over the top by Kyle Lafferty before Spencer had a header blocked at the back post and Christodoulou plucked another Thompson delivery out of the air.

On 71 minutes McNair pulled a goal back for Northern Ireland. Substitute Conor Bradley ran to the bye-line. His scuffed cross was not cleared and fellow sub Dion Charles darted in to push the ball back to another sub, Niall McGinn. His shot was pushed away by the Cyprus keeper but the ball came back off one of his own players into the path of McNair who poked it home from two yards.

Then McGinn clipped the top of the bar with a lovely chip as Northern Ireland piled forward in search of an equaliser.

Thompson played a neat through ball to the onrushing Conor Bradley but the substitute scooped his effort over the bar before Thompson, on his weaker right foot, steered an effort past the upright.

In the 88th minute a Thompson delivery from a corner was met by Ballard, but he steered his header wide.

Two minutes later McNair fired in an inviting cross which Whyte, arching back, headed on to the top of the net.

Deep into added time Northern Ireland equalised. McGinn fired in a great cross which was flicked on by Dion Charles and Jonny Evans stuck out a leg to put the ball past the keeper.

Christofi then had the ball in the net for Cyprus but the effort was ruled out as the striker was deemed to be in an offside position when he steered it home.

Right at the death, as the ball bobbled around the box, McGinn fired an effort just wide of the upright.

There was a minute’s applause at today’s game in honour of former Northern Ireland boss and player Billy Bingham, who passed away on Friday. The players wore black armbands in his memory.