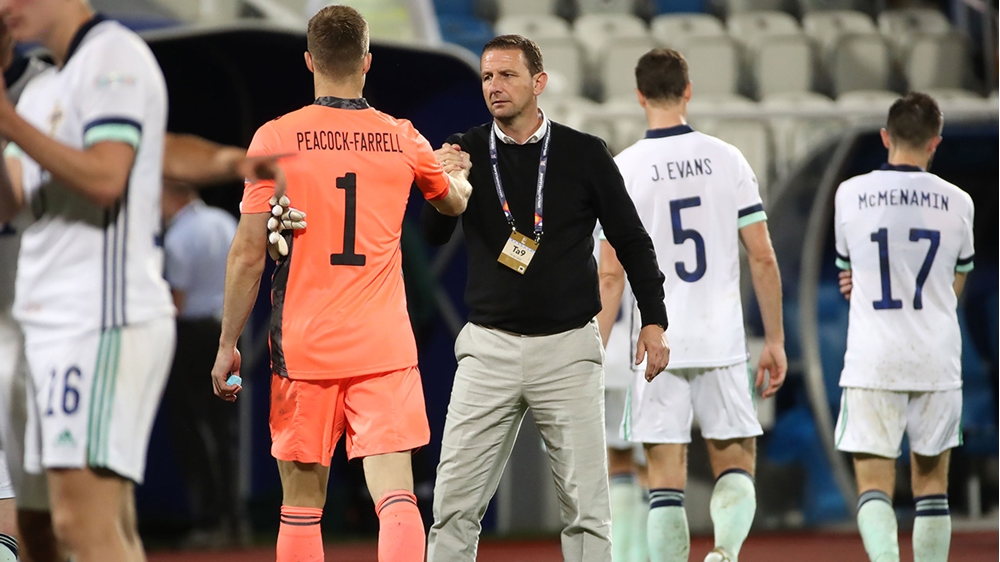 Northern Ireland were defeated 3-2 by Kosovo in an entertaining UEFA Nations League game in Pristina tonight.

Kosovo dominated the match for long spells, however Ian Baraclough’s team kept battling away and could arguably have nicked a point in the closing stages when they upped the tempo and put the home side under sustained pressure.

An 83rd minute goal from Daniel Ballard, when Northern Ireland were 3-1 down, sparked a frantic finale, however the boys in green and white could not pull level.

Kosovo produced some slick interplay throughout the game in front of just over 11,000 fans at the Stadiumi Fadil Vokrri in the Kosovan capital. The crowd included around 500 Northern Ireland supporters.

Baraclough made five changes to his starting eleven as he attempted to put more points on the board in the group following the 1-0 defeat to Greece last week and the 0-0 draw away to Cyprus on Sunday.

Early on Ali McCann whipped in a corner, however it sailed over the head of Ballard.

Kosovo, who had previously beaten Cyprus and lost to Greece in the group, took the lead through a penalty in the ninth minute.

Minutes later Jonny Evans directed a McCann corner over the top before George Saville had a shot deflected over the top and Ballard headed over from the resulting corner.

Rashica forced a good stop from Peacock-Farrell, however the Kosovan winger was adjudged to have been in an offside position when he took aim.

Kosovo were two up after 20 minutes. Rashica tricked his way past Conor McMenamin and whipped in a cross which was thumped home by Zymer Bytyqi.

Peacock-Farrell comfortably gathered a low drive from Rashica, while Ballard produced a timely block as Kosovo threatened again. And then Rashica shot straight at the Northern Ireland keeper from just outside the area before he produced a splendid save to deny Florent Muslija.

Ballard rose well to meet a McCann corner, however his header was comfortably collected by Kosovo keeper Samir Ujkani.

McMenamin, switching from the left flank to the right, fired a shot into the side netting from an acute angle as Northern Ireland tried to claw their way back into the contest.

Ballard cleared a dangerous Bytyqi cross over his own bar as Kosovo swarmed forward once more.

Northern Ireland pulled a goal back just before half-time. Brodie Spencer, making his first start for the senior team, sped down the right and clipped the ball to the back post where Shayne Lavery was on hand to head it into the net from two yards.

Substitute Gavin Whyte produced a decent cross which was cleared by the home defence, while Ballard tried to pick out another sub, Dion Charles, with a driven pass, however the ball ran through to Ujkani.

Northern Ireland made it 3-2 in the 83rd minute. Substitute Jordan Thompson whipped in a free-kick and Ballard rose above the home defence to score with a powerful header.

The closing stages were frenetic as Northern Ireland went in search of an equaliser.

Spencer played in a low cross which was met by McMenamin, however Kosovo substitute Betim Fazliji managed to block his shot. And then Ballard headed another corner past the post.

Ujkani punched a Thompson free-kick clear. The ball was met by substitute Conor Bradley but he could only steer his shot well over the top.

Northern Ireland will now look to bounce back when they face Cyprus in Belfast on Sunday.