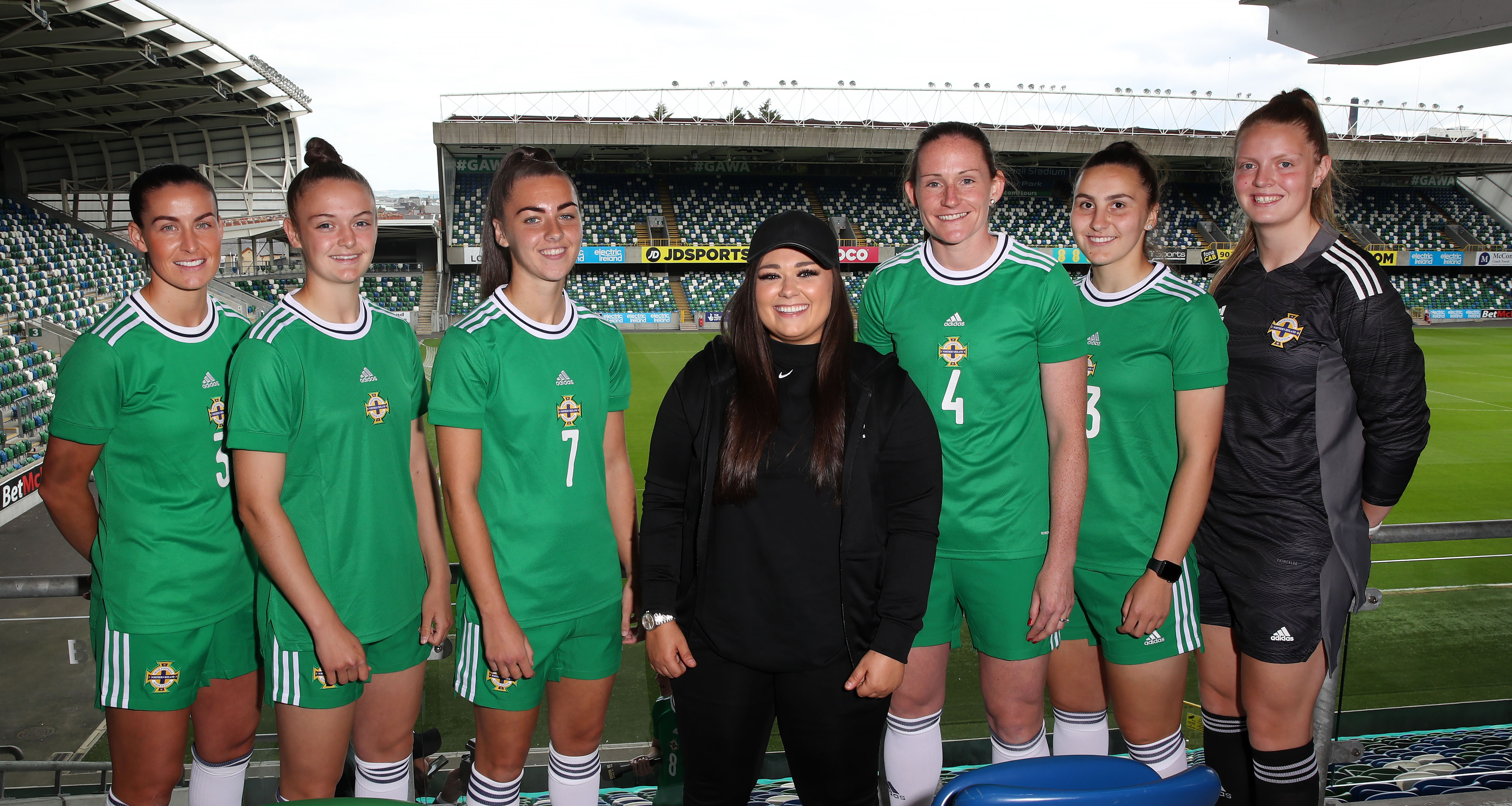 Northern Ireland’s countdown to the UEFA Women’s Euros 2022 kicks off today with the full release of the official song that will back the senior women’s team at the tournament.

‘Girl Got Game’, a feelgood, infectious two-minute pop track, has been recorded by Belfast-based artist Jessica Hammond in conjunction with the Irish Football Association.

It comes as the team, and the Irish FA, kick off a countdown of activity before the tournament starts in England on 6 July. Kenny Shiels’ side will face an away trip to Belgium in a friendly on 23 June  whilst later that day at the National Football Stadium at Windsor Park, there will be a fan focused event, held in conjunction with the Amalgamation of Northern Ireland Supporters Clubs, for those making the trip over the water followed by a special squad announcement event on 27 June, again to be held at the National Football Stadium at Windsor Park.

The release of ‘Girl Got Game’ marks the start of this final flurry focusing on the message of female empowerment. It features lots of Green and White Army singalong lyrics for good measure. Jessica started her music career at 14 on Disney’s 'My Camp Rock' performing alongside Demi Lovato and has worked with some top producers and Grammy Award-winning writers, including Amy Wadge (Thinking Out Loud/Ed Sheeran) and Ollie Jacobs (The Saturdays).

🙌 The official Northern Ireland women’s Euros song is out now! Search for @Jessicamusicx’s ‘Girl Got Game’ to use the song on your videos, show us your skills and tag @NorthernIreland! We’ll pick our favourite to win a Euros shirt! Good luck!👇 #GAWA

A highly skilled producer in her own right, she self-produces all of her own releases alongside her long-time collaborator and co-producer Matty Graham from their base at Black Studios in Belfast.

Her growing Spotify audience of 225,000 monthly listeners and over three million streams with releases on Irish label Paragon Records and European dance labels Chill Your Mind and Loudkult shows no sign of slowdown. She recently released the single ‘Hold You’ alongside well-known Belfast DJ and producer Hix.

Jessica said: “‘Girl Got Game’ is a female empowerment song. I wanted to write a song where the vibe was uplifting and motivating. I wanted to write lyrics using football terminology like ‘always ready to attack’ and ‘don’t take your eye off the ball’ while also keeping it vague enough to be relatable outside of the game, and to be a feelgood song for all women, even outside of the sport.”

Angela Platt, Director of Women’s Football at the Irish FA, said: “This summer will see levels of interest and excitement in our women’s and girls’ game at an all-time high. Our team have made history by qualifying for the Euros and I’m delighted to have Jessica’s soundtrack backing our team every step of the way.”

The song is released through Paragon Records.

If you are travelling to Southampton to support Northern Ireland in the EUROs, click here to ensure you don’t miss out on upcoming info and events’.

also, keep an eye out on Northern Ireland’s social media platforms for a series of special Euros preview shows as the tournament approaches.