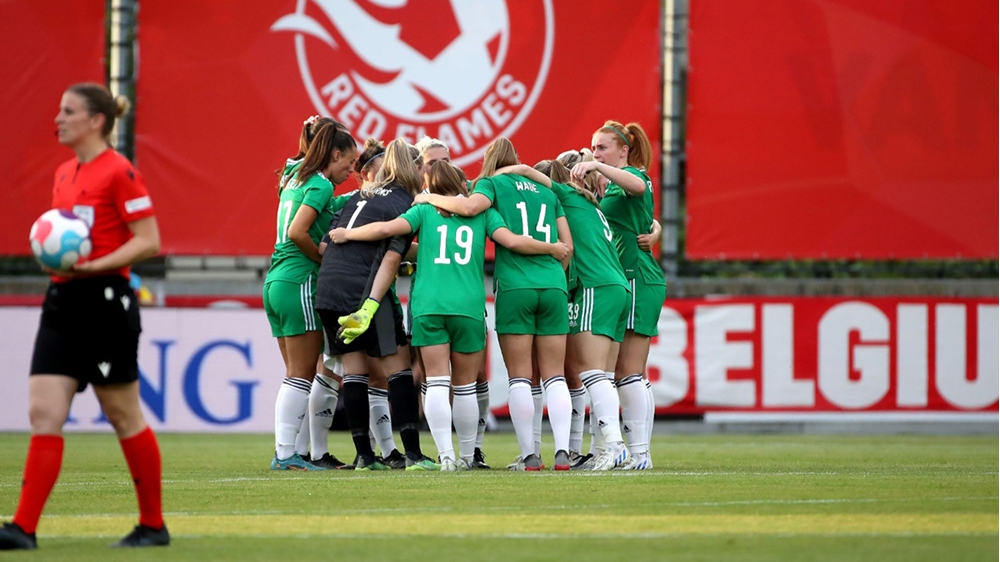 Northern Ireland Women suffered a 4-1 defeat against Belgium in their final warm-up match before this summer’s UEFA Women’s Euros.

Kenny Shiels’ side played the last 20 minutes of the friendly in Lier with 10 players after goalkeeper Jackie Burns was given her marching orders.

And the game stood at 1-1 until the final 10 minutes when the Red Flames piled on the pressure and scored three late goals.

Northern Ireland matched the Belgians for long spells, however the extra player proved crucial in the closing stages.

Shiels’ side started brightly in humid conditions in front of just over 1000 fans at the Herman Vanderpoorten Stadion.

Belgium keeper Nicky Evrard had to be on her toes to claw out a cross-cum-shot from Kirsty McGuinness.

Abbie Magee swung in a cross from the right which found captain Demi Vance at the back post, however she was closed down by a Belgian defender as she tried to launch the ball goalwards, and then Lauren Wade scuffed a shot wide of the target.

Magee produced a superb covering tackle to stop Belgium striker Hannah Eurlings in her tracks as she sped into the area. Minutes later Eurlings fired an effort towards goal which trickled past the upright.

Belgium took the lead in the 24th minute following a sweeping move. Laura De Neve played an excellent defence-splitting pass to set Davina Philtjens free down the left. She squared the ball to captain Tessa Wullaert who neatly tucked it into the bottom corner.

Magee fired in another cross which Evrard plucked out of the air before Eurlings lofted a shot high over the bar.

At this stage Belgium were enjoying the bulk of the possession, however Shiels’ side defended stoutly.

As half-time approached Kirsty McGuinness screwed a low drive wide of the post.

Northern Ireland equalised a minute into added time at the end of the first half thanks to a sweet strike from Wade. Kirsty McGuinness battled for the ball on the edge of the area and it dropped to the advancing Wade who blasted it superbly past Evrard.

At the start of the second half Vance pinged in a fine cross which went inches over Simone Magill’s head in the six-yard box.

Belgium substitute Elena Dhont jinked her way past a couple of defenders in the area before scooping a shot over the top as the home team began to crank up the pressure.

Jackie Burns dived full length to push away a well-hit shot from midfielder Tine De Caigny and Julie Biesmans’ effort was deflected out for a corner. Wullaert also flicked a header wide.

Burns was sent off in the 69th minute. The Northern Ireland keeper clattered Wullaert just outside the area as she bore down on goal and was immediately shown the red card. Becky Flaherty replaced her between the sticks.

Flaherty gathered well at the Belgian captain’s feet as the Red Flames fanned out across the pitch in an attempt to stretch the visitors’ defence.

Belgian substitute Davinia Vanmechelen clipped a shot wide of the target before Belgium regained the lead on 82 minutes when substitute Ella Van Kerkhoven got on the end of a Dhont cross and powerfully headed the ball home.

Minutes later it was 3-1 when captain Wullaert scored with a lovely strike from outside the area.

Belgium got their fourth as the final whistle approached. Flaherty pushed out a bullet Wullaert header and the ball bounced off Laura Rafferty to Van Kerkhoven who poked it home for her second goal of the game.

Next up for Shiels’ side is their first group game at the Euros – against Norway in Southampton on 7 July.