Northern Ireland Under-21s manager John Schofield has included two new faces in his squad for the upcoming home U21 Euro qualifiers against Lithuania and Malta.

The boys in green and white are set to face Lithuania next Friday (12 November) at Ballymena Showgrounds (2pm start) before taking on Malta at Mourneview Park in Lurgan the following Tuesday (16 November). It’s a 7.30pm kick-off.

The newcomers are Manchester City defender/midfielder Shea Charles, who has previously played for Northern Ireland’s U19s and U16 Schoolboys, and Ards striker Calvin McCurry, who played for his country’s U18 Schoolboys team a few years back.

Norwich City defender Sean Stewart, who has starred for both the Northern Ireland U17s and U19s in recent years, has been included in a U21 competition squad for the first time after playing in a couple of friendlies against Scotland’s U21s back in the summer.

Schofield has named a 22-strong panel for the home qualifiers.

Returning to the fold for the games are Watford midfielder JJ McKiernan and Newry City striker John McGovern.

Also back is Liverpool goalkeeper Liam Hughes, who was a late call-up to the senior squad last month. He replaces Cliftonville stopper Declan Dunne.

After losing away to second seeds Russia and top seeds Spain in October, the Northern Ireland U21s boss will be itching to put some points on the board this month in U21 Euro 2023 Qualifying Group C.

Northern Ireland currently lie bottom of the group with three points from four games, although they are only behind both Malta (fourth) and Lithuania (fifth) on goal difference. They began their campaign in September with a disappointing 4-1 defeat away to Malta. They did, however, defeat third-placed Slovakia at home in September.

And midfielder Ethan Galbraith, who had been captaining the side during the current set of qualifiers, has been elevated to the senior panel following his fine performances for Doncaster Rovers in EFL League One. He is on loan at Doncaster from Manchester United.

The Northern Ireland U21 squad for the qualifiers against Lithuania and Malta is as follows: 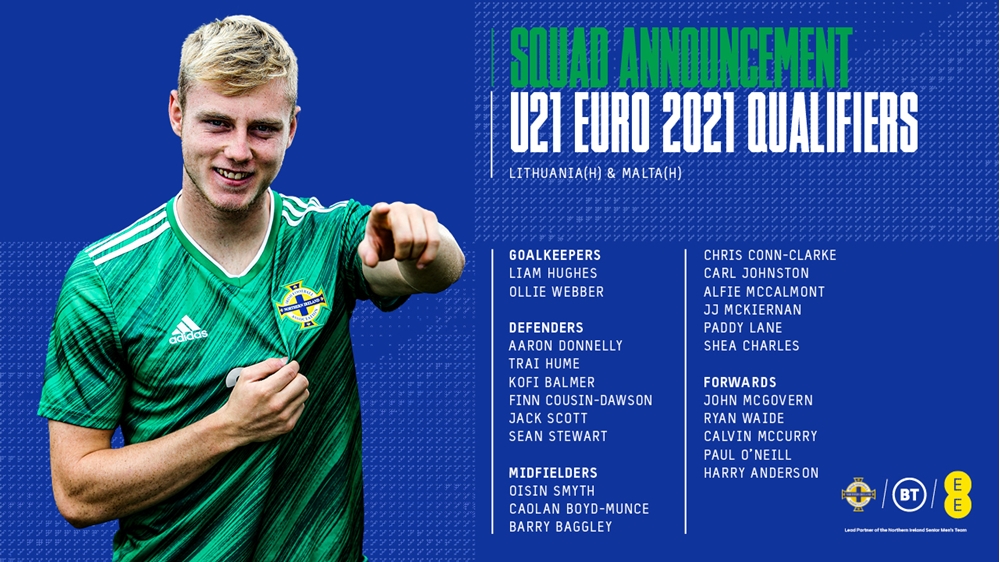