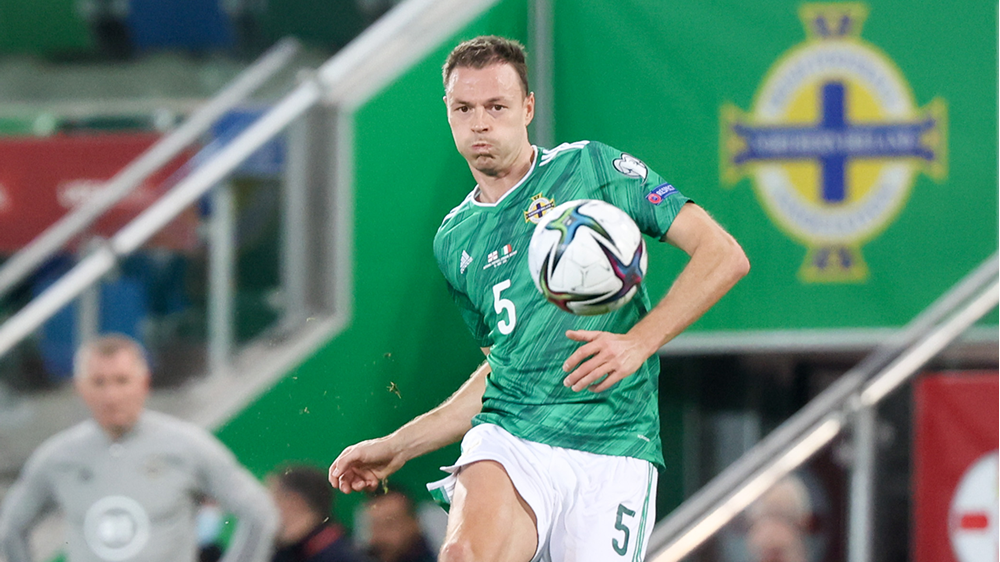 It was an una grande occasione as Ian Baraclough’s boys produced a superb display of grit, skill and spirit to secure third place in European Qualifying Group C.

Italy had the bulk of possession and chances across the 90-plus minutes, however Northern Ireland also produced some good opportunities and thoroughly deserved their point.

The result means Italy now have to navigate a play-off for a place at FIFA World Cup 2022 after Switzerland defeated Bulgaria in Lucerne to top the group and grab the automatic qualification spot.

The 16,000 sell-out crowd at the National Football Stadium at Windsor Park were treated to some bright and polished football from the Italians – and some resolute defensive work from the boys in green and white. It was a fascinating contest.

The Italians had the first clearcut chance. Lorenzo Insigne played a sumptuous ball over the top and Giovanni Di Lorenzo’s lofted shot was palmed away by Northern Ireland keeper Bailey Peacock-Farrell.

A minute later Gavin Whyte sped towards the Italian goal and was tripped by Italian midfielder Sandro Tonali, who received a yellow card.

Ali McCann delivered the resulting free-kick which was headed over the top by Tom Flanagan.

Nicolo Barella got himself into a shooting position but the midfielder’s effort was comfortably collected by Peacock-Farrell.

Five minutes later Insigne had a pop and Peacock-Farrell was equal to it. Federico Chiesa tried a low shot which was also held by the Northern Ireland goalie.

Peacock-Farrell kept out another Chiesa strike with his feet. It was a great save, however it would not have counted had it gone in because the offside flag was raised as he struck it.

The Italians poured forward at every given opportunity, however Northern Ireland’s compact midfield and defence chased and harried.

A superb covering tackle from Jonny Evans brought a huge cheer from the crowd as half-time approached.

Just after the break Insigne let fly just inside the area but his low drive drifted wide of the post.

Then Jamal Lewis teed up George Saville but Italian keeper Gianluigi Donnarumma spread himself well to keep out the midfielder’s snapshot.

Insigne had another effort, which was collected by Peacock-Farrell at the near post, as the game ebbed and flowed. Domenico Berardi fired in a free-kick which was also smothered at the near post by the Northern Ireland stopper.

On 63 minutes some fancy footwork and intricate play by the Italians eventually saw the ball make its way to Chiesa inside the area. His curling shot drifted past the post.

The Italians passed the ball quickly and accurately but found it difficult to get past the wall of green shirts.

In the 75th minute Conor Washington showed pace and prowess as he skipped past his marker and fired in a cross near the bye-line which was cleared for a corner. It was a fine piece of play from the substitute.

Emerson let fly from distance and Peacock-Farrell stretched full length to push the ball around the post.

On 81 minutes, after a move which involved several Northern Ireland players, the ball was played out to the onrushing Stuart Dallas, who hammered a shot well wide of the far post from outside the area.

Flanagan, who was superb alongside Craig Cathcart and Jonny Evans in the heart of the Northern Ireland defence, headed over his own bar as Italy piled on the pressure.

In the 90th minute Donnarumma fluffed his lines and the ball fell to Conor Washington 35 yards out. He sped towards goal but could only produce a scuffed effort which was eventually cleared off the line by Italy captain Leonardo Bonucci. Close, but not quite close enough.