Taylor and Southwood called up for qualifiers against Lithuania and Italy

Ian Baraclough has introduced two new faces to his squad for the home FIFA World Cup Qatar 2022 qualifiers against Lithuania and Italy later this month.

The Northern Ireland senior men’s team manager has given a first senior call-up to young Nottingham Forest striker Dale Taylor, who has previously played extensively at underage level for his country.

And completely new to the Northern Ireland set-up is Reading goalkeeper Luke Southwood. 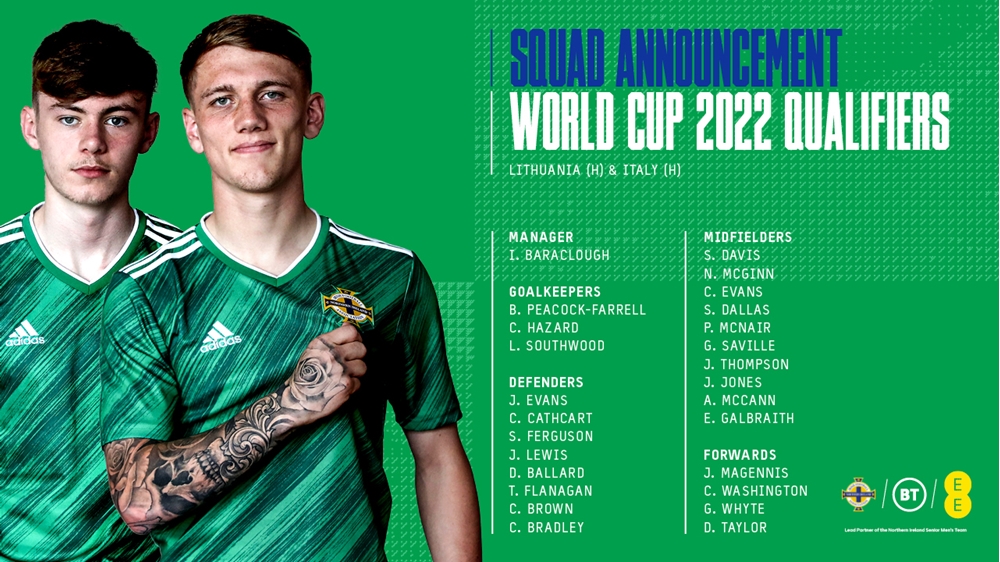 Taylor, who turns 18 next month, has been making waves at Forest since joining the EFL Championship side from Linfield in the summer of 2020. He has played for the club’s U18s and U23s and put in some top notch performances.

He also no doubt came to the attention of Ian Baraclough when he starred for Northern Ireland’s U21s in a friendly against Scotland back in June. He scored a peach of a goal in a 2-1 win in Dumbarton.

Southwood, who is 23, has been with Reading from the age of eight. Since returning to the club from a loan spell in Scotland with Hamilton Academical last season he has been the EFL Championship side’s first choice keeper.

Born in Oxford, the young keeper previously represented England at U19 and U20 level. He is eligible to play for Northern Ireland through a grandmother who was born here.

Baraclough has named a 25-strong panel for the games against the Lithuanians on Friday 12 November and the Italians on Monday 15 November at the National Football Stadium at Windsor Park.

Returning for this month’s double header are the Evans brothers – Leicester City defender Jonny and Sunderland midfielder Corry – who both had to withdraw from the squad ahead of last month’s away qualifiers against Switzerland and Bulgaria due to injury.

Preston North End midfielder Ali McCann, who missed October’s double header through injury, is back in the fold, too.

Also called up to the senior squad again is midfielder Ethan Galbraith, who has been captaining Northern Ireland’s Under-21s of late. Galbraith has been impressing at Doncaster Rovers this season after going to the EFL League One side on loan from Manchester United.

Meanwhile, Blackpool striker Shayne Lavery has failed to recover from the injury which kept him out last month, while Heart of Midlothian centre forward Liam Boyce is absent once again for personal reasons, and his Hearts team-mate Michael Smith is out of the squad due to injury.

Also missing out this time are Dundee United goalkeeper Trevor Carson, a late withdrawal from the last squad, and Leyton Orient striker Paul Smyth, who was a late call-up in October. There’s also no place for Accrington Stanley forward Dion Charles, who has had very little game time this season, or Sunderland midfielder Carl Winchester, who was a late call-up last time around.

Rochdale defender Ryan McLaughlin, who had to pull out of the Switzerland/Bulgaria group due to injury after receiving a late call-up, does not feature either, and nor does young Liverpool goalkeeper Liam Hughes. He is expected to go to the U21s, who also have two home games this month.

Northern Ireland squad for World Cup qualifiers at home to Lithuania and Italy: