Baraclough says his players can rise to the occasion against Italy 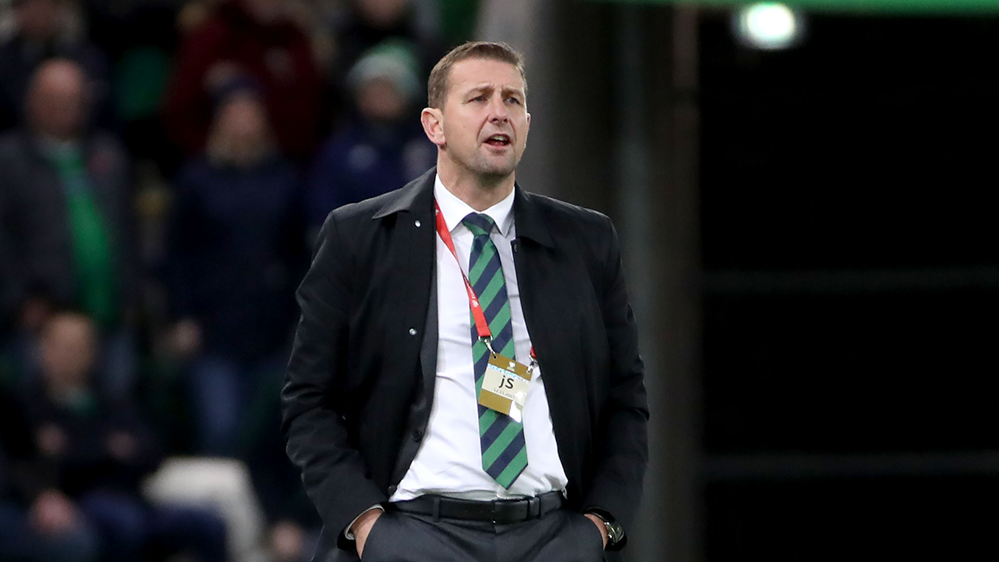 No matter what happens on the pitch in Belfast tonight it will be una grande occasione.

It’s not every day that the reigning European champions, and one of the best teams in the world, rock up to play Northern Ireland.

However, it’s a challenge Ian Baraclough and his team are really looking forward to – along with a 16,000 sell-out crowd and millions who will be watching the action on their televisions at home and abroad.

The football-daft Italian public in particular will be glued to their TVs, cheering on Roberto Mancini’s charges in the hope they can secure the victory that will guarantee top spot in European Qualifying Group C and automatic qualification to the FIFA World Cup tournament in Qatar a year from now.

Their draw with Switzerland in Rome on Friday has left both nations on 15 points from seven qualifiers (four wins and three draws apiece), although Mancini’s team have the better goal difference.

It means tonight’s match at the National Football Stadium at Windsor Park (7.45 kick-off) is a must-win for Italy.

The Italians have only lost once in their last 40 outings – that included a world record 37-match unbeaten run – so to say Baraclough’s boys will be up against it is a massive understatement.

However, the Northern Ireland boss is adamant his team can rise to the occasion in the final match of their World Cup 2022 qualification campaign.

In his matchday programme Manager’s View column, he says: “Northern Ireland taking another big scalp is long overdue and I can assure you that my players will be doing their utmost to do just that against the team ranked fourth in the world.

“Although there’s a lot at stake for the Italians, we also need a win to secure third place in the group ahead of Bulgaria and boost our ranking.”

He also reveals he was pleased with his side’s first half performance in particular in the 1-0 Group C home victory over Lithuania on Friday night.

And he adds: “Every player who pulls on the green shirt tonight will have to play at their optimum level if we are to pull off what many consider would be a shock result. And the players are well aware of that.

“I believe wholeheartedly in the players and their ability, and I feel they should have no fear going in to this match.

“It’s a fantastic opportunity for them to test themselves against some of the best players on the planet.”

Italy have arrived in Belfast without the defensive rock and national hero that is Giorgio Chiellini. The Juventus defender picked up an achilles injury ahead of this international window and is currently being treated back home.

And they are without influential midfielder Marco Verratti, who picked up a hip injury in his club Paris Saint-Germain’s 0-0 draw with Marseille in Le Classique last month.

Also crocked is the impressive Lazio striker Ciro Immobile, while Roma duo Lorenzo Pellegrini and Nicolo Zaniolo are missing through injury as well.

And up front they have Napoli sharpshooter Lorenzo Insigne and Torino frontman Andrea Belotti, who played alongside Kyle Lafferty in the Palermo team that won the Serie B title in 2013-14 under Gennaro Gattuso.

Juve strikers Federico Bernardeschi and Federico Chiesa are rather sharp as well along with Sassuolo star Domenico Berardi.

Donnarumma, Bonucci and Chiesa were all named in the team of the tournament at Euro 2020, which the Italians of course won back in July after defeating England on penalties in the final at Wembley.

Mancini is likely to deploy his favoured 4-3-3 formation against Northern Ireland. He told media yesterday that he does not intend to launch long balls into the box because that’s where Northern Ireland are strong defensively.

There may not be an incessant aerial bombardment, however Cathcart, Evans and co will have their work cut out to repel a sea of blue shirts that keep the ball on the deck and dart here, there and everywhere during fluid and often deadly attacks.

It should be a cracker tonight.