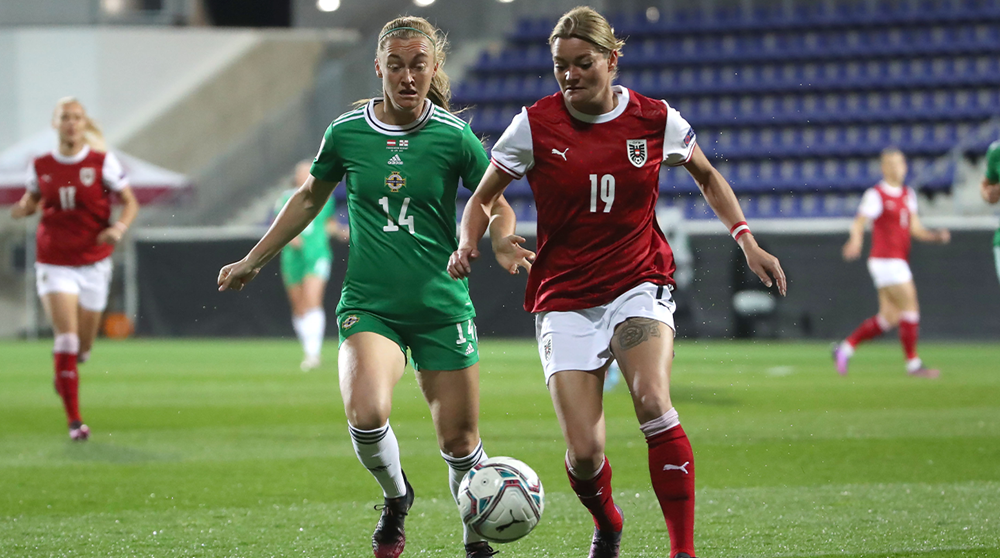 Kenny Shiels’ side never really got going against the Austrians, who won 3-1 to move three points ahead of them in European Qualifying Group D with three games in the qualifying series to go.

Goals from Austria captain Carina Wenninger, Nicole Billa and Barbara Dunst put the home side well on top before substitute Joely Andrews fired home a consolation for the visitors in front of 1,200 fans in Wiener Neustadt.

Northern Ireland, showing four changes from the team that started in the 2-2 draw against Austria back in the autumn, started brightly.

Demi Vance fired in a couple of corners that tested the home defence before Austria midfielder Dunst fired a shot wide.

In the 12th minute Northern Ireland keeper Jackie Burns was called into action to claw the ball away from the feet of striker Billa, who scooped a shot over the top minutes later.

At this stage Austria, showing just two changes from the starting eleven in Belfast back in October, were on the front foot in Stadion Wiener Neustadt and probing down the flanks with some neat interplay.

On 27 minutes Burns punched a delivery from a corner clear. The ball fell to Billa on the edge of the area and she blasted a shot inches over the bar.

The rain poured down and the wind began to swirl close to the half-hour mark and both sides struggled to get hold of the ball.

The next chance fell to Austrian midfielder Katharina Naschenweng who pounced on a loose pass and let fly from just inside the area, however her effort was smothered by Burns.

A Rachel Furness header from a Vance corner was cleared by the Austria defence and then Dunst’s drive flew wide of the post down the other end.

Just after the restart Austria took the lead through Wenninger. She lost her marker as a corner was delivered by Dunst and the skipper’s clever back-heel volley flew past Burns into the bottom corner.

Zinsberger stopped a goal-bound shot from Northern Ireland captain Marissa Callaghan before Austria doubled their lead in the 55th minute. Billa robbed the ball off Burns as she attempted to deal with a loose Julie Nelson back pass and the striker stroked the ball home from distance.

Two minutes later it was 3-0 to the Austrians. Laura Feiersinger fed the ball through to Dunst and she coolly slotted it past Burns.

On 66 minutes Callaghan slipped in Abbie Magee down the right, however her cross was cleared by the home defence.

Substitute Kirsty McGuinness stretched the Austrian defence with a run down the flank, but her cross-cum-shot was easily gathered by Zinsberger.

A Vance delivery from a free-kick found Furness inside the area, however she directed her shot well wide of the target.

Austria substitute Lisa Kolb showed the Northern Ireland defence a clean pair of heels shortly after coming on, although Burns held on to her rising shot.

Furness had a back post header plucked out of the air by Zinsberger as the girls in green and white showed more purpose.

Callaghan, who continued to press and probe, was unlucky to see her cross blocked after some neat footwork inside the area, and a Magill header was pushed away by Zinsberger.

Northern Ireland pulled one back through Andrews on 85 minutes. The substitute picked up a clearance from a corner and drilled it low and hard from long range through a sea of bodies into the bottom corner.

Austria sub Stefanie Enzinger hit the woodwork before another Northern Ireland sub, Megan Bell, tested the Austrian keeper with an angled drive, but it was too little, too late.