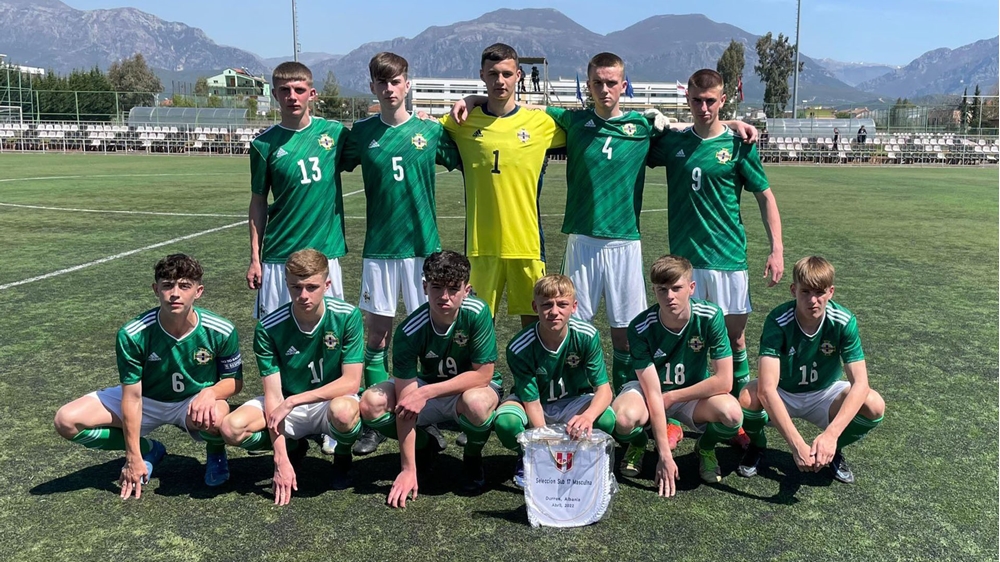 A stunning goal from Brendan Hamilton in the final minute helped Northern Ireland secure a 1-0 win against Peru in a four-team UEFA U16 development tournament in Albania.

The last gasp strike in their final match of the tournament meant Gerard Lyttle’s side finished second overall.

The Northern Ireland U16/U17 development team had previously lost to Luxembourg on penalties and to hosts Albania (2-1), so U19s and U17s boss Lyttle was delighted with today’s success.

The game at the National Team Centre in Kamez started at a ferocious pace with both teams having chances early on. Peru broke on the counter and forced a comfortable save from Mason Munn.

The first clearcut chance for a Northern Ireland side showing four changes from the team that started against Luxembourg came when a pinpoint pass from captain Ryan Donnelly put Cieran O’Hara through on goal, but his shot was straight at the keeper, who saved with his feet.

The energetic Donnelly won the ball back in midfield and found Bobby Harvey who then released Cole Brannigan, however the striker’s shot from outside the box was straight at the keeper.

Adamh Patton produced a fine piece of defending to keep Peru out. The Peruvians won the ball high up the pitch and slotted the ball to one of their strikers, however Patton forced the forward wide and his shot across goal from a tight angle did not trouble Munn.

After 23 minutes Munn kept Northern Ireland in the game with three unbelievable saves in quick succession.

Down the other end Jay McDowell put a cross in for O’Hara who turned his shot over from close range.

The second half produced fewer chances for both teams.

O’Hara put a header wide from a Hamilton corner, while Munn saved again low down to keep out a shot from the edge of the area.

Fra Turley won the ball before putting substitute Jack Hastings through on goal. Hastings tried to lift the ball over the onrushing keeper but it went wide of the goal.

On 80 minutes substitute Josh Briggs found himself free at the back post. He headed straight at the keeper.

As the game looked destined for penalties, substitute Sam Anderson won a free-kick 30 yards from goal in the final minute.

Fellow substitute Hamilton stepped up and fired in a thunderous dipping shot which clipped off the inside of a post and nestled in the back of the net. It was a wonderful strike.

The victory meant Northern Ireland finished second in the group with four points; they were awarded a point for drawing with Luxembourg in regulation time.