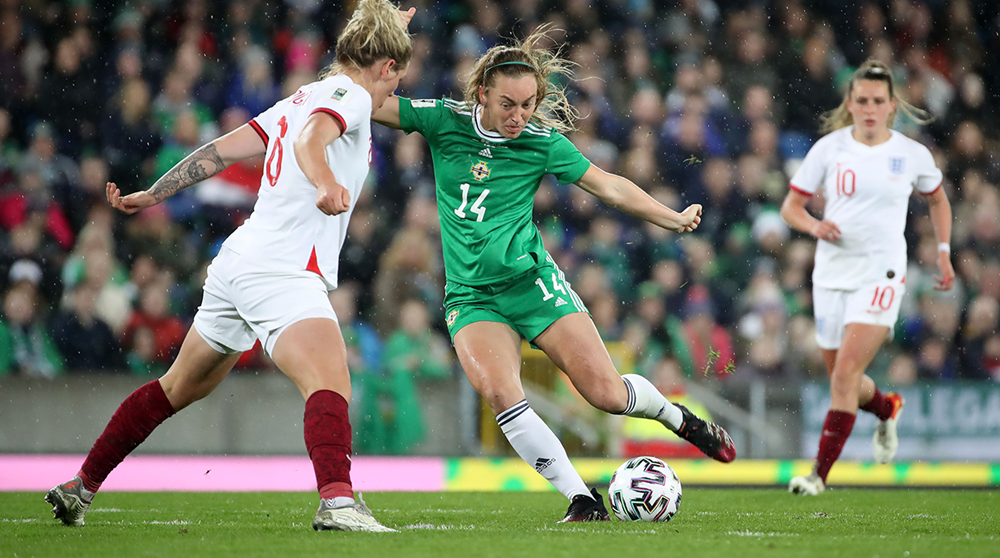 Two goals apiece from Lauren Hemp and Georgia Stanway, plus another from Ella Toone, saw Sarina Wiegman’s team seal a comfortable 5-0 victory in front of a record crowd of 15,348.

It was always going to be an uphill battle for Kenny Shiels’ side against one of the best teams in the world.

And it was backs to the wall for Northern Ireland for much of the 90-plus minutes as England launched attack after attack and cemented their place at the top of European Qualifying Group D.

The Lionesses pushed forward from the beginning, with the lively Hemp in particular looking to get forward at every opportunity.

The first chance of the game fell to prolific England striker Ellen White, however her header went well wide of the target.

In the 10th minute defender Sarah McFadden cleared the ball when a low shot from Beth Mead look destined for the back of the net.

Toone scooped a shot wide of the target before McFadden produced a superb block to keep out White.

Next to try her luck for the visitors was Lucy Bronze, whose rasping shot from an angle went inches past the post.

England had a goal ruled out shortly after. Northern Ireland keeper Jackie Burns pushed out a stinging shot from Mead and the loose ball was tucked in by White, however she was deemed to be offside.

Toone’s shot from distance was easily gathered by Burns as England continued to pile on the pressure.

England opened the scoring on 26 minutes. Hemp played a one-two with Toone and cleverly dinked the ball over Burns from eight yards. It was a sweet finish.

Julie Nelson made a couple of important interceptions as the wave of white shirts continued to flow forward and then her backline partner McFadden made another important block to keep out White.

A long ball over the top had Lauren Wade racing towards goal, however England captain Leah Williamson snuffed out the danger, heading the ball into the arms of keeper Mary Earps.

Hemp headed over the top as England stayed on the front foot and as half-time approached White glanced two headers wide of the target.

The second half began as the first ended, with England on the attack. White fired a low shot towards goal which was gathered in by Burns.

England doubled their lead on 51 minutes. Bronze used all her power and strength to force her way past a couple of Northern Ireland defenders and play the ball across the face of goal where Toone tucked it away.

Down the other end Burns did well to dive full length to push out a cross-cum-shot from Hemp.

However, Hemp grabbed her second of the night in the 60th minute when a pass from Williamson deflected off Nelson into her path. The winger rounded Burns and stroked the ball into the net.

England grabbed goal number four in the 70th minute. This time Toone turned provider as she fed Stanway and she coolly stabbed the ball past Burns.

Hemp slipped in substitute Bethany England but Burns saved well at her feet before Stanway grabbed her second on 79 minutes, clipping the ball home.

As the clock wound down Hemp was still full of energy and Burns had to smother a low drive from her, while Toone’s effort from distance was clasped by the Northern Ireland keeper and Millie Bright clipped the top of the bar with a rasping shot.

The two nations will meet again at Women’s Euro 2022 in July.