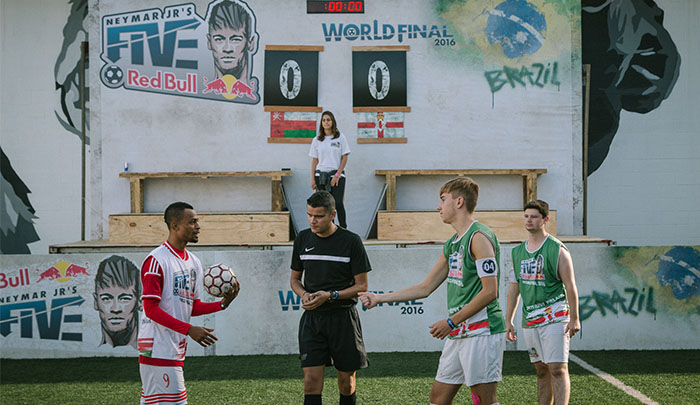 The team travelled from Belfast on Monday, embarking on a journey lasting over 24 hours to the home town of Barcelona and Brazil sensation Neymar Jr. Arriving on Tuesday the team held their first training session the following morning in typical Brazilian fashion as they took to the beach to familiarise themselves with their unfamiliar but spectacular surroundings.

The following day the Northern Ireland boys travelled to the stadium of Santos FC with the other 48 competing nations for the draw of the tournament. The draw, which took place overlooking the pitch which was once graced by both Neymar Jr and Brazilian legend Pelé, saw Northern Ireland drawn against Portugal, Mexico, Oman and Lebanon in Group D.

The tournament officially started on Friday at Praia Grande's Instituto Projeto Neymar Jr, with Northern Ireland facing a strong Mexico side. Unfortunately the team didn’t start well and were on the end of a defeat in their first match.

In their next match against Portugal the boys regrouped and adjusted their tactics to suit the fast-paced nature of the opposition. The Portuguese were undoubtedly one of the favourites for the tournament, but the Northern Ireland boys started well. They came out strong in the opening minutes of the match, with the opposition struggling to cope with the pace of the game.

Despite pressure from Northern Ireland’s Daniel Larmour and Darius Roohi, the opposition found a way through to take the lead against the run of play. The NI team, reduced to four men due to the nature of the game, continued to put pressure on Portugal but were unable to find a way through. The boys were on the end of some tidy passing and cool finishing ending in their second defeat of the tournament.

With the two toughest teams in the group out of the way, the boys carried their high energy pressing style into their penultimate group match against Lebanon. The team controlled the match from the first whistle with some great dribbling from Roohi and Thomas Macklin. Roohi opened the scoring in the match with a simple finish after some great work from Larmour.

Further goals from Roohi and Macklin gave the NI boys full control and with the opposition reduced to two men Chris Elliot scored an outrageous lob from inside his own half - a firm contender for goal of the tournament. Roohi then rounded off his hat-trick with the final goal of the match, finishing off the opposition.

The final group game against Oman required nothing less than a win to give the team a chance of progressing to the round of 32. The team came out strong in their usual fashion putting pressure on their well drilled opposition.

Northern Ireland controlled the match from the off but couldn’t find the breakthrough despite several shots on goal. The deadlock was eventually broken when a defence-splitting pass from Brian Trohear put Roohi through on goal who coolly finished to give the Northern Ireland team the lead and reduce the opposition to four players.

From this point Oman never really threatened the NI goal, with some strong defending from Elliot and Larmour. NI put the match to bed when top-scorer Roohi finished neatly from a tight angle in the closing minutes of the match. Despite further pressure on the Oman goal, the NI boys were unable to breakdown the three remaining opposition players and add to their goal difference.

With the match finishing up 2-0, the Northern Ireland team were very unfortunate not to progress in the tournament due to their inferior goal difference.