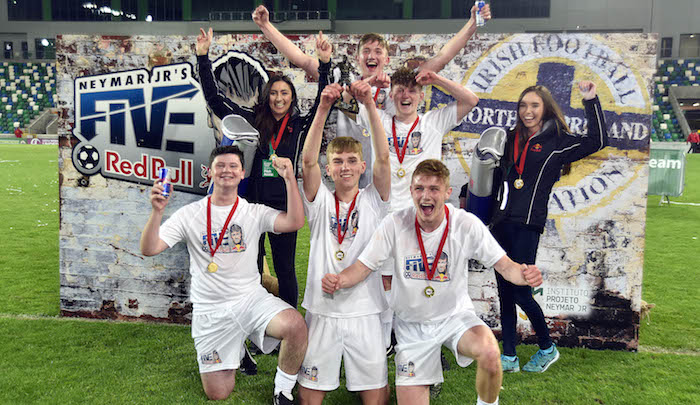 Northern Ireland’s Distillery Elite will be one of 50 teams from 47 different countries to compete in Neymar Jr’s Five, a fast-paced global signature 5-a-side tournament devised by Neymar Jr, Lionel Messi and Luis Suarez.

Northern Ireland certainly did their country proud at Euro 2016 recently by getting through to the final 16. Now five friends from Belfast and Co Down hope to make their mark also in the football arena, when they compete against 49 other teams representing 46 countries for the Neymar Jr’s Five title in Praia Grande, Brazil next week.

Their team, Distillery Elite beat off hundreds of other young 5-a-side teams in regional heats across the province, including DFC Dropouts in the final at the National Stadium at Windsor Park last month.

Captain Daniel Larmour (17) from Belfast and his team have been training hard over the last few weeks to get into shape for the tournament. He said:

“We are all friends so we decided to enter the competition for a laugh to be honest, but throughout the heats we got extremely competitive and just kept going. To win the national final at Windsor Park and play on the same pitch after Northern Ireland beat Belarus in their last home game before the Euro, was a dream come true.

“Most of us have just finished our A levels so we’ve been getting as much practice in as we can before we fly out to Brazil next week. We still can’t believe that out of nearly 11,000 teams worldwide, our team has made it into the last 50. What an experience and opportunity it is to be representing Northern Ireland in a global competition of this magnitude.

“We know we’re going to be facing some of the world’s up and coming new footballing talent but the lads and myself have been so inspired by our own national team that we are adopting their slogan ‘Dare to Dream’ as well, so watch this space!” said Daniel.

Each match is a fun, fast-paced and technical game and the teams are in for an energetic and tactical tournament with a special twist to it: the five-player teams lose one player each time they concede a goal until there are no players left, or the 10-minute game ends, which makes it even more exciting.

Neymar Jr, who alongside Lionel Messi and Luis Suarez has lit up La Liga with Barcelona this season, helped devise the format for Neymar Jr’s Five and will also have the winning team as his guests at a match at the Camp Nou in Barcelona, Spain.

The world final will July at the Instituto Projeto Neymar Jr in the state of Sao Paulo, Brazil. The institute’s aim is to offer extracurricular educational and sporting activities to the most socially disadvantaged children and families to promote social inclusion and encourage participation in the community. The Instituto Projeto Neymar Jr was opened in 2014 and is the second 'FutbolNet' program in Brazil in partnership with FC Barcelona Foundation after a first was set up in the favelas in Rio de Janeiro two years earlier.