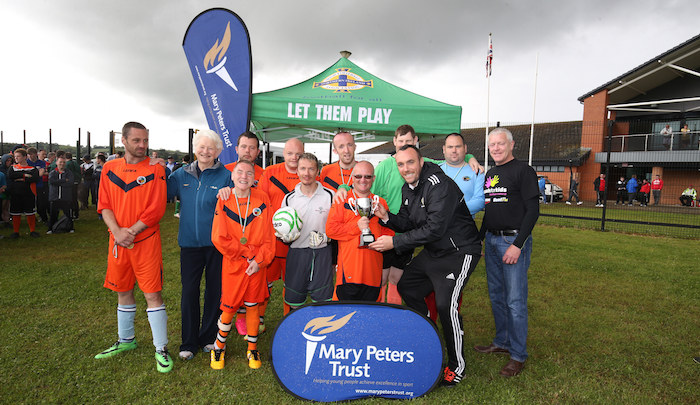 Over 500 players from 70 Disability Football Clubs throughout the UK and Ireland descended on the Billy Neill complex in Dundonald this week to compete in the 2016 George Best Community Cup.

With over 300 games on 12 pitches in four ability bands the action was fast and furious throughout. The George Best Community Cup is an annual 5-a-side cup competition for clubs catering for players with a disability. It is run by the Irish Football Association and supported by the George Best Foundation and Cash for Kids through the Mary Peters Trust.

Northern Ireland based clubs did exceptionally well this year, winning three out of the four cups on offer. Lisburn Special Olympics club won Ability Level 4 beating Dundrum Special Olympics, Ireland in a tight final. Ability 3 was won by Henshaws UTD from Newcastle, England who defeated Llandudno C from Wales in the Final. Ability 2 was won by newly formed Glentoran Disability FC although they did require penalties to see off the challenge of Llandudno B. Foyle Belles of Londonderry won the top section for the third year in a row defeating local visual impairment club Lisburn Rovers in the Final.

The 2016 George Best Community Cup was the biggest one to date in terms of competing clubs and number of matches. Tournament organiser and Irish FA Disability Football Development Manager, Alan Crooks was delighted with the event, ‘The support we get from the George Best Foundation through the Mary Peters Trust has enabled us to develop the competition to the size it is today. It was great to see so many visiting clubs from the mainland including the disability sections of several Football League Clubs like Bradford City and Charlton Athletic. The football was exciting in all four bands and it was good to see so many players of all ability levels getting the opportunity to play competitive football. Congratulations to all the players, coaches and volunteers who made the 2016 George Best Community Cup a memorable one’.

Dame Mary Peters CH DBE said, “It was a joy to see all the competitors taking part in football representing their team, I was particularly delighted to see some females taking part too. This is such big event now, it has grown in stature the organisers should be very proud.  Cash for Kids and the Mary Peters Trust are delighted to be part of this tournament and hope to continue this partnership into the future.”