Abbey Primary School was gripped by football fever today when a trio of Northern Ireland international players made a surprise visit to the Newtownards school as part of M&S Food’s Eat Well, Play Well partnership with the Irish FA.

Conor McMenamin, Marissa Callaghan and Simone Magill dropped by the Co Down school to announce that its football team have won a training masterclass with the Northern Ireland international teams.

M&S Food has partnered with the Irish FA to use the power of football to help families make healthier choices under the ‘Eat Well, Play Well’ campaign banner.

It was great to be part of the big reveal. The kids were so excited when they found out that the school had won the prize. I hope they really enjoy the masterclass

As part of the partnership M&S Food Eat Well and the Irish FA launched a competition for youth football teams to win a training masterclass with the Northern Ireland national football teams. 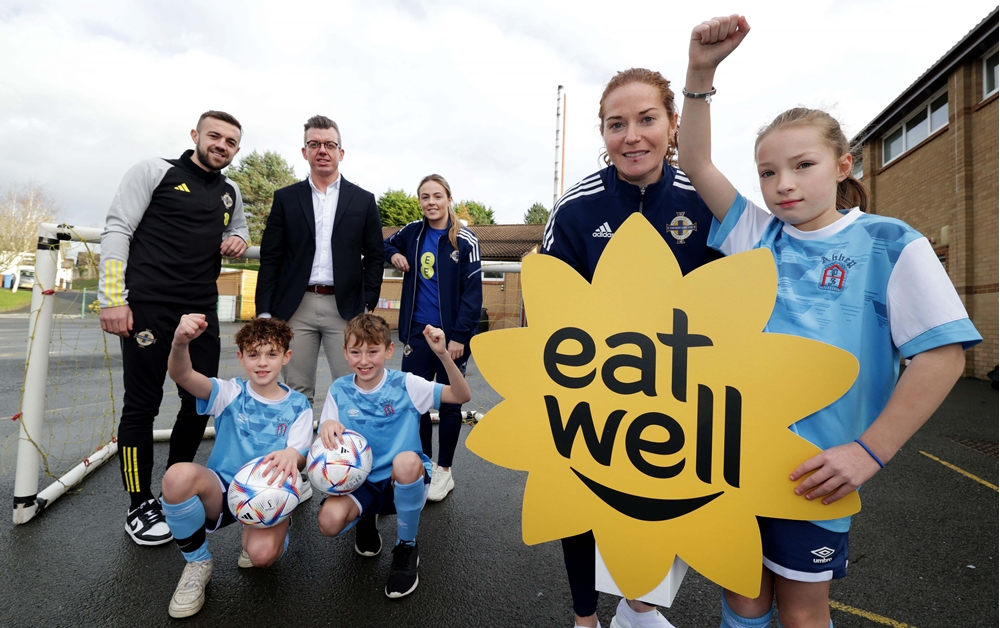 All customers had to do was buy an Eat Well product from an M&S Food store across Northern Ireland with their Sparks card, or app, to be entered into the draw.

The competition prize won by the budding young Abbey PS footballers is a training session with their Northern Ireland heroes, where they will be put through their paces with a series of drills and tactics to help them develop their skills and have fun.

Expert coaches at the Irish FA will teach them important qualities such as respect, discipline and teamwork as well as promote the importance of healthy eating and physical activity.

Jonny Manning, Principal of Abbey PS, said: “The boys and girls in the team are stunned to have been selected for this once in a lifetime opportunity, and what better way to find out than have three current Northern Ireland stars drop by and surprise them in front of their class.

“We want to thank M&S Food and the Irish FA for making this dream a reality and we look forward to our pupils running out on to the training pitch alongside their Northern Ireland football heroes.”

Marissa Callaghan, captain of the Northern Ireland senior women’s team, said: “It was great to be part of the big reveal. The kids were so excited when they found out that the school had won the prize. I hope they really enjoy the masterclass.”

The M&S Food ‘Eat Well, Play Well’ campaign links the eating habits of Northern Ireland’s footballing heroes to how they play, promoting positive healthy eating messages for kids in a way that’s engaging, relatable and drives change. As well as the training masterclass there were thousands of other prizes up for grabs including match tickets, kits, equipment, signed merchandise and Eat Well products.

Eat Well is a health seal of approval found on thousands of M&S products, making it easier to be healthy. Every product with the Eat Well flower has a health benefit and supports a balanced diet.