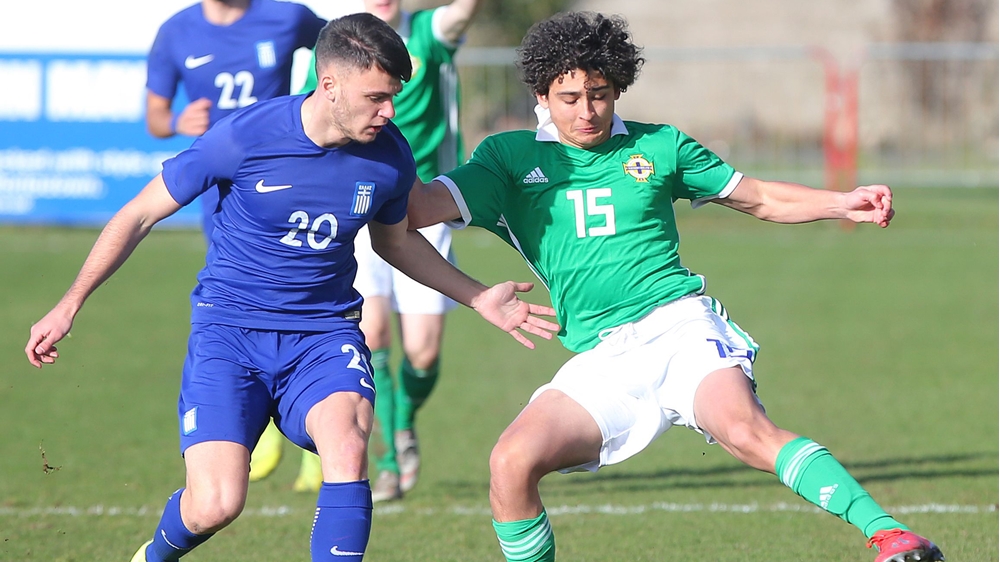 Northern Ireland U17s manager Stephen Frail has named his panel for the elite round of the 2019 U17 Euro qualifiers later this month.

Frail is bringing a 20-strong squad to the Netherlands for matches against the Dutch, Czech Republic and Israel.

Included in the panel is attacking midfielder/winger Barry Baggley, who made his senior debut for Fleetwood Town at the weekend.

And he is joined by Fleetwood team-mates Dylan Boyle and Carl Johnston. All three came through Club NI, the Irish FA’s elite development programme.

In fact the bulk of the squad have made the transition from Club NI, which is run by former Northern Ireland international Jim Magilton, to the U17s set-up.

Ben Wylie (Celtic), who scored a hat-trick for the U17s against San Marino back in the autumn, returns to the panel after missing out on last month’s warm-up games against Greece’s U17s.

Linfield goalkeeper David Walsh, who missed the February games through injury, is also back along with Chelsea defender Sam McClelland, who missed the games against the Greeks due to club commitments on the European stage.

And both Manchester United goalkeeper Dermot Mee and Wigan Athletic midfielder MacKenzie O’Neill have retained their places in the squad after receiving their first call-ups for the games against Greece, which both ended in narrow defeats.

Also retaining their places after making their U17 debuts in February are St Oliver Plunkett defender Sean Stewart, who has shone with Club NI and Northern Ireland Schoolboys in recent years, and Glenavon forward Ross Hunter.

Almost half of the squad are connected to Northern Ireland clubs, while the rest are mainly on apprenticeships with clubs in England or Scotland, and there’s one player from the League of Ireland, Darragh Burns of St Patrick’s Athletic.

This month’s elite round of 2019 U17 Euro qualifiers in the Netherlands is being staged in Den Haag (The Hague).

The opening fixture for Frail’s side in the mini tournament is against the Dutch next Wednesday (20 March) at Sportpark Juliana (1900 CET), while Northern Ireland will take on Czech Republic at the same venue on Saturday 23 March (1300 CET).

The U17s’ third and final game in the group, against Israel, is on Tuesday 26 March at Sportpark Zeggersloot (1900 CET).

Frail’s team booked their place in the elite roundback in the autumn by finishing second in their group in stage one of the qualification process. They narrowly lost 1-0 to eventual group winners Slovakia, held host nation Turkey to a 1-1 draw and then hammered San Marino 6-0.

Eight elite round group winners and the seven runners-up with the best records against the teams that finish first and third in their sections will join hosts Republic of Ireland in the finals from 3 to 19 May.

Northern Ireland U17s squad for 2019 U17 Euros qualifiers elite round:

Image: Wigan’s MacKenzie O’Neill, who made his debut for Northern Ireland U17s last month, has retained his place in the panel for the 2019 U17 Euro qualifiers elite round, which begins next Wednesday in the Netherlands.